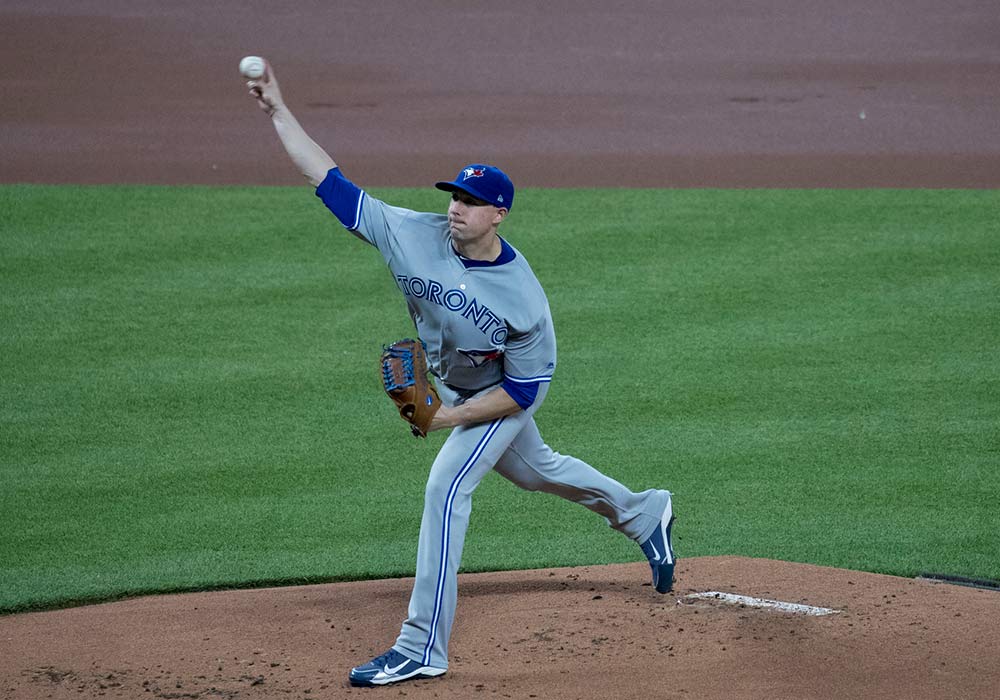 Exercises like these are fun to do but usually end up in embarrassing fashion a year later. Still, that’s not going to stop us from plowing forward with some bold predictions for the Blue Jays in 2018. Criticism is welcomed, and even encouraged. Share your thoughts in the comment section below.

Aaron Sanchez Will Move to the Bullpen

I fear that Sanchez will once again have trouble staying healthy in 2018. He last appeared in a game on July 19th and was shut down for good in September. He then took three months off from throwing, picking up a ball on December 12th to play catch. That’s a heck of a long time off. This suggests to me that a recurrence of the fingernail injury in 2018 could derail his season again in a big way.

If the friction to his finger caused by the curveball’s high rate of spin is a concern, the Jays could move him to a late inning relief role where he wouldn’t need to throw as many. His two-seam fastball would play up as well. In 2015 when he made 30 appearances in relief, he threw just 9% curveballs. In 2017 his curveball usage jumped to 17%, which may be too high for him.

Sure, losing his 25-30 potential starts in the rotation would be a big blow. But if the Jays don’t think he’s capable of that anyway, leveraging him in a late inning role could be like adding Wade Davis-like production at under $2 million. There would be a lot of value in that.

So while this sounds like a negative prediction, it could turn out alright for the Jays.

Carrera made legitimate improvements to his batted ball profile last season and ended up hitting 7% better than league average. This was by far his best offensive season. He’s still not going to hit the ball particularly hard – his 25.8% Hard Hit percentage was 2nd worst on the team (minimum 200 PA) to only Darwin Barney – but by retaining the changes to his launch angle made in 2017, he can maintain a higher BABIP. If his plate discipline improvements also hold (9.2% walk rate was a career high), a .340 OBP is not out of the question.

I also suspect that the Jays will add a left fielder between now and Spring Training. While this will take away from plate appearances, it will also allow the Jays to shelter Carrera’s matchups and inflate his offensive rate statistics. He’s never had drastic platoon splits so his 2017 production against lefties (.086/.220/.114) was a bit strange to see. But his .120 BABIP was driven by bad luck and he actually walked 14% of the time (compared to just 8.5% against righties). This suggests that he should actually fare well enough against left-handers in the future.

A 110 wRC+ would be a new career high for Carrera. But I think he can buck the projections and do it.

Left-handed pitcher Ryan Borucki was one of the biggest risers in the Blue Jays system last season, starting at single-A Dunedin and finishing the year with one start in Triple-A Buffalo. He kept the ball in the yard and maintained a sub-3 FIP at every level. Even though he’ll probably start the 2018 season in Buffalo, Borucki could be an early call-up, especially if the aforementioned injury issues to Aaron Sanchez persist.

Of course, with good health in the rotation and an offseason addition of someone like Alex Cobb or Lance Lynn, Borucki won’t see 20 starts. But given the Blue Jays’ penchant for spending very little money on pitching, they could elect to add only depth arms behind Sanchez, Marcus Stroman, J.A. Happ and Marco Estrada. This would give Borucki a legitimate shot to claim the 5th spot in 2018.

Borucki will probably never be more than a back-of-the-rotation starter, and that’s if he sticks as a starter at all in the majors. But he has the physical attributes and a good enough changeup to have a really good chance. He gets ground balls and can handle right-handed hitters. The ingredients are there.

Danny Jansen Will Get Rookie of the Year Votes

His bat looks ready for prime time. The only question is if his receiving is major league ready. I think the Jays will take Jansen’s training wheels off and his bat will keep him in the lineup. If Martin is banged up (which is entirely possible given his workload and age) Jansen will take the starting catcher role and run with it. I wouldn’t be surprised to see a batting line of .270/.330/.440 from him and 300 or more plate appearances.

That might be aggressive for a catcher who just had his first taste of Triple-A at 22 years old, but this article is titled Bold Predictions for a reason. I’m betting on big things from Jansen. Max Pentecost had been the prospect fans were holding out hope for as the catcher of the future. But Jansen has firmly surpassed him.

Jansen probably won’t finish high in Rookie of the Year voting, but he’ll get some down-ballot votes and convince Blue Jays fans that he’s the heir apparent to Russell Martin.

Apologies for ending on a negative note, but I see Pillar’s best days as being behind him. We know that defensive ability declines with age, and we know that on average it starts happening at Kevin Pillar’s age. Of course plenty of 29 year old outfielders have performed at a very high rate and many will continue to. Maybe Pillar is one of them. But his overall value as a player is entirely dependent on his defence unless he completely transforms his ability to hit. There is little room for error.

After more than 2,000 career plate appearances it’s probably safe to say that Kevin Pillar is what he is at the plate – a well below average major league hitter. It’s also possible that Pillar’s style of play in the field takes a toll on his body. There’s a fine line between exciting and reckless, and injuries are always a risk. His sprained thumb that kept him out for two weeks in August 2016 is the only blemish on his record. It’s impossible to predict injuries of this nature but it has to be a consideration as a player ages.

Pillar provided just 1.9 fWAR last season over 632 PA after defensive metrics like UZR were down on him. The most notable component of UZR to drop was Range Runs Above Average. In the past three years his Statcast sprint speed has declined too, from 28.6ft/sec in 2015 to 28.0 in 2016 to 27.9 in 2017.

I fully expect Pillar to keep making highlight reel dives in centre field, but if he continues to cover less ground than he has in the past, his statistical value will lag behind the eye test. Steamer projects him be worth 2.8 WAR next year but I think that’s at least a full win too much.

I’d even go so far as to say that the Jays should sell high on Pillar while they can. But that’s an argument for another day.