When the Blue Jays signed Shun Yamaguchi last winter to a two-year contract, the expectation was that the 32-year old right-hander would provide back-of-the-rotation depth, or long-relief in the bullpen. Yamaguchi had thrown 170 innings in 2019 for the Yomiuri Giants and 154 the year before. He also lead the league in strikeouts in 2019.

Clearly that has not been Yamaguchi’s role in the early going. Manager Charlie Montoyo used him in two late game situations and the results were disastrous. It didn’t help that the leverage index after those two appearances was the second highest on the team, behind the recently departed Brian Moran.

Drawing conclusions about Yamaguchi after facing 12 batters in his MLB career is premature, but we can have a look at the small sample of Statcast data to see what Yamaguchi’s done under the hood. (It’s important to note that last year MLB started transitioning from Trackman to Hawk-eye as ballpark tracking technology for Statcast. There have been reports of unreliable data early on and comparisons to pre-2020 stats might be skewed. Despite this, I think there’s some useful info as it pertains to Yamaguchi.)

Yamaguchi’s thrown mostly a three-pitch mix so far: Four-seam fastball, slider, his changeup, and just a single curveball. We’ll refer to his changeup as a splitter from here on out, which is his well-documented “out pitch”.

According to Jim Allen, baseball columnist for the Daily Yomiuri, Yamaguchi used his splitter 26.6% of the time, his fastball 43.7% (with an average velocity of 90.2 mph), his slider 20.2%, and his curve 8.2% in Japan. That’s pretty close to his usage so far in North America.

In 2019 Yamaguchi induced ground balls at a rate of 49.2% (the Japan Central League average was 48.0%) which is what you might expect from a pitcher with a good splitter.

His early results have been ugly but let’s see what Statcast’s more advanced metrics think of him.

Taking a deeper look at his pitch properties seems like a more useful exercise since velocity, spin and movement become reliable fairly quickly. Let’s look at the pitch he used more than 40% of the time in Japan.

Classified as a four-seamer by Statcast as well as the aforementioned Jim Allen, Yamaguchi’s fastball actually behaves a bit like a two-seamer. Its spin rate of 2133 rpm is well below average for four-seamers (12th percentile) and its 23.47 Bauer Units (RPM / MPH) is in the 21st percentile. Its 10.8 inches of horizontal break is 42% more than similar four-seamers according to Statcast. That’s a lot of arm-side run.

As has been the trend lately, pitchers are working up in the zone more with high spin fastballs paired with breaking balls low in the zone. Yamaguchi’s fastball spin rate and velocity don’t seem to fit with this profile, but he should still be throwing his fastball up. The following chart is average exit velocities on two-seamers thrown 92 mph or slower in 2019.

Even at a lower velocity, and with more horizontal movement than typical four-seamers, fastballs up in the zone produce lower exit velocities than those down in the zone.

To lefties, Yamaguchi has kept the fastball on the outer part of the zone, and mostly up. 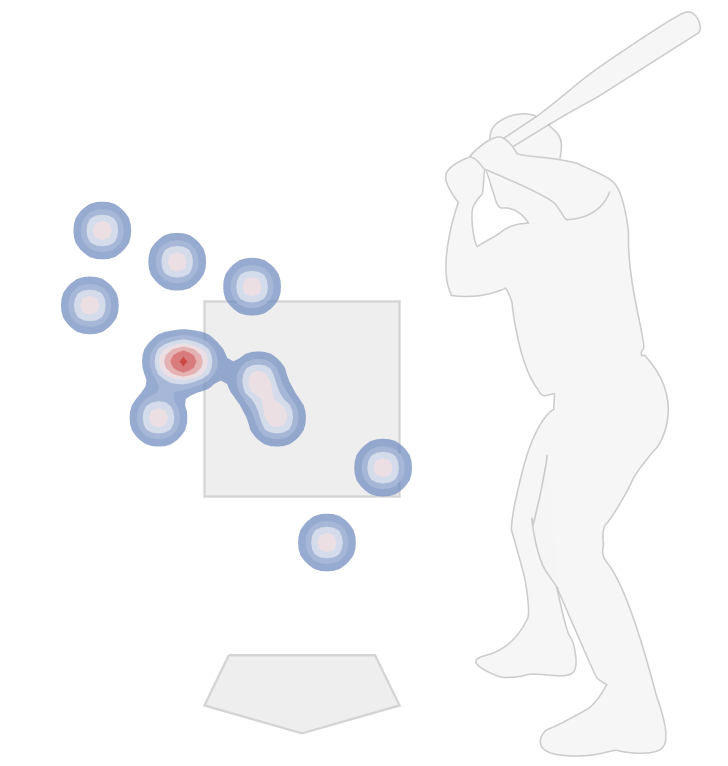 It’s a different story to righties, with too many catching the heart of the plate. 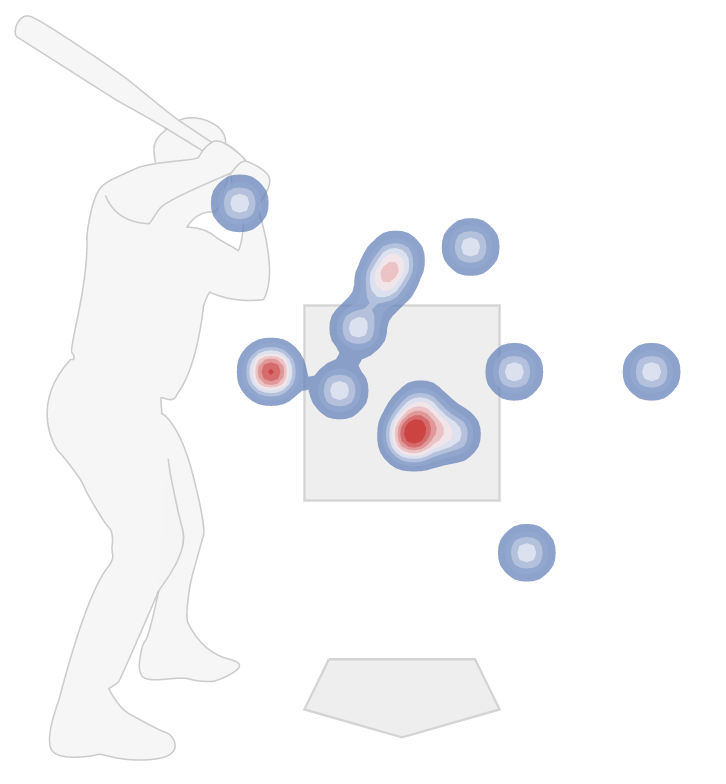 His two-seamy four-seamer probably won’t be an out pitch at the major league level in its current form. Better command to right-handed hitters is a must. And there’s always the potential for a velocity increase working in shorter outings out of the bullpen.

Yamaguchi’s 90.2 mph average fastball velocity in Japan was as a starter. Before the coronavirus shut down Spring Training, the Jays had been stretching out Yamaguchi to fill a multi-inning role. His current average velocity of 91.0 mph reflects this. But if he continues pitching in shorter stints, it’s possible that he could add a tick or two more to his fastball.

There is also the possibility that he’s still adjusting to the MLB ball, which is noticeably different than its Japanese counterpart. Said Yamaguchi in February:

“The ball itself is slightly bigger,” Yamaguchi said following his start. “The seam, it’s a little lower than the ones in Japan, so I’m trying to make adjustments there.”

It’s hard to be patient in a 60 game sprint but that’s all we can do, while hoping that Montoyo uses him in low leverage situations until he finds his groove.

Yamaguchi has thrown just 8 splitters to right-handed hitters but has produced a whiff on 4 of them. You can see why it could be a real weapon for him when he locates it down and in.

His slider command hasn’t been good so far. He’s thrown 15 of them and the average exit velocity has been 95.2 mph to go along with a 1.500 SLG against. He’s hung a few up in the zone, one of which we’d probably like to forget. Jansen sets to receive the pitch at the bottom of the zone but it ends up middle-middle.

Location issues are to be expected as he acclimates to the MLB ball. Hopefully he develops the feel and grip he needs soon to command all his pitches.

Another aspect of MLB that’s different from Japan is that there’s more of an emphasis here to lift the ball and hit for power. Learning how his pitches play against hitters with a different philosophy is a process, and one that may require some adjustments and growing pains along the way.

The two-year contract indicates a belief from the team that he’ll provide meaningful innings, but the modest salary means the risk is low. Hopefully the Jays don’t need to use him as a starter, as that would indicate a rash of injuries or severe underperformance from the current group. But he has a strong track record and you could do worse than Yamaguchi as the 8th or 9th starter on the depth chart. And if he’s ticketed for shorter outings as a reliever, he could thrive there with a starter’s repertoire.