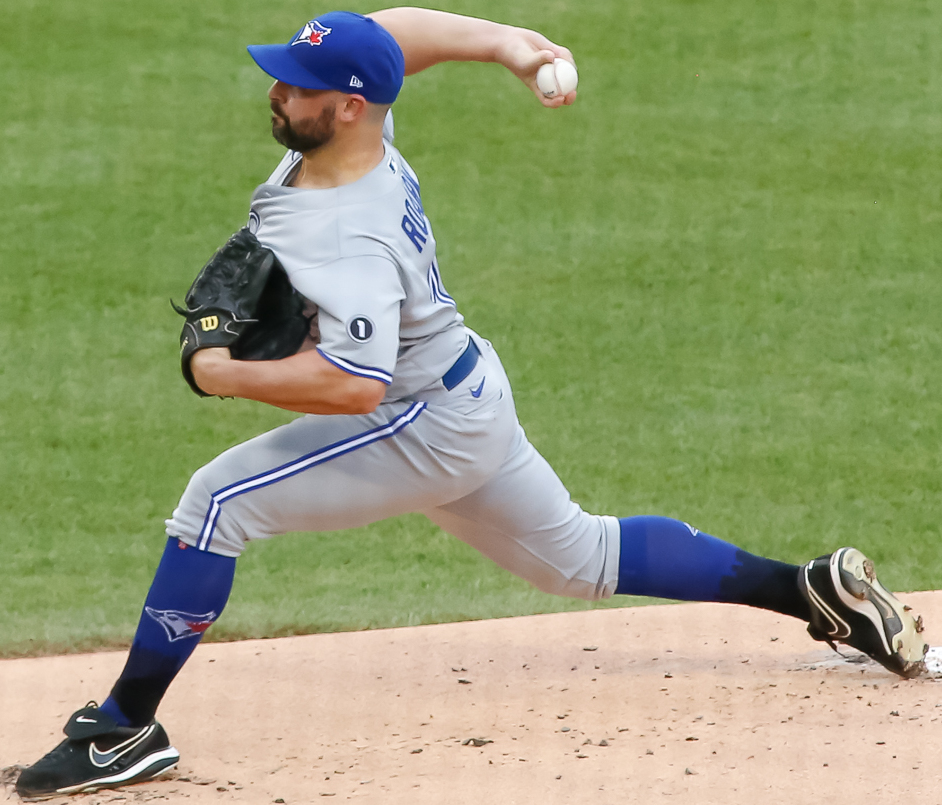 Tanner Roark has struggled in 2020, to put it mildly. This isn’t the pitcher the Jays expected to get when they signed him to a 2-year $24 million contract. What was supposed to be a reliable innings eater is now a liability, as he’s pitched to a 7.01 ERA and a 1.74 WHIP through 10 starts. His 2.89 home runs per nine innings is nearly triple his career rate.

His two fastballs are being crushed. The four-seamer is getting tuned up to a .685 SLG and the sinker a truly dreadful .889 SLG. He’s had only one start this year (August 19th) where both four-seamer and sinker produced exit velocities lower than league average.

Since he throws his fastballs a combined 56% of the time, this is problematic. A quick look at his heat maps give clues for why this could be happening.

In 2019 his four-seam fastball was nicely located up in the zone. This year he’s thrown too many middle-middle. 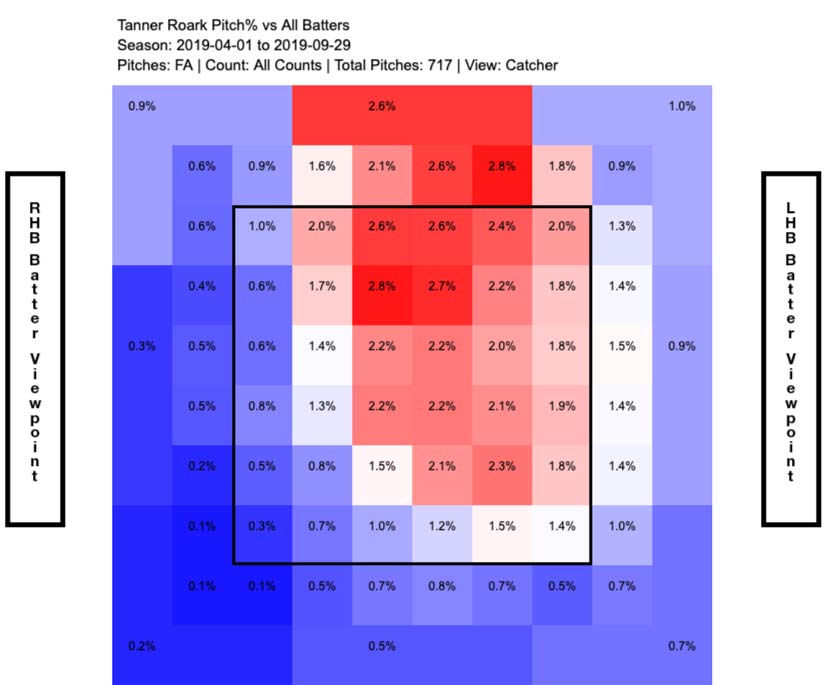 It’s particularly hurt his effectiveness versus right-handed hitters, as the four-seam whiff rate has plummeted from 25% in 2019, to 12.2% in 2020.

Righties have also feasted on his sinker this year slugging an unbelievable 1.179 against the pitch. He’s thrown only 104 of them so there’s probably some small sample weirdness happening. His .894 xSLG suggests he’s been burned by bad luck to some degree as well.

These reverse platoon splits don’t line up with his career 3.63 FIP vs righties and 4.71 FIP vs lefties, further suggesting some odd fluctuations due to the limited sample.

Roark’s average fastball velocity sticks out like an obvious reason for his struggles – it’s been 1.5 mph slower in 2020 than 2019 – but that can be explained by the short Summer Camp. Like a lot of pitchers this year it’s taken some time to regain velocity and he’s back closer to where he was last year. 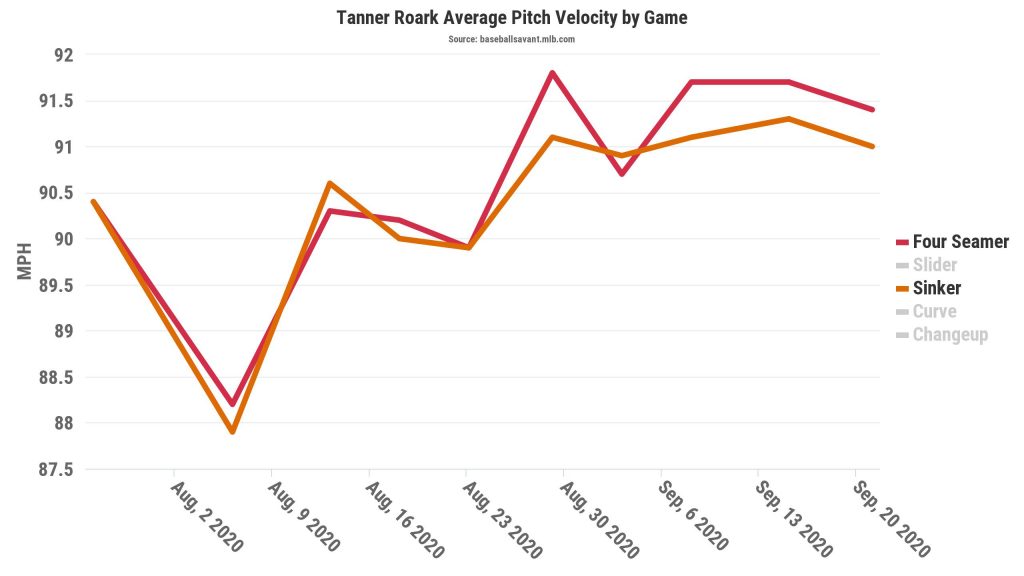 Something a bit more subtle has changed – where he sets up on the mound.

In 2019, Roark spent most of the season positioned near the middle of the rubber, slightly towards the third base side. 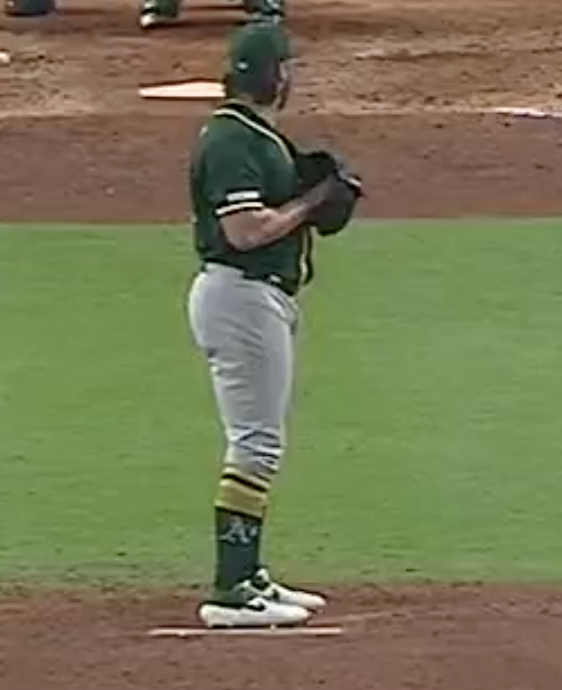 As a Blue Jay, Roark has moved significantly towards the first base side. According to Brooks Baseball, his average horizontal release point has moved almost a foot towards first base this year. With no changes to vertical release point, this suggests not a change in arm angle, but position on the rubber, which we can clearly see. 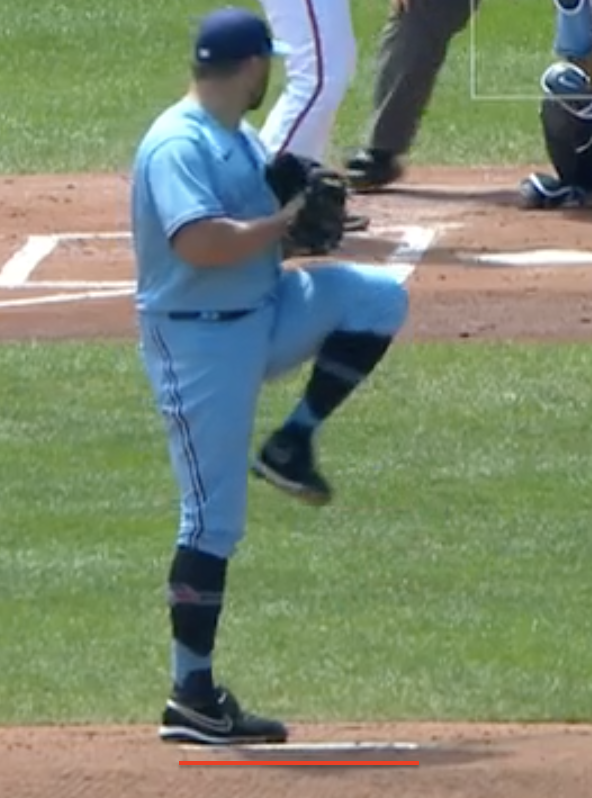 And in his last start on September 22nd against the Yankees, he moved even further towards first base. Half of his shoe is now beyond the edge of the rubber. 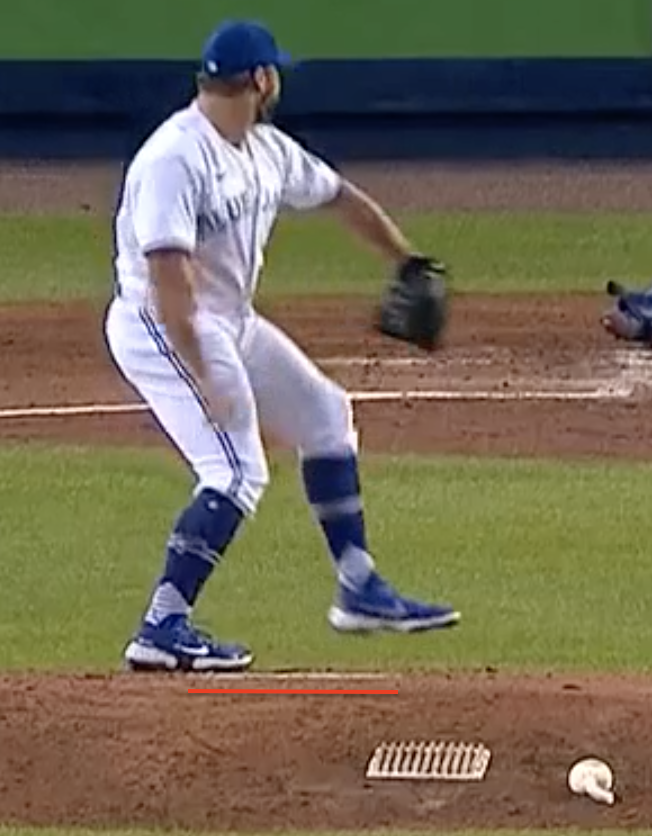 Leaning into this change even more suggests that the Jays don’t believe returning to the 2019 positioning is going to fix him. And that theory has some merit.

Pitchers who throw a sinker and changeup, two pitches with arm-side movement, can benefit from a change in angle. As a right-handed pitcher, moving more to the first base side of the rubber can cause those pitches to run inside more and jam same-handed batters. They can also create a better angle against lefties – diving away from the bat when thrown outside, or trying to front-door a pitch on the inside corner.

It’s possible this move was designed to improve platoon splits. Roark struggled against lefties in 2019, pitching to a 5.41 FIP and 5.49 xFIP, with more palatable 4.02/3.91 rates against same-handed hitters. That’s just a guess. And it’s completely backfired if that was indeed the reason.

His command of the sinker has been worse and it’s fair to question whether a move on the rubber has come with unintended consequences. Fewer are being thrown for strikes compared to last year and it’s gotten him trouble.

And when hitters have made contact, it’s been loud. Of the 96 pitchers who have thrown 150 or more sinkers/two-seam fastballs this year, Roark’s 7.5% line drive rate off the pitch is tied for 8th highest. A reason for this could be his diminished stuff.

The four-seamer is breaking arm-side 1.5 inches less but more concerning is his sinker. It’s lost an inch of drop and almost two inches of arm-side run. It’s basically not even a sinker as much as it’s just a terrible fastball now.

FanGraphs Pitch Type Values measure the effectiveness of a pitch based on the cumulative outcomes of each one thrown. It assigns Roark’s sinker a run value of -11.9 which is by far the worst in baseball.

Taking a step back, two simple statistics sum up his struggles, and both are career highs – his 10.5% walk rate and 44.5% fly ball rate. More base runners and more balls in the air is not a great combination, especially when those balls are hit hard. Line drives and fly balls are producing an average exit velocity of 93.2 mph, which is also Roark’s highest rate in the Statcast era (since 2015).

The quality of defenders behind him may also be a factor. Blue Jays outfielders have produced -20 Defensive Runs Saved in 2020, third worst among 30 teams. Roark’s .441 BABIP against line drives and fly balls is his highest in the Statcast era while league average this year is .391. While that discrepancy doesn’t explain Roark’s problems, it hasn’t helped his bottom line results.

Now, it’s not all bad for Roark. His breaking balls have actually been more effective this year. His curveball’s 42.2% whiff rate would be a career high, and his slider has a .299 wOBA instead of a .378 wOBA last year.

The logical move would be to throw more breaking stuff and fewer fastballs. That’s been the trend across baseball for a few years now, but eventually there are diminishing returns. Roark can’t just throw curveballs all day, he needs them to play off harder thrown pitches. At this point he could eliminate the sinker from his repertoire, rely on the four-seamer and hope for improved command of it. Or they might explore bringing back the cutter he briefly threw in 2018.

The Blue Jays would be wise to use Roark sparingly in the postseason should they advance past the Wild Card round. Another bad start on Sunday and it’s safe to question his place on a playoff roster altogether. But it would behove the Jays and Roark to find a new plan of attack during the offseason, otherwise that contract will look like one of the worst of the Shapiro/Atkins era.