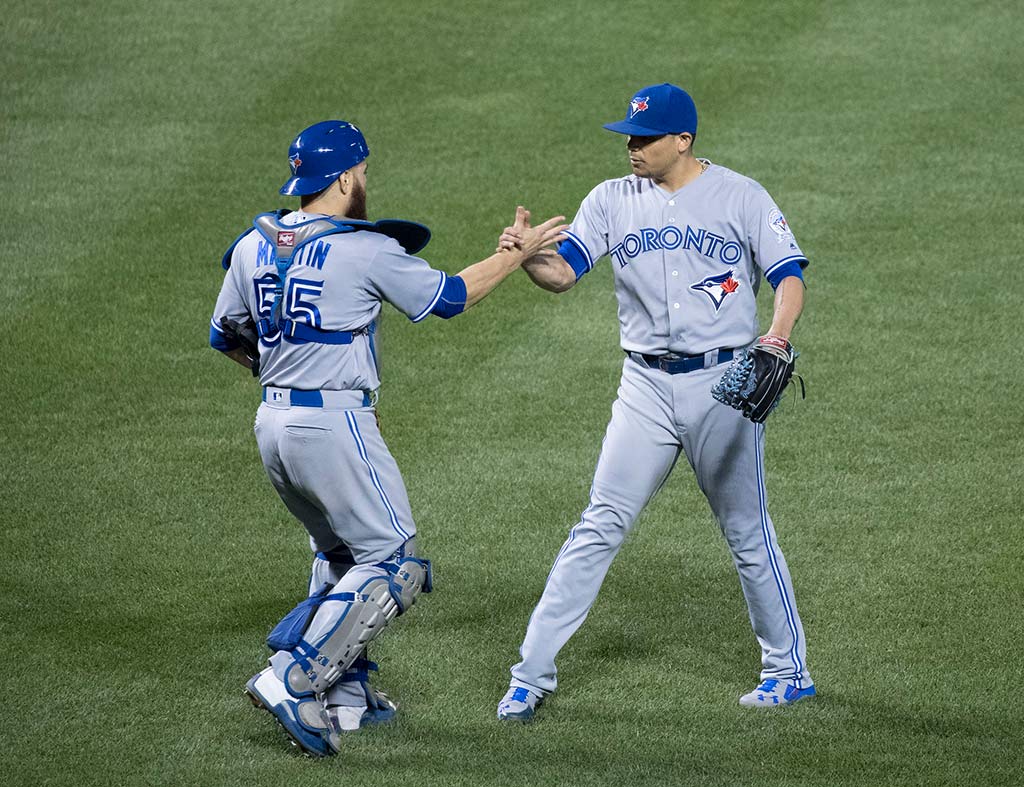 Previous parts of our Offseason Needs series are below

Heading into 2018 it would appear that the Blue Jays need some significant upgrades in the bullpen if they wish to contend. Their run prevention was mediocre and their 26 blown saves were tied for the most in baseball. Blowing a save is a pretty demoralizing way to lose, and fans were left with a lot of disappointing memories of the pen last season. But does our perception line up with reality?

The Jays were forced to use 25 different pitchers in relief and their 596.2 innings pitched led the American League. Clearly they were overworked and didn’t have the depth to slog through it. Despite this, some of the bullpen’s peripheral stats ranked in the top 1/3 of baseball:

The discrepancy between ERA and the other stats is notable. Strikeout and walk rates are usually more indicative of true talent than ERA is, and the bullpen performed very well in this regard. If we look at all 25 relievers this year, we see a few failed experiments that inflated the numbers.

So home runs were specifically a problem for a few relievers. The low point being Jason Grilli‘s June 3rd appearance when he faced 6 batters and gave up a whopping 4 home runs.

Jobs will be wide open in Spring Training, as closer Roberto Osuna is the only reliever locked into a specific role. Dominic Leone might be the top internal candidate as setup man given his 2.56 ERA and 10.4 K/9. However John Gibbons didn’t use him in many high leverage situations, opting for Joe Smith, Ryan Tepera and Joe Biagini to bridge late innings instead. Will a rising prospect like Ryan Borucki factor in? Will Biagini move back to the rotation or be in the mix to pitch late innings?

Answers to these questions will be clearer if the Jays can use free agency to help in three areas:

Swarzak had a 2.33 ERA, 2.74 FIP, 10.6 K/9 and often pitched in high leverage situations. What’s not to like? He ranks in the top 25 of qualified relievers in WHIP, K-BB%, FIP- and first pitch strike percentage. His 2.2 fWAR was 8th best of all relievers. And only 4 closers had a better WAR this year than Swarzak.

Swarzak’s velocity on both the fastball and slider ticked up this year and his swinging strike rate rose to an excellent 14%. He pitched like a closer this year yet is predicted to receive only a 2-year deal by MLBTR, with a 3rd a possibility. I think the Jays should be the team to offer that additional year, maybe in the form of an option if they can. This is a pitcher who showed a highly effective fastball-slider combo and was excellent at getting hitters to chase out of the zone.

The one big caveat is that he’s a 32 year old who’s played for 5 teams in 4 years and hadn’t notched a save in his career until 2017. But with big name pitchers like Greg Holland and Brandon Morrow appearing to be in line for big paydays, Swarzak offers similar production, a healthier track record, and a lower cost.

Jays fans are familiar with Hunter as a member of the Orioles bullpen, and most recently as a member of the Rays. Hunter is coming off his best season in relief with a 2.61 ERA, 3.07 FIP and 9.8 K/9. He averages 96.8 mph on his fastball. Like Swarzak, he won’t be the most sought-after reliever on the market but can probably be signed on a 2-year deal. 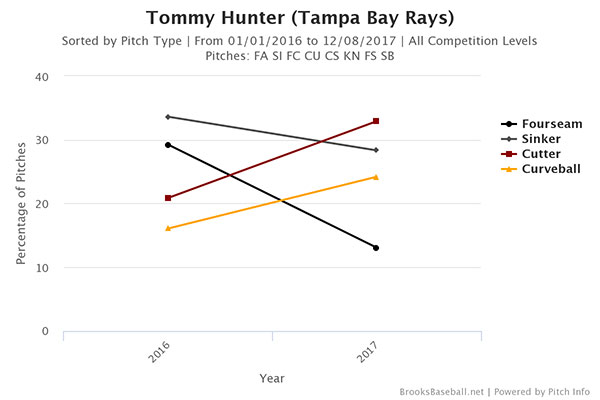 He replaced some two-seam and four-seam fastballs with the cutter, and incorporated more curveballs. The results followed.

Hunter racked up Holds in Tampa last season in front of Alex Colome and should prove useful in a similar role in 2018.

MLBTR projects Reed to earn the 3rd biggest contract for a free agent reliever behind Wade Davis and Greg Holland, at 4-years and $36 million. Under Mark Shapiro, the Blue Jays have avoided significant commitments to relief pitchers, opting instead to amass depth players on minor league deals or 1-year commitments to veterans. To date, the 1-year $3 million contracts to J.P. Howell and Joe Smith remain the most expensive reliever contracts handed out under Shapiro.

Signing Reed would be a massive departure from that. Philosophically, it’s not hard to see why a team should avoid big commitments to non-elite pitchers. Relievers are volatile both in performance and health, and struggling starters can often be converted to make a bigger impact in the bullpen (Joe Biagini for example).

Would Reed perform significantly better than Swarzak or Hunter? Probably. He has a 2.40 ERA over the past two seasons. But if his $36M estimate is more than double Swarzak’s and more than triple Hunter’s, it’s possible the Jays don’t see this as good enough value.

That said, there’s something to be said for having more of a “sure thing” pitch the 8th inning, especially when Osuna is pitching the 9th. Shortening games puts pressure on teams to knock in runs before the 7th inning rolls around. Reed has quietly been one of the better relievers in baseball over the past two years, with a 3.5 fWAR (8th) and a 1.00 WHIP (10th). Among the free agents this year, those marks rank 1st and 3rd respectively.

Reed isn’t even 30 yet and has a healthy track record. His velocity and swinging strike rates don’t indicate a decline is near. And if the concerns over Roberto Osuna’s fatigue last season develop into something more serious in 2018, the Jays will be glad to have Reed around to save games.

Potential Role: Setup-man/closer when Osuna needs a day off

Sure, there’s his age. His four-seam fastball averages just 91 mph. And he missed a month with shoulder inflammation last year. But the Blue Jays saw first hand how effective he was and a reunion would not be surprising. Smith frequently pitched in high leverage situations and John Gibbons would surely welcome back a dependable late inning veteran.

The downside? Well, the track record doesn’t support a return to elite peripherals in 2018 and he’s hit the DL in both of the past two seasons (hamstring & shoulder). Left-handed hitters gave him a bit of a problem (1.39 WHIP, 4.0 BB/9) so maybe he’s a pitcher you bring in late with righties due up. He’s also on the wrong side of 30. But it’s not hard to see 50 appearances from him with an ERA in the low-to-mid 3’s again.

The 33-year old lefty has been a strikeout machine for the better part of this decade. Among all lefties who have thrown 200 innings since 2012, Logan’s 11.3 K/9 is 3rd behind just Aroldis Chapman and Andrew Miller. Sure, he’s been sheltered mostly against left-handed hitters where those pitchers have not been. But the Blue Jays may want to insulate Aaron Loup with more of a sure thing than Tim Mayza against LHH. Boone Logan would be just that guy.

Logan’s velocity has never been higher and he got through 2017 without any shoulder or elbow issues. He did miss the last two months with a lat strain however, and does have a history of shoulder and elbow inflammation prior to this year. Teams might be scared off given his injury history and LOOGY status. But I would be willing to offer him a $5M contract for 2018 with a $1M buyout and $5M team option for 2019. If the Jays don’t drop huge money on a corner outfielder, the bullpen is where I’d focus a large part of it.

So Cahill isn’t entirely a reliever. He’s been a starting pitcher for most of his career but has found himself working out of the pen at times in the past four seasons. In 2017, he was fantastic over his first 10 starts – 11.2 K/9, 3.14 ERA, 3.24 FIP. Then the wheels came off. His next four starts were disasters. They would also be his last starts. And in the pen the woes continued to an 8.25 ERA and 12 walks in 12 innings.

So why is he listed here? There might be bounce-back potential on a cheap contract. And he can also make the odd start if need be. It might be in the Jays best interest to avoid using Joe Biagini in the long-relief role and let him focus on starting, either in Toronto or at AAA.

If we look to Brooks Baseball, Cahill’s problem might have been his breaking balls. Around the time he was traded from the Padres to the Royals, his slider and curveball stopped getting swings and misses. 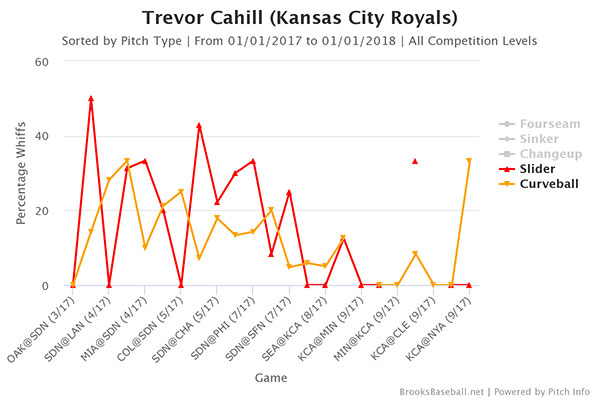 Batters apparently figured him out. But he did make 50 appearances for the Cubs in 2016 and pitched to a 2.74 ERA. His ground ball and swinging strike rates are virtually identical the past two seasons and projection systems put his ERA, FIP and xFIP all a hair under 4. With some adjustments I think Cahill could be, at worst, an inning eater. At best? A 5th starter.

Stay Away From These Guys

Relevant Statistic: 4.45 xFIP was 4th worst among the 41 relievers with more than 5 saves

He gained some notoriety when he started closing games for the Twins during their postseason push. He’ll turn 38 years old next season, has a career K/9 under 7.0 and his average four-seam fastball velocity was trending down in the season’s 2nd half. It finished at a career low 90.7 mph.

There is an element of consistently with Belisle though. He’s averaged 63 appearances over the past 8 seasons, and that type of workload is worth something. His 3.19 FIP over that time is also excellent. Some team out there will probably value that and pay for it. But the loss in velocity, rising walk and home run rates would give me pause on a pitcher his age. I would let another team more desperate for bullpen help sign Belisle in 2018.

He’s still just 32 but an extreme fly ball pitcher with high walk rates is not the type you want operating in the late innings against the other team’s best hitters. His fastball velocity is also moving in the wrong direction. 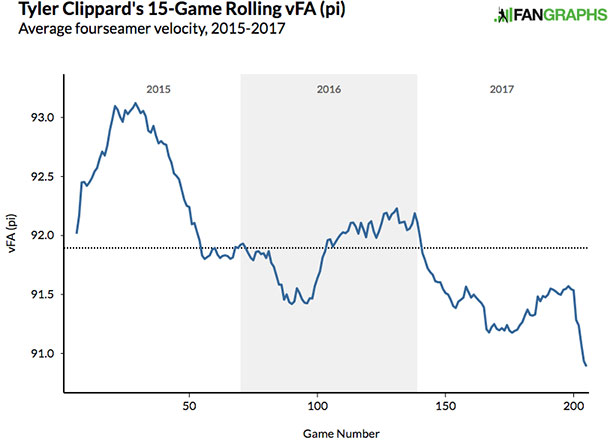 He still missed bats this year as his 10.7 K/9 and 14% swinging strike rate proves. His contact rate has not correlated along with his velocity so it’s possible he can avoid a total implosion averaging 91 mph. But it’s the type of contact he gives up that’s concerning. His home run-to-fly ball ratio spiked in 2016 to 12.7% and remained steady at 12.8% in 2017. That’s too high for a pitcher who gives up more than half his contact in the air.

Clippard has saves and holds in each of his last four seasons. It’s possible a non-contender will sign him hoping he rebounds and then flips him at the deadline for a prospect – it’s happened to him three years in a row now. But there are better options for the Jays than Clippard, even if he comes at a discount.