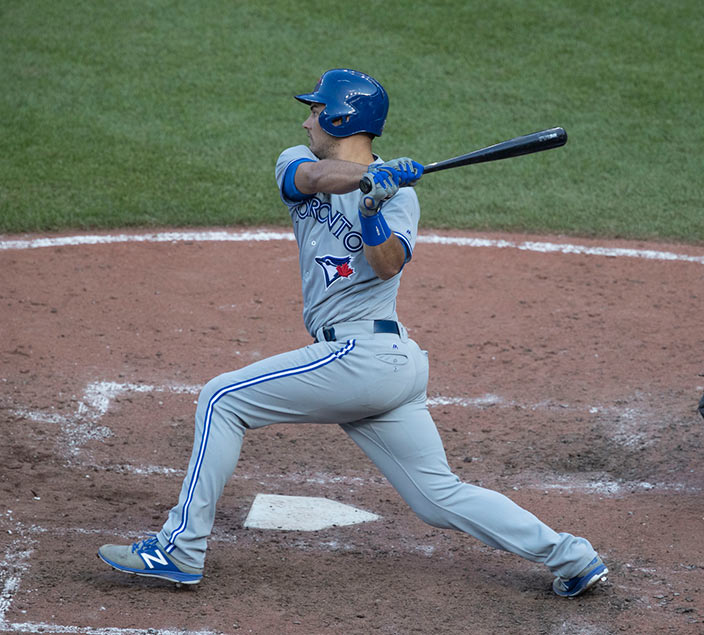 Sign a free agent. Call up Danny Jansen or Reese McGuire. Trade for a part-time catcher.

Heading into the 2018 season, it was not a foregone conclusion that Luke Maile was the best option to back up Russell Martin. Fans had their opinions about the light-hitting backstop, and the front office had theirs. As is usually the case, the front office appeared to be right.

Maile has not only proven capable of filling in when Martin needs a day off, he’s making an argument to take more playing time away from the veteran. In 37 plate appearances, Maile is slashing a robust .364/.432/.485 with a 155 wRC+. He’s been worth 0.5 fWAR in just 9 games.

His .522 BABIP is fuelling much of that and the good batted ball fortune will certainly dry up. Luke Maile isn’t a .300 hitter. He might not be a .250 hitter. What we’re seeing is not a star in the making and anyone who thinks that needs to pump the brakes. But so far he’s been able to take a walk at a much higher rate, and make better contact when he puts bat to ball. We don’t have a large enough sample to draw conclusions (he’s about 1/3 of the way there for walk rate and ground ball/fly ball rates) but that doesn’t mean we can’t look into the data and see what’s changed.

Last June I wrote about how Maile had been tweaking his stance and timing at the plate, ending with a hopeful look towards the future:

If he can work on making more solid contact without sacrificing the plate discipline gains, he might actually hit enough to play the part of a regular backup at the major league level.

And now it looks like something may have clicked for Maile between the end of last season and today. Let’s have a look at a few numbers.

While Maile’s average launch angle has barely budged (12.4 in 2017 vs. 12.0 in 2018) a broad statistic like that misses the underlying changes. For one, he hasn’t been drilling balls into the ground like he was last year. 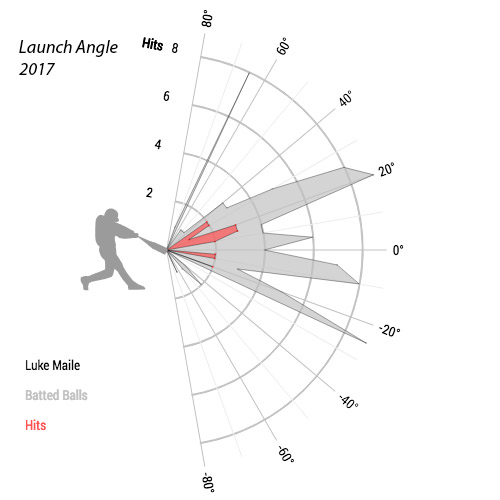 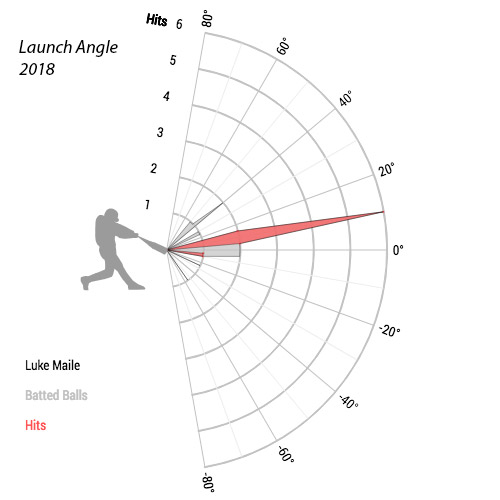 What the average doesn’t show is that the range of launch angles on balls in play has become far more condensed this year. With the help of Statcast’s Field Visualizer, we can see the probability of a hit at 94 mph exit velocity (Maile’s average this year) with a launch angle of 10 degrees. 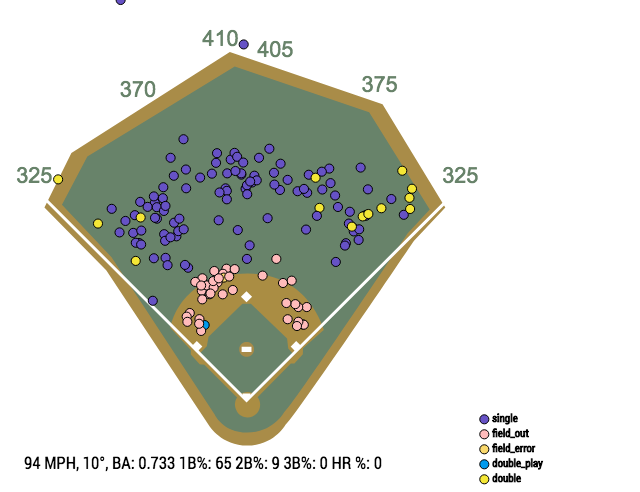 Yes, that’s a .733 batting average. Maile has apparently found the sweet spot for hitting singles. That might not sound impressive, but compared to where he was hitting the ball in 2017, it’s an improvement. 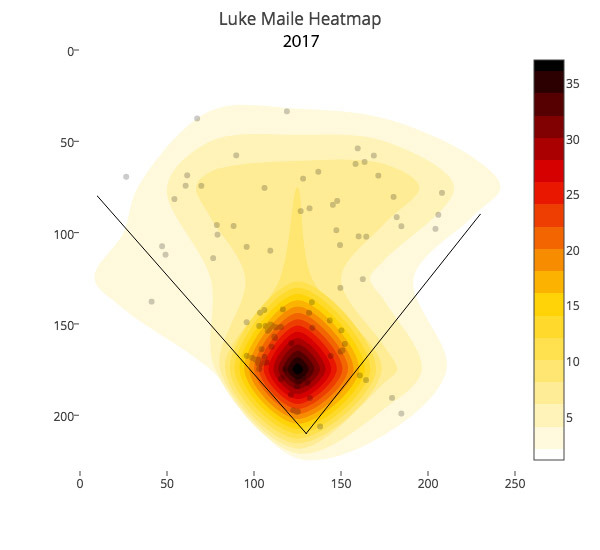 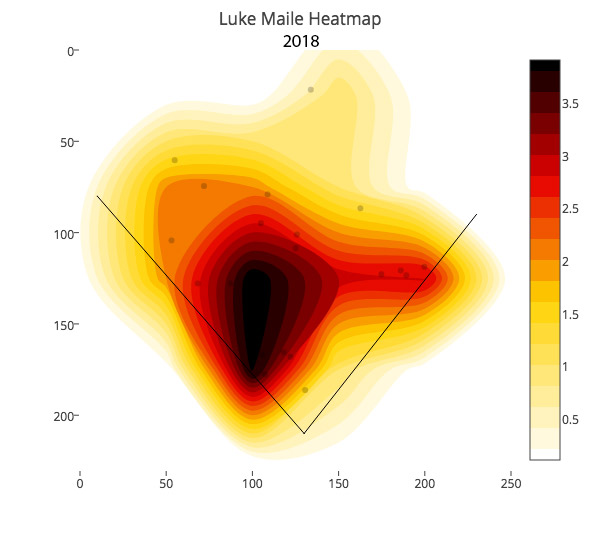 Along with the ball being hit farther, we also start to see more of a pull approach.

But he’s running a BABIP that’s impossible to sustain and still isn’t hitting for much power. How do we know this isn’t just random variation in a small sample size and that he’ll come crashing down to earth?

For one, it’s really hard to luck into such a high percentage of well struck balls, as noted in my previous article. Nine of his 23 balls in play this year have been hit 100+ mph, which matches his total from all of last season. Two, we have video evidence that he may have made an adjustment at the plate.

The first video is a single from September 2017.

The second is a single this year in the opening series against the Yankees.

To me, the second swing looks like it has more of an uppercut to it. The bath path looks different when the frame is frozen just after he’s made contact with the ball. He’s rolling the hands a bit more, they’re higher, and the backswing is at a more pronounced angle. 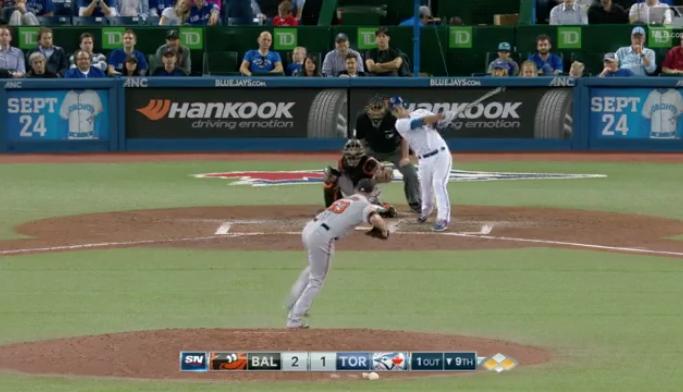 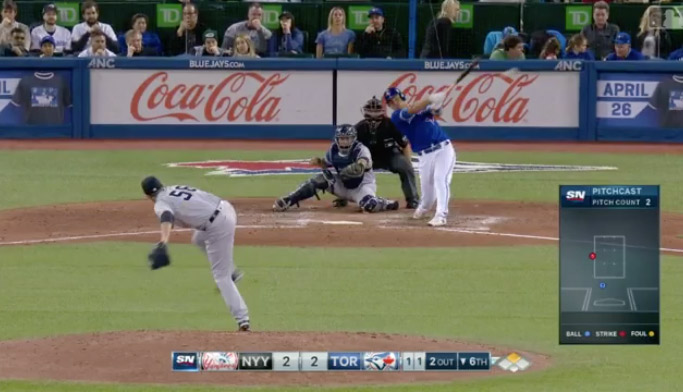 This would make sense, as generating loft has been the goal of many a hitter over the last few seasons. The fly ball revolution has taken hold, and Luke Maile may be the most recent entrant to the club. It’s weird to say that, because the reality is that he’s not hitting for power or actually generating many fly balls. But it’s a shift in that direction compared to how he was hitting last year.

Maile’s bath path may have been a significant flaw. The above launch angle chart from 2017 showed just how often he was getting on top of the ball. If he’s found a way to keep the bat along the plane of the pitch trajectory longer, he’s given himself a chance to make better contact.

According to Russell Carleton of Baseball Prospectus, reliability of exit velocity begins to take hold at about 40 balls in play. Maile’s more than halfway there, and has enough hard hit balls already in the bank that his average velo at 40 BIP will be significantly higher than it was last year. 94 mph is elite exit velocity. But if in another month his average drops to around 90 mph, that’s still in the upper echelon of hitters. Last season, only 34 of 466 hitters recorded an average exit velocity of 90+ mph with a minimum of 50 balls in play. It’ll be interesting to see where he eventually settles in.

As a final exercise, just for fun, I decided to look at average exit velocity changes among all players from 2017 to 2018. There were 320 hitters who put 20 balls in play in 2017 and another 20 in 2018. And sure enough, Luke Maile’s increase of 10.8 mph leads them all. I don’t know what that means exactly, but it’s something notable at least.

The question is not whether Luke Maile can avoid regression. That’s inevitable. But what he’s done in the early going is set a bar high enough that even when he does come back to earth, he’s probably going to be a much better hitter than he has been in the past. And given Russell Martin’s age and early struggles, it’s something the Jays could really use.