“I’ve just got to be better,” says Marcus Stroman. An obvious statement after another ugly outing for the Jays’ right-hander. While honest and direct, it is a comment bereft of insight into the underlying reasons. So let’s try to fill in the blanks and figure out why Stroman’s first month has been such a mess.

When doing pitcher analysis there are a few things I look at first. Year-to-year changes in velocity, spin rate, pitch movement or release point can often be the result of health or mechanical issues. Stroman is predominantly a sinker-slider pitcher so let’s look at those two pitches.

According to Pitch Info, the velocity on his sinker is down from an average of 93.2 mph last season to 92.0 this year. The pitch itself is actually performing better this year, with a .345 wOBA against compared to a .360 wOBA against in 2017. His swinging strike rate on the sinker is also up a hair, from 5.4% to 6.1%. So far, the overall results of that pitch haven’t been that bad.

It’s possible that Stroman’s shoulder inflammation during Spring Training set him back a bit and the velocity will creep up as the season goes on.

His vertical release point has changed since last year.

He’s dropping down lower for the four-seamer and changeup but raising his release point for his other pitches. Generally, I like a trend towards a tighter cluster, but Stroman’s already admitted that his release point has been an issue this year. Given that he often tinkers with his wind-up and timing, I’m not going to take too much from this data in the early going.

What’s most important to me is that his release point differential on sinkers and sliders remains the same. Stroman sequences sinker-slider and slider-sinker more than any other two pitches according to Baseball Prospectus’ tunnelling data. If the release points of those are too far apart, he might start tipping his pitches.

Let’s take a deeper look at his slider. 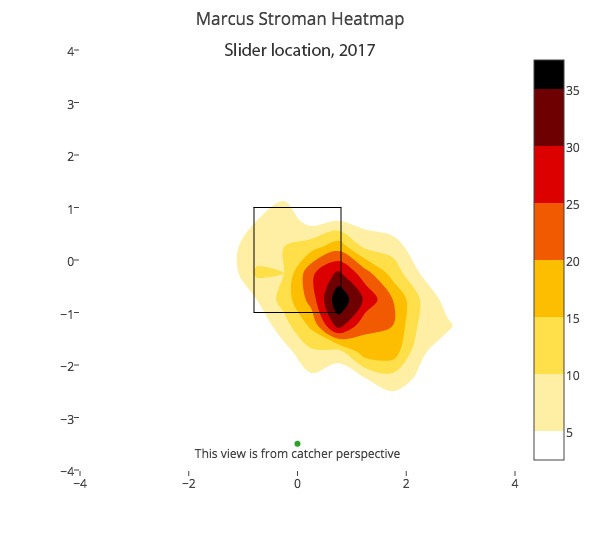 Last season he was locating the slider more precisely – down and away to righties and down and in to lefties. This year it’s been leaking all over the zone and hitters have taken advantage.

Considering the slider is Stroman’s second-most used pitch, it’s obvious why he’s had issues preventing runs. A .500 BABIP on the slider isn’t going to stay that high, however. So let’s chalk up some of the high wOBA to just being unlucky once the ball is in play.

But the walk rate has exploded and looks like a real issue. The heatmaps above suggest that location is a root cause, but pitch selection might also be to blame.

Is it because he has less confidence in the slower two-seam fastball? I’m not sure. But this seems like a conscious effort on his part to attack hitters differently when behind in the count.

And this could be a problem because the slider is a pitch Stroman isn’t locating very well.  Look at that 2018 heatmap again. He’s all over the place. And league-wide this season, batters have swung at 3-0 and 3-1 pitches only 38% of the time (1699 swings at 4470 total pitches). If Stroman doesn’t prove he can command pitches in those counts, hitters will lay off and take their free passes.

He also needs to avoid those counts in the first place. His 55.7% first pitch strike percentage this year is a career low. And this is probably where lack of fastball command is hurting him.

On the first pitch of at bats, he throws his sinking fastball 71% of the time to lefties and 64% of the time to righties. Here are his heatmaps on 1st pitch sinkers from 2017 and 2018. 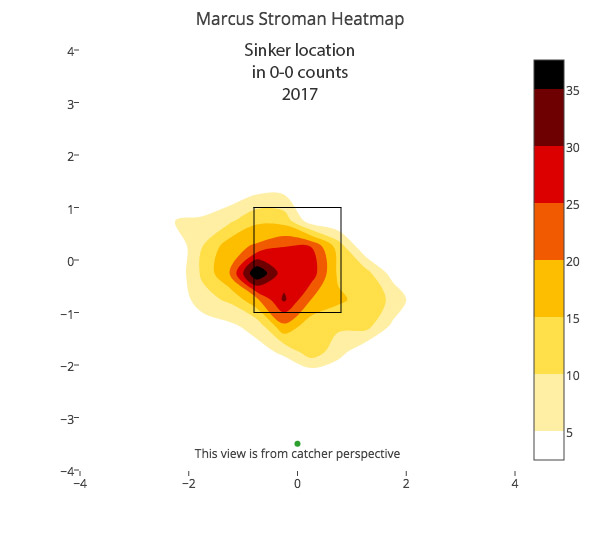 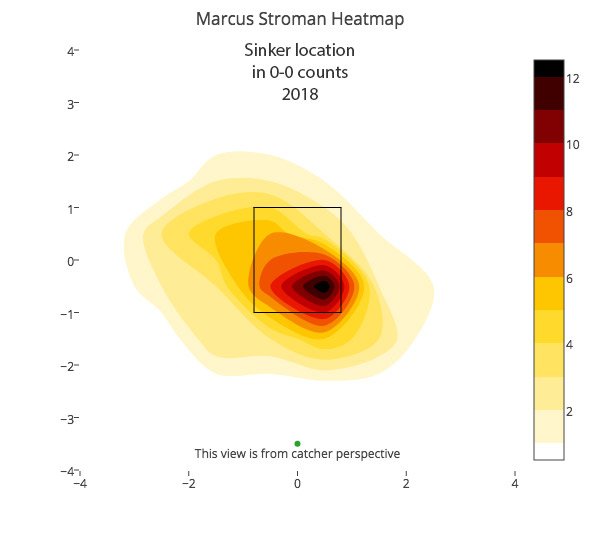 Two things stand out here. First, the spread of his first pitch sinkers this year is much larger than it was last year. When he’s missing his spots, he’s often missing badly. Second, the target location is completely different. Remember that Stroman’s sinker dives down and towards his arm side quite a bit. So while he was burrowing the sinker in on the hands of right handers to start at bats last year, he’s letting the ball sneak back over the plate in a location where hitters can do more with it.

That’s some pretty incredible luck that Stroman hasn’t been hurt more on the first pitch of at bats.

This all comes down to a fairly simple recipe for success to me. Stroman’s effectiveness as a pitcher is largely due to the sinker generating ground balls and the slider getting swings and misses. He’s getting those ground balls but the slider isn’t doing its job. He also has to locate the fastball better, and the slider will play off that. So far he’s had some good luck in 0-0 counts, but that won’t last if he doesn’t make some adjustments.

Stroman’s track record speaks for itself, and unless he’s trying to pitch through arm discomfort I feel confident he’ll turn things around. The Jays need a starting pitcher other than J.A. Happ to step up and dominate, and Stroman’s fully capable of being that guy. Here’s hoping tomorrow afternoon’s start against the Twins will be the beginning of his turnaround.

Update: Wednesday May 2nd:
The Jays didn’t get the win today but they have to be encouraged by what they saw from Stroman. He got into trouble early with some familiar command problems but finished strong. His line of 7 IP, 2 ER, 1 BB and 5 K was solid.

In fact, he faced just four 3-ball counts all game and did not throw a slider in those situations. He relied on the slider far less than he had through his first five starts, going to it only 22 times in 99 pitches.

Interestingly, it was the four-seam fastball that he went to most often, throwing 35 of them compared to 29 two-seamers. The 6th inning at bat against Logan Morrison stood out as unique to me. It was a 3-pitch strikeout from a four-seamer and two sliders. The small separation in velocity between 4-seamer and slider, along with an identical release point, was highly effective: 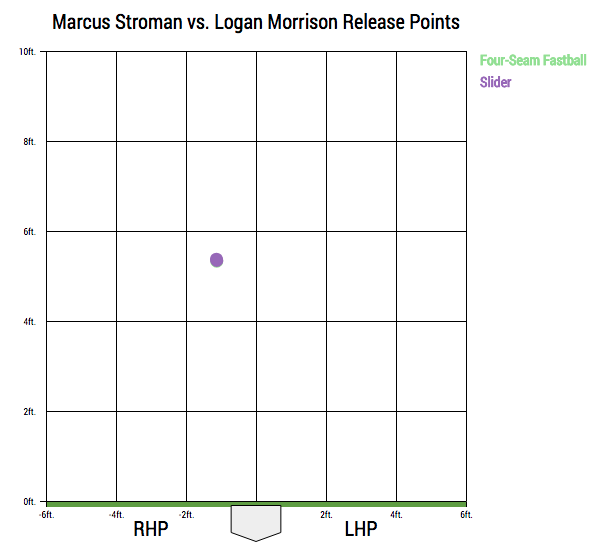 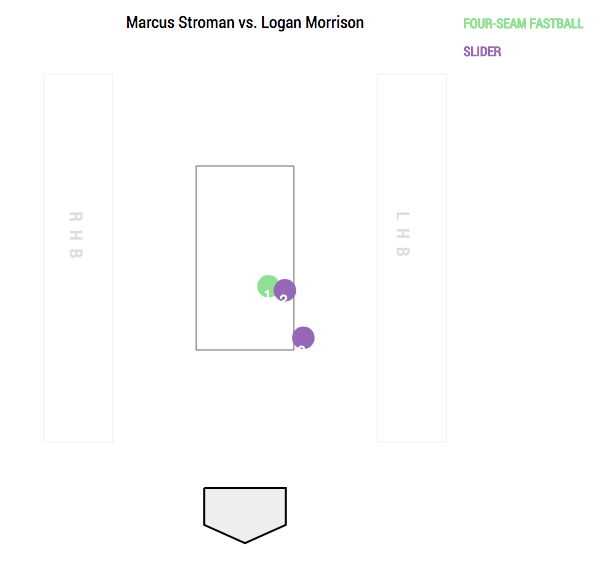 Stroman threw 22 pitches in his final two innings and only one was a sinker. This is quite a departure, as going into today he’d thrown the sinker 53% of the time and the 4-seamer just 9%. I’d say this adjustment paid off. It’ll be interesting to see how closely he sticks to this new plan in his next start, or if he tries to reintroduce the sinker.