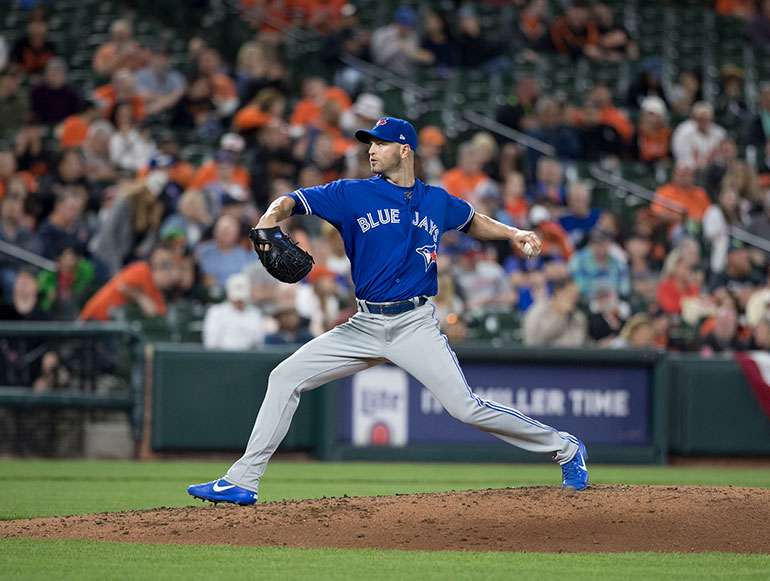 I’ve chosen this completely arbitrary timeframe to take a look back at the Jays’ young season. Perhaps part of the impetus is because #TheBlueJaysAreActuallyGood and last April they were most decidedly not. So let’s have some fun with small sample sizes.

I’m not sure Jays fans, or baseball fans in general, appreciate Happ enough. He checks off all the boxes a team would want from a #3/4 starter. In fact, he could even pass as a #2 starter given some of his statistics.

Since the beginning of 2015, Happ’s 9.4 fWAR ranks 24th among 115 qualified starting pitchers. His 91 starts ties him with five other pitchers for 22nd most. And his 3.45 ERA ranks 23rd, ahead of some pitchers who have, at times, flirted with “Ace” status: Masahiro Tanaka, James Paxton, Marcus Stroman, Sonny Gray and Chris Archer.

In those 91 starts, Happ’s allowed more than four earned runs just 10 times. He rarely gets blown out, thus fulfilling the old adage of giving his team a chance to win every fifth day.

While he’s been burned by the home run early this season, his 3.94 ERA is still decent. And his home run rate-adjusted 2.53 xFIP portends some positive ERA regression in the future.

Happ’s swinging strike rate through his first three starts is up to 15%. He’s never had a 3 game stretch in his career above 13.6%, until now. While he hasn’t been super economical with his pitch counts, he’s missing more bats and still touching 95-96 mph. He’s doing just about everything you could ask of a 35-year old pitcher.

Perhaps the most remarkable feat is that he’s doing all this mostly off the fastball. His 70.3% fastball percentage since 2015 is 4th most among qualified starters.

But enough stats. We all just want to see this classic reaction to a strikeout against Happ.

Luke Maile is pretending to be a slugger

Through the first two weeks, Maile’s average exit velocity on batted balls was 96.9 mph, which is good enough to lead the team. Yes, you heard that right. I linked that previous sentence to the Baseball Savant website so you can see for yourself because, frankly, that sounded made up.

Now, we’re talking about a sample size of 12 balls in play here. Not exactly much to go on. But six of those 12 have been hit at 103 mph or harder, and light hitters rarely luck into hard hit balls at that high a rate.

Obviously we expect this to come down as Maile accumulates more plate appearances. His track record has never included power and he’s made his money by being a good defensive catcher and game caller. But it’s possible Maile started making some adjustments that have carried over this season. Observe his rolling 15-game average for ground ball rate. 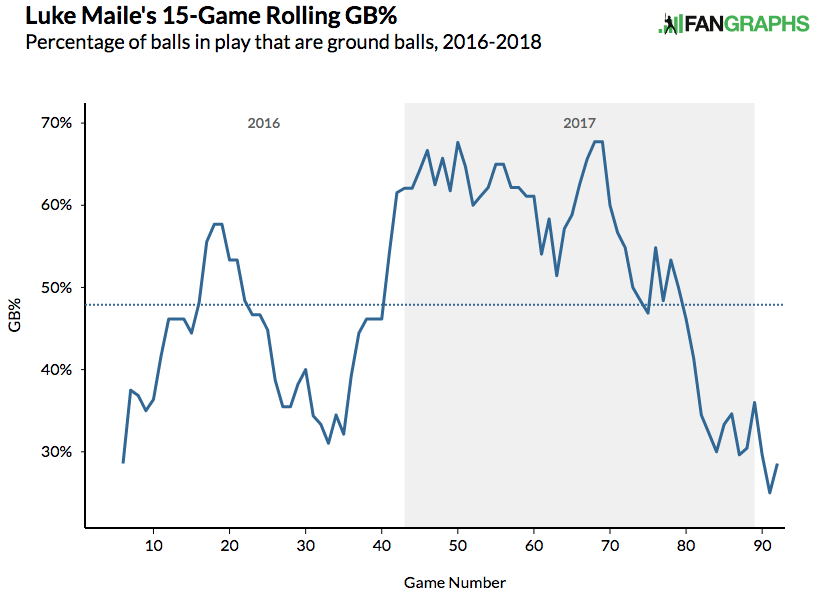 Fewer balls on the ground for Maile is a good thing. Is this a conscious adjustment, and if so, will it last? Who knows. But hitters across baseball have been trying to hit more fly balls lately. Maybe Maile is just late to the party.

I’ll repeat the disclaimer: It’s early. Extremely early. But I’ll also repeat the part about luck. Awful hitters rarely luck into balls hit 109 mph, which Maile has done twice in his first 17 plate appearances. If you want the full list of the 254 players this year who have hit balls 109 mph and harder, here it is. There are a few light hitters who show up on the list. Austin Romine, Rene Rivera, Jordy Mercer, Kevin Plawecki. They’ve achieved that feat only once. Maile’s done it twice.

Furthermore, of hitters with 10 or more balls in play this year, Maile’s exit velocity ranks 3rd among 330 hitters. Let’s wait to get a larger sample. But if nothing else, this is a fun statistical anomaly.

The Jays saw enough defensive value in Maile to hand the starting job to him this Spring, despite him hitting a hilariously low 0 wRC+ to go along with a -0.6 fWAR in 2017. They clearly saw upside. And even if this is an early mirage that dissipates into a replacement level player, he’s just warming the backup seat to Russell Martin until Danny Jansen‘s ready anyway.

Osuna became the youngest pitcher to notch 100 saves, at 23 years and 62 days old. That’s an impressive feat. I’ll have another article coming up soon on Osuna, in terms of where he ranks among other relief pitchers 24 and under all-time. Spoiler alert: he’s one of the best.

Last year, Ryan Goins and Darwin Barney were worth about negative 1 WAR. Aledmys Diaz and Yangervis Solarte have already provided 0.6 WAR. Quite the swing in production. Solarte won’t keep hitting 181 rWC+ but he’s been a capable defender at multiple positions and has even seen some time as the cleanup hitter. The Jays backup infielders don’t suck, and that’s a welcomed sight.

Another strength early in the year as been the bullpen. Its 2.61 ERA is 3rd best in the AL, in part due to offseason pickups John Axford, Seung-hwan Oh and Tyler Clippard. Axford’s average fastball velocity of 95.6 mph leads the ‘pen and Clippard’s 18.3% swinging strike rate is tops for the group too.

Consider what Ross Atkins parted with to acquire each of these gentlemen:

It hasn’t all been rosy for the Jays. The first two losses against the Yankees to begin the year were underwhelming to say the least. The five members of the rotation all have FIPs of 4.52 or higher, due in large part to the 11 home runs they’ve allowed (tied for most in MLB). Fielding has been an issue at times, as the team’s 9 errors are second most in the AL. And Josh Donaldson‘s deceased arm is a matter of concern for everyone.

All in all, fans will take the 8-5 record. Next up are the Indians, a series which should prove to be one of their toughest tests yet.