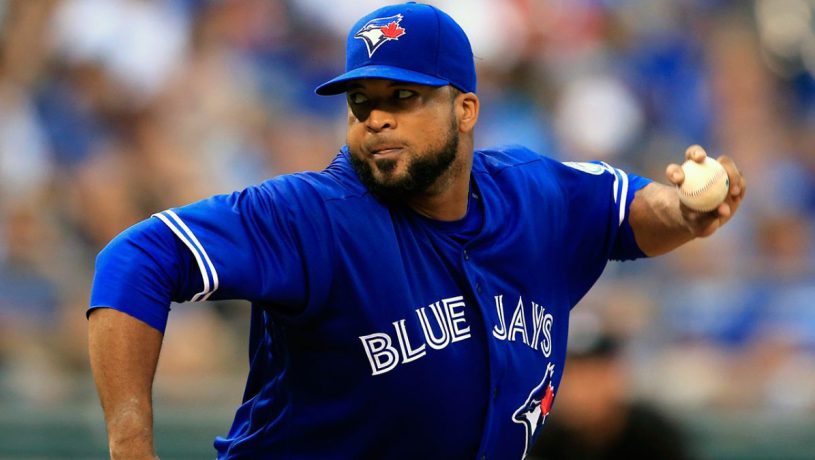 With the trade deadline approaching, we look at some of the recent rumblings involving potential Blue Jays trades.

Bob Nightengale tweets that the Royals are “in talks” for Francisco Liriano.

This season he has been awful by any metric. His 5.99 ERA is worst on the team’s staff and skill-based metrics like SIERA (5.08) and xFIP- (116) also peg his work as being well below average.

Situational matchups become all the more magnified in a Wild Card game or short playoff series, so the Royals may be looking to improve against left-handed hitters. Their bullpen’s 4.82 xFIP again LHH ranks 21st in the majors and would appear to be an area of need.

It’s also possible they see Liriano in a middle relief role capable of eating two or three innings and saving the bullpen. While his results (a 5.56 ERA) haven’t been great the first time through the order, his .330 BABIP and 12.5% K-BB% ratio suggests there might be some upside.

The Jays would no doubt need to eat a significant portion of his salary (he has about $4.7M remaining on the full $13.666M amount) and shouldn’t expect much in return. But if Cesar Valdez‘s start last night was any indication, the Jays may have found a rotation replacement, making Liriano expendable.

Ken Rosenthal reports that the Blue Jays are on Yu Darvish’s no-trade list.

This one was unlikely to happen anyway. Even if the Jays win every game left leading up to the deadline, it’s unlikely the front office will justify parting with prospects for a rental. And it’s not surprising to see a pitcher list Toronto on their no-trade list. The Dome has the reputation as a hitter’s park and the AL East as a hitter’s division.

The Brewers apparently had interest in Smith dating back to the offseason, reports Ken Rosenthal, and may be interested in adding him to their bullpen now. The 33-year old right hander came of the DL Saturday and has pitched 2 innings of 1 run ball, striking out 3 and walking 0.

Shoulder injuries, even minor ones, can be worrisome but Smith has shown good velocity and command upon returning and comes with high strikeout upside. His 13.4 K/9 is the highest on the team and is 8th best in baseball among 163 qualified relievers. His 2.09 xFIP ranks 3rd and 2.15 SIERA ranks 5th. He is squarely among the elite relief pitchers this season even though he doesn’t possess a blazing fastball. His 4-seamer’s average velocity of 89.4 mph ranks 150th in 163 qualified relief pitchers. Dave Cameron wrote him up last week as an under-the-radar upgrade.

Smith will be a free agent at the end of the season and the Jays have other options who can pick up the slack out of the pen if he’s moved.

Marco Estrada starts what could be his final game as a Blue Jay tonight.

Scouts will be watching closely tonight as Estrada takes the mound against the A’s. Despite his June and July struggles, he has a track record of being one of the better run preventers in baseball since 2015.

But that 9.52 ERA since June 1st looms large and cannot just be dismissed as a tiny sample size anymore. We looked at his work in depth and the command issues are real. Despite this, a strong start tonight might go a long way in convincing other teams he can right the ship.

The Royals, Brewers and Astros may have interest, with the Dodgers, Diamondbacks and Nationals being potential options as well. There will be teams that won’t pay the price for a front-line starter like Yu Darvish or Sonny Gray and may see Estrada as a good buy-low candidate.

The Non-Waiver Trade Deadline is Monday, July 31, 2017 at 4 p.m. EST. Although it’s worth keeping in mind that teams may still make trades in August if the player clears waivers. And someone like Francisco Liriano or Jose Bautista might just do that given their large financial commitments.