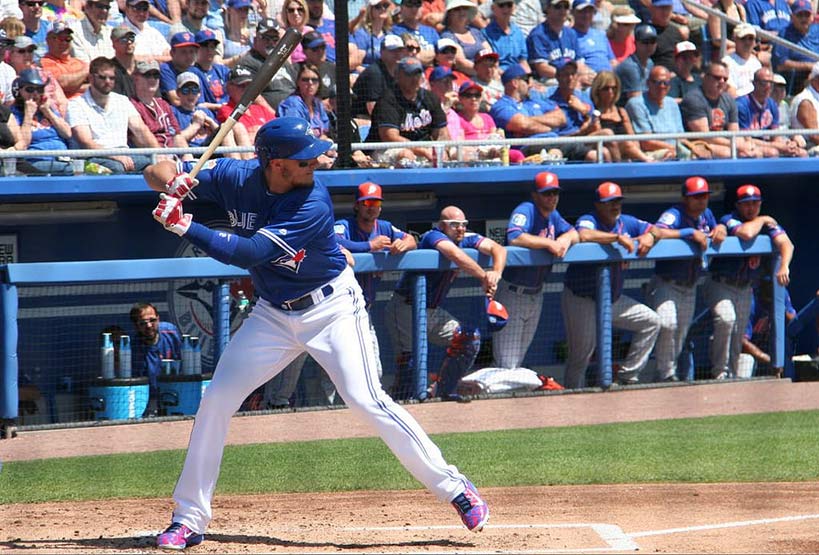 When Alex Anthopoulos traded for Troy Tulowitzki at the 2015 trade deadline, it stunned the baseball world. His contract was enormous (he was being paid $20 million in 2015 and was guaranteed another $98 million over the next five years) but he wasn’t that far removed from being thought of as the best shortstop in baseball. He had just made the All Star Game that summer (his fifth in six years), had two Gold Gloves to his name, two Silver Slugger awards and had garnered some MVP votes along the way. But that version of Tulo as we knew it was gone.

He was hitting a healthy .300/.348/.471 at the time of the trade but his .818 OPS was a far cry from the .940 OPS he put up across the previous five seasons. It’s convenient to say that losing Coors Field as his home park was the reason for his decline at the plate but in reality it was happening while he was still in Colorado. And to me, one injury in particular stands out around this time.

On July 19th, 2014, Tulo would exit the game after pulling up running to first base. He grabbed his left quad and hip area in obvious discomfort. That would be the final game he’d play that year and a few days later he would undergo hip surgery. It was a shame, because he was putting up an MVP-caliber season.

Any player who produces at such a high level is probably feeling good physically. But then came the surgery and his production took a nose dive in 2015. 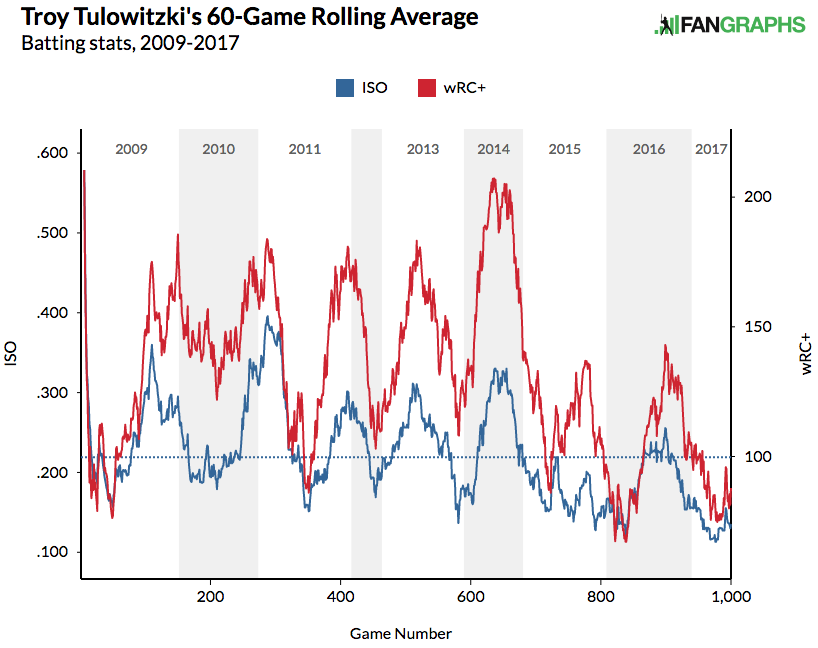 The isolated power (the blue line) had been well above average until 2015. And sure, that’s the year his home park was the Rogers Centre and not Coors Field. But this is why I’ve included wRC+ in the graph – an offensive metric that accounts for ballpark factors and league run environments. Even with the move in home parks taken into consideration his production was nowhere near the same, power or otherwise.

Having surgery to repair a torn labrum (joint cartilage) in the hip is serious, and it was not the first time Tulowitzki injured that area of his body. He may be just 32-years old today but he has the body of a player much older than that. The hope when he had the surgery was that it would also help clear up nagging problems he had in the past. It doesn’t appear as if it had the desired effect.

A healthy left labrum is pretty important to a right handed hitter as it’s his front side. If we go back the year previously, Pro Speed Baseball did a breakdown of his mechanics that they suggested led to the season-ending injury.

The takeaway here is that he was rolling over his front foot instead of firmly planting it. As such, the hip joint was taking far more of the weight transfer than it should have.

If we recall, Tulo changed his swing in the 2016 offseason to incorporate a bigger leg kick. BlueJayHunter.com had a great writeup about it. The goal was to improve his timing and regain some of the power that had been missing. The only problem is that his new method still included that exaggerated roll of the front foot:

That roll-over persisted late into the 2016 season. Here’s video of him hitting a 2-run home run in Game 2 of the ALDS.

Let’s freeze it at the point he rolls over his front foot:

And compare this with a freeze frame from Pro Speed Baseball’s breakdown of his swing in the year he injured the labrum: 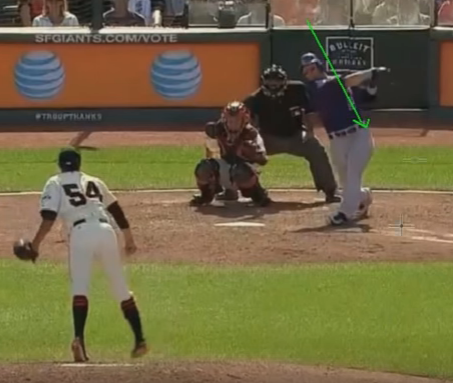 And now with a shot of him on July 8th this season, hitting a home run:

They’re all virtually identical. He’s doing the same thing that’s putting unnecessary pressure on his surgically repaired hip. And he’s already missed time on two separate occasions this season because of a hamstring issue and more recently a groin. Something has to change. Forget living up to the rest of the money on his contract – it’s an albatross at this point – but if nothing else he needs to find a way to stay on the field.

Reinventing oneself at this stage of a career isn’t going to be easy but it might be essential to Troy Tulowitzki remaining an everyday player through the rest of his contract (which will end after 2020).

Option One? Change his swing mechanics.

If he’s selling out for power by rolling his foot open in the follow-through of his swing, maybe it’s time to stop that (I make it sound easy. I know). But it’s not like it’s leading to any power anyway. His production this year is almost identical to the St. Louis Cardinals’ shortstop Aledmys Diaz who was demoted to the minors in late June because he was hitting so poorly.

I’m not suggesting the Blue Jays demote Troy Tulowitzki – the situations are different – but something has to change because this is not good enough production from a team’s starting shortstop.

Option Two? Move him to second base and have him DH occasionally.

This one’s probably just as difficult to execute simply due to the roster construction. The Blue Jays don’t have a shortstop in the organization capable of replacing Tulo at the moment (Goins/Barney are not everyday players and Lourdes Gourriel still needs seasoning). They also have a full-time DH incapable of playing any other position (except first base perhaps, but that’s occupied by a certain All Star slugger). And eventually Devon Travis will be back from injury, so where do you play him?

Eventually the time will come when Tulowitzki will have to move to a less demanding role in the field. Maybe that time is already here.

His defensive metrics have been solid as recently as 2016 – a 10 DRS and 5.4 UZR/150 – but if the wear and tear on his body at short is causing him to miss games and be less productive at the plate, it doesn’t matter. Second base and the occasional DH start would presumably help him stay fresher and keep him off the sidelines.

The Jays will have to get creative to make this a reality, and it’s possible they don’t think it’s worth the effort. If you have to dump Kendrys Morales‘ contract to free up the DH spot and/or move Travis to left field to accommodate Tulo at second, it starts to seem like less of a good idea.

A ton of players have changed their bat paths and other elements of their swing in order to hit more balls in the air. It’s probably part of the reason we’re seeing such a surge in home runs these days. I won’t try to suggest that Tulo mimmic a specific player as much as I just want to see him put fewer balls on the ground. Because it’s become a pretty big problem lately. 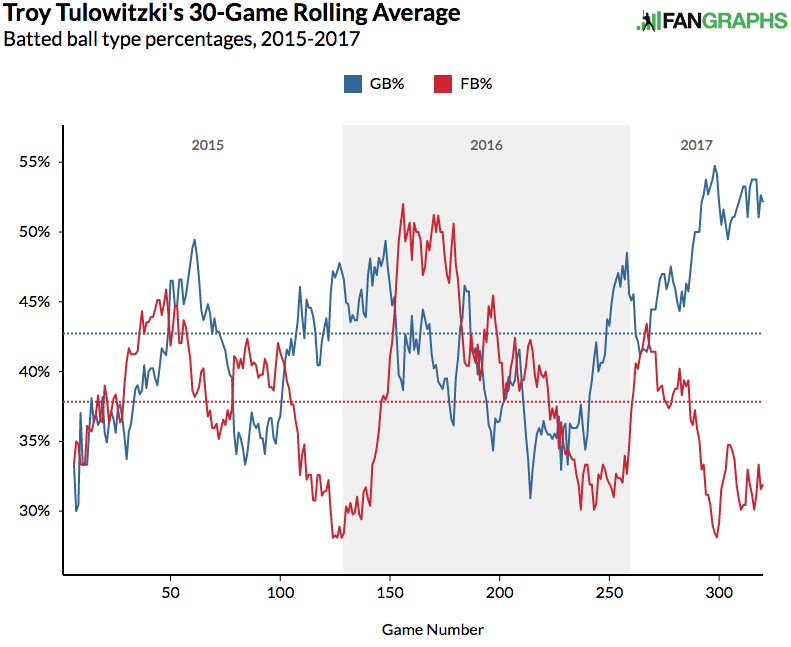 The separation this season between ground balls and fly balls has been awful. Tulowitzki leads all Blue Jays regulars with a 50.8% ground ball rate and he ranks 37th in the majors among the 265 players with over 200 plate appearances. Ground balls across baseball have gone for hits at an average of just .241 this year. If Troy could turn a few of those grounders into balls in the air, his production should climb.

Expecting the 30 home run version of Troy Tulowitzki again is unrealistic. Once an excellent fastball hitter, he’s struggled in the past three seasons to catch up to them. A shorter swing with more of an emphasis on contact could help him do damage again to fastballs. Because the way it’s going right now doesn’t seem sustainable.

It might not be an issue now but eventually the Jays will look for more production at the position if they can’t get it out of Tulo.