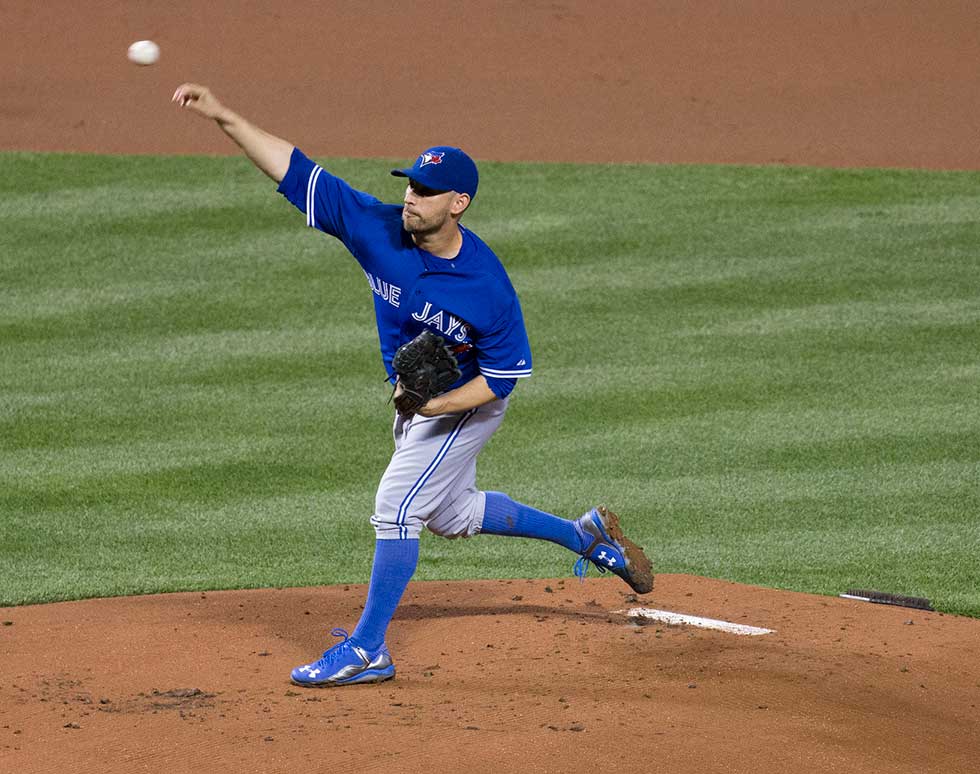 In Sunday’s game against the Tigers, Marco Estrada gave up four runs and four walks in just 3 2/3 innings. It was an unfortunate continuation of the struggles plaguing him for the last month and a half.

It’s been an awful stretch of run prevention, no doubt about it. But he’s probably been a bit unlucky as well. That .400 BABIP is sure to come down – in fact, since he became a regular starter with the Brewers in 2012, he’s never had an 8-game stretch with a BABIP this high: 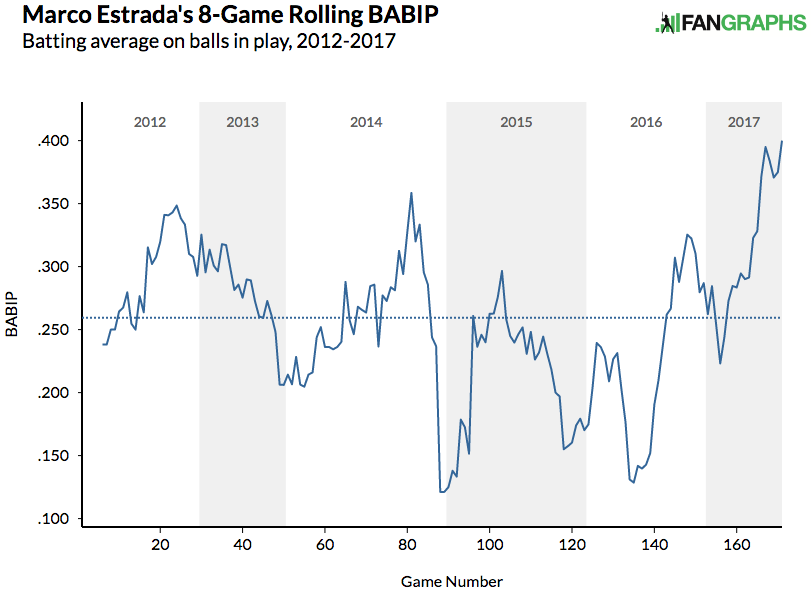 Now, those historic lows in 2015 and 2016 were never going to last either. But Estrada has the pitch repertoire and batted ball profile to generate a better-than-average BABIP (which is part of the reason why his ERA has outperformed his FIP in the past). I don’t expect hitters to be this lucky off him for much longer. Especially if there’s something physical he is trying to correct. Pete Walker recently suggested there might be:

“There was a mechanical issue that he’s worked on,” Walker said.

That’s a pretty vague comment but it does suggest there’s been some kind of change in Estrada’s pitching motion. Nuances in delivery can be hard to spot unless you’re watching a lot of video or see this player day-in and day-out in person. Walker declined to elaborate, but let’s see if we can find clues in the data and zone profiles.

Command appears to be an obvious issue, as his walk rate has spiked: 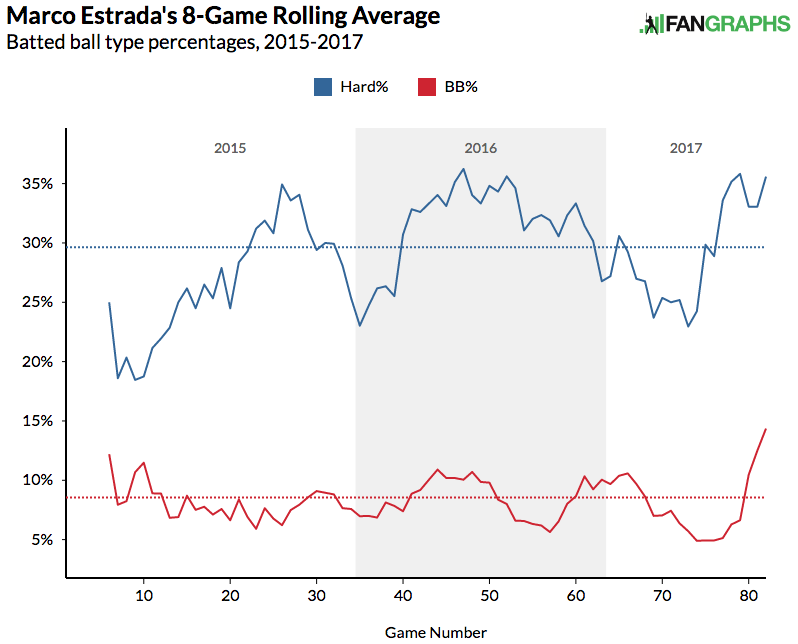 When a pitcher’s walking a ton of batters it’s not surprising to see him also get hit hard, which is what’s happening. Estrada’s Hard Contact rate has almost matched a three year high. It’s not on that graph, but his Line Drive rate has surpassed his previous high. Hitters are barrelling him up.

When Estrada’s on, his zone profile is tight. The first graphic is a heatmap from his first 11 starts: 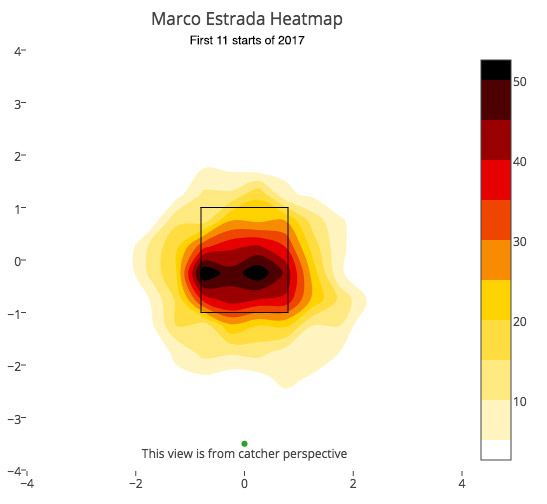 In his next 8 starts, his zone profile is no longer neat and tidy. We see pitches leaking out all over the place: 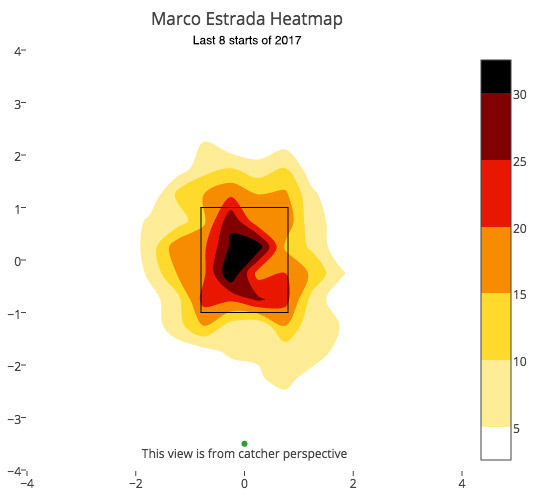 There doesn’t appear to be anything wrong with his “stuff” that might lead to missed location. I’ll spare you the graphs, but there haven’t been any significant deviations in spin rate, movement (both vertical and horizontal) or velocity with his 4-seam fastball or changeup.

One thing that has changed, however, is his horizontal release point on both pitches. 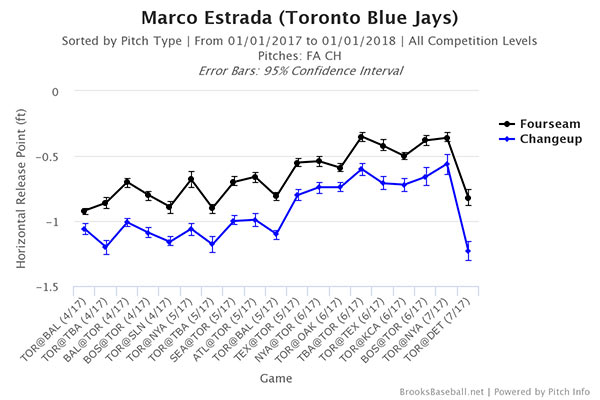 His release point had been within a pretty small range from the first game of the season to Texas on May 27th. But once it changed, it kept creeping farther away from the norm. Could this be what Pete Walker was referring to?

There’s also the notion that he might be tipping his pitches. Although I’m not sure that would be due to his release point changing since all of his pitches have deviated together at about the same rate.

Estrada admitted after the Yankees and Athletics games that he was all over the place. He knows he’s had bad command. And during this stretch he’s mentioned that he feels good physically. So it’s unlikely the issues stem from an injury he’s playing through (like the herniated disc last season).

But about that release point… if we look back at 2015 and 2016, we’ll actually see a similar trend as the seasons went on: 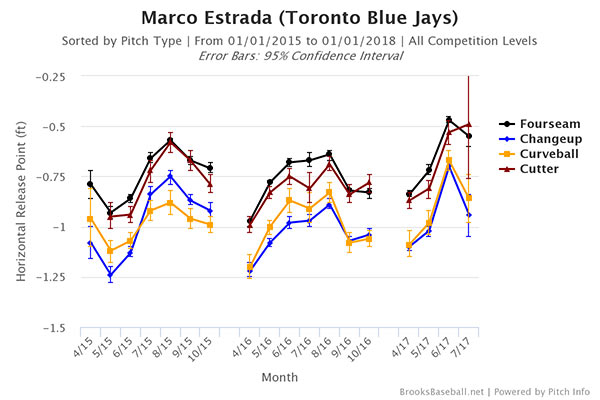 In-season changes in mechanics happen with most pitchers and it doesn’t necessarily correlate with him struggling. But it’s interesting to look back on the previous graph and look at his last start against the Tigers. His release point is back to its pre-June position! This seems like too sudden and severe a change to be by accident.

If Estrada was changing his mechanics in an effort to get more on top of the ball, the results haven’t followed suit a month and a half later. Maybe the game against the Tigers on Sunday represented a conscious change the other way. It’s also possible that he just moved to the right on the rubber and didn’t change his mechanics at all.

Another layer to the problem might be pitch selection. Since June 1st, he’s relied more on his 4-seam fastball when behind in the count:

A fastball is usually expected in a hitter’s count and Estrada has been more predictable. He might benefit from throwing something else when he’s behind, perhaps even more cutters.

It’s hard to know what to expect moving forward but it’s possible that the home run surge has caught up to Estrada a little bit. His 1.18 HR/9 from earlier in the year is below the major league average of 1.35 against starting pitchers. And his 12.1% HR/FB on the season is getting closer to major league average as well. For a pitcher who lives high in the zone like Estrada, he relied heavily on pop-ups to be effective. With the ball likely being juiced, it’s possible that some of those pop-ups are turning into fly balls, and some of those fly balls are turning in home runs. It’s possible this might be the new norm from him.

But as mentioned previously, if he can improve his command and locate better in the zone, hard contact should decrease and some hits will turn into outs. I’m not sure we’ll ever see the 3.15 ERA version of Estrada again, but something close to that is still a very useful pitcher.