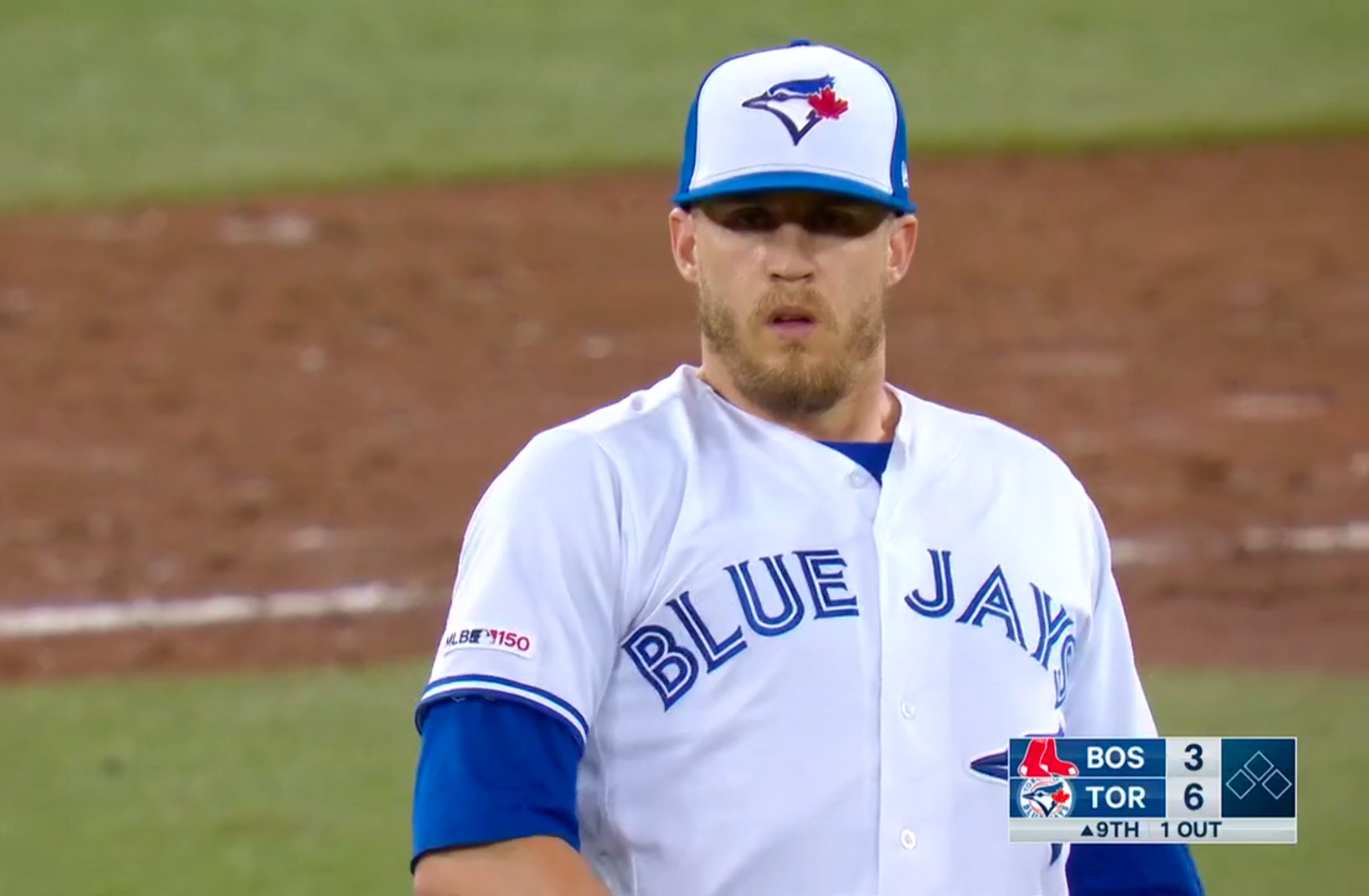 On the night of May 1st, 2018, Ken Giles walked off the mound after serving up a 3-run home run to Gary Sanchez of the New York Yankees. It was a rare sight to see the Houston Astros’ closer being pulled mid-inning — Giles had a 1.80 ERA in 11 appearances prior to the game — but an even rarer sight was about to unfold. As Giles approached the dugout, he delivered a solid right hook to the face. Not to the face of a teammate, or an opponent, but to himself.

Uh, did Ken Giles just punch himself in the face? pic.twitter.com/Y8kbDIDVtl

This self-inflicted blow proved to be a harbinger of things to come.

From “the punch” on May 1st through July 10th, he posted a 6.53 ERA and a 1.60 WHIP. There was also a rift between Giles and the team’s staff that culminated on July 10th – the last game he would pitch for the Astros. Cameras caught this exchange between the pitcher and manager AJ Hinch.

Ken Giles just said "F you man" to AJ Hinch when pulled after giving up two hits and not recording an out in the 9th. Please get rid of him. pic.twitter.com/jvoVh5bI6Y

In most lines of work, telling one’s boss where to stick it usually results in unemployment. Sure enough, Giles was demoted to Triple-A the next day and traded to the Blue Jays less than three weeks later.

Now in his first full season in Toronto, everything is coming together. Giles is quick to credit pitching coach Pete Walker as the biggest reason for his turnaround. He’s obviously happier than he was in Houston, having found an environment in which he can thrive again. And the numbers indicate that he’s a better pitcher now than perhaps ever before. 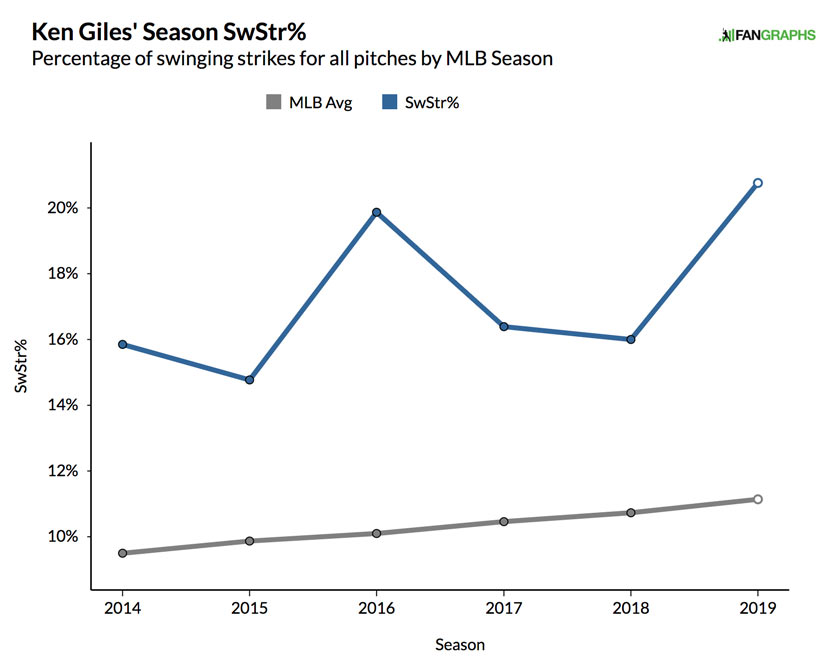 Missing bats is a quality that almost all of the elite relievers share and Giles is no exception. Since 2016, only one other pitcher in the game has a higher swinging strike rate than Giles’ 18.2% – Josh Hader at 19.6%. That’s pretty remarkable when you consider the names behind them include two of the best closers in history, Kenley Jansen and Craig Kimbrel. Giles has had elite skills for a while but the results haven’t always been there, as evidenced by his ERA in each of the last five seasons: 1.80, 4.11, 2.30, 4.65, and 1.59.

This year the results have been superb. He’s been even more confounding for hitters, flaunting a 20.3% swinging strike rate and an ERA that is sixth best among qualified relievers. His 1.55 FIP is second best. ERA predictors such as K-BB% and SIERA both rank him fourth. In other words, he’s probably deserved the good results he’s gotten to date.

Is this sustainable, though? Probably not at such a high level because that’s darn near impossible for any pitcher. But it’s not like he’s riding a favourable BABIP. It’s actually quite high at .364 so some regression there could help offset any home run trouble he runs into (his 6.9% HR/FB ratio is notably lower than his 8.0% career rate, and the ball is flying more than ever this year).

But why is he so good now when less than twelve months ago he was so bad? A change in pitch mix and location is a major reason. 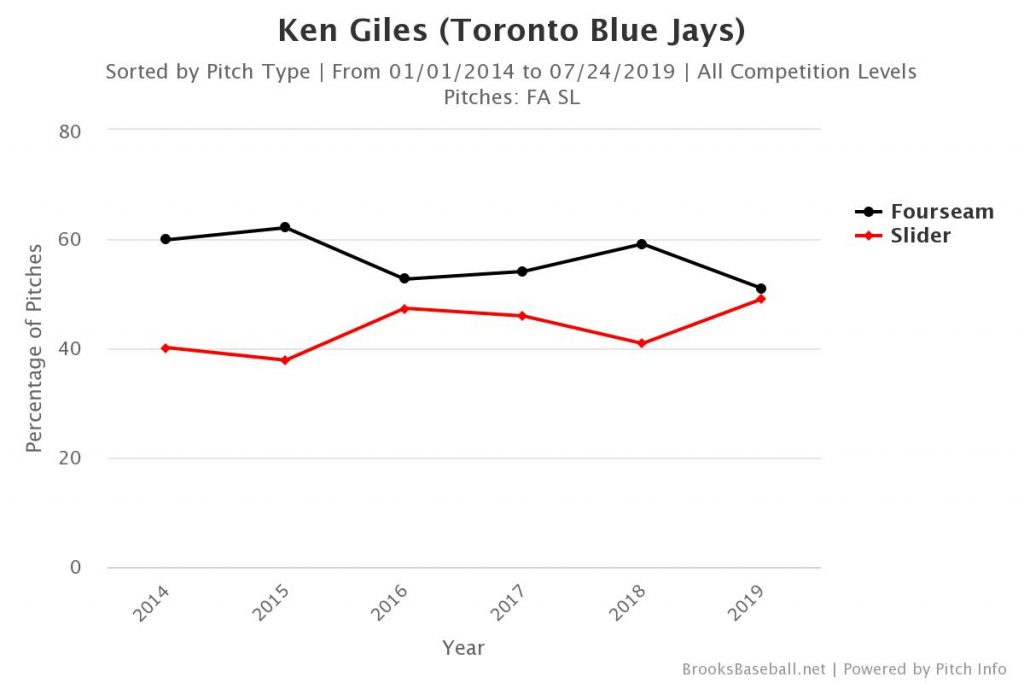 It didn’t seem like he had much confidence in his slider last year as he relied on it just 41% of the time and his fastball 59%. This year it’s a 49/51 percent split, a career high rate for the slider. And that’s a good thing because it’s producing some absurd numbers.

Of the pitchers who have had 50 or more at bats decided on a slider, Giles’ .132 wOBA leads them all again.

By some measures, the best slider in the game right now belongs to Ken Giles.

That was not the case last season when his .246 wOBA ranked in the middle of the pack. Right-handed hitters in particular crushed the slider. As Pitch Info shows, righties had never slugged over .306 against the slider until 2018 when it shot up to .610 SLG – a mark that ranked in the bottom 5% last year among breaking balls. 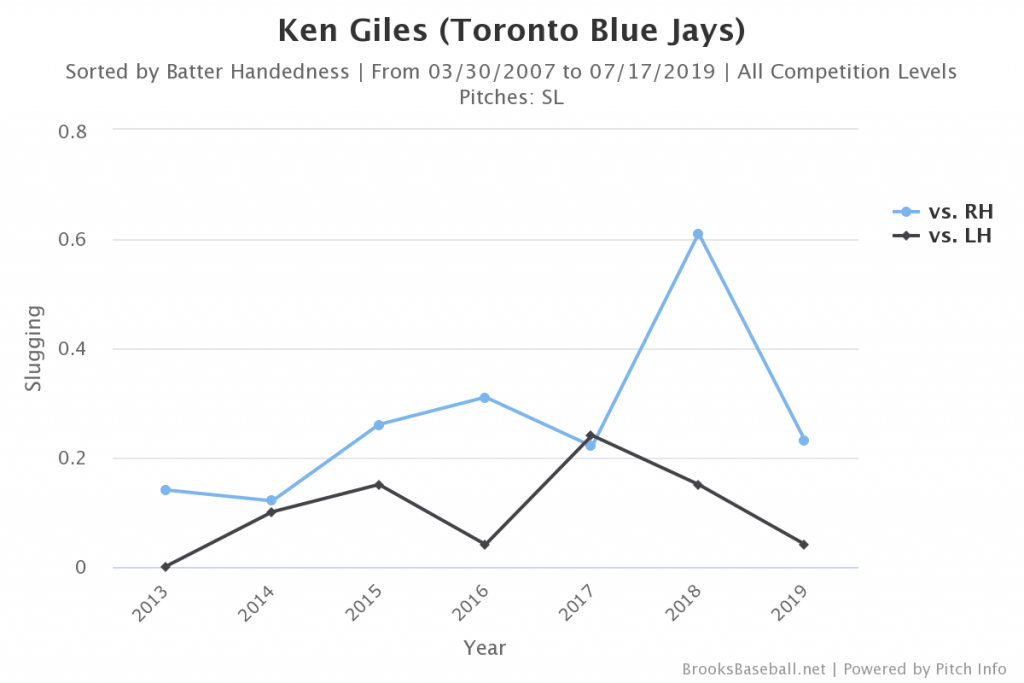 But it’s not the change in pitch percentage alone that’s behind his success. As is almost always the case, it’s better command.

The easiest way to illustrate the year-to-year difference is with an image of pitch location. Last year he was leaving too many sliders up and this year he’s burying them down and out of the zone.

Left-handed hitters were an issue too.

It’s actually surprising he didn’t get burned more last year against lefties. He threw a ton of sliders in the strike zone, right in their wheelhouse. When he does that, this is what can happen:

Of course now that he’s locating below the zone more in 2019, he’s producing more swings and misses like this:

His 2019 success is not just due to better slider placement. Hitters are having such a tough time laying off – his chase rate this year is among the league’s best – because the breaking ball plays off the high fastball so well.

And, you guessed it, he’s locating fastballs more effectively too.

A week ago, Giles had an at bat against Christian Vazquez of the Red Sox that offered a good example of his plan of attack.

The first pitch is a 96 mph fastball high in the zone, which Vazquez gets a piece of. Giles goes up even farther with the second pitch, but it’s too high to offer at. Still, the back-to-back fastballs have established eye level and timing. The third pitch is a slider down and away, and Vazquez flails at it. The camera angle at Fenway is a bit deceiving, but Giles’ slider has more 12-to-6 movement than any sweeping side-to-side break. The third pitch probably never looked like a strike to the hitter because it was so far outside. Perhaps sensing that Vazquez will lay off another one this far outside, Giles comes back closer to the plate with a slider, but buries it in the dirt for the strikeout.

Not only is he throwing more sliders below the zone to hitters, but he’s locating his fastball higher as well. According to Statcast, his average vertical location is 0.24 feet (almost 3 inches) higher in 2019 than it was in 2018. His two primary pitches are converging less and have become more difficult to hit.

Of course it doesn’t hurt that he can touch triple digits with the heater. Hitters are timing up for that and then flying open with a change of speeds up to 15 mph.

Hitting Ken Giles was always a challenge, but this year it’s been nearly impossible. With the trade deadline approaching he might be wearing another uniform soon, but his time in Toronto has been invaluable. Emotionally erratic with crumbling job security, the move out of Houston has allowed his electric arm to dominate again. It’s been a treat to watch even if it is short-lived.