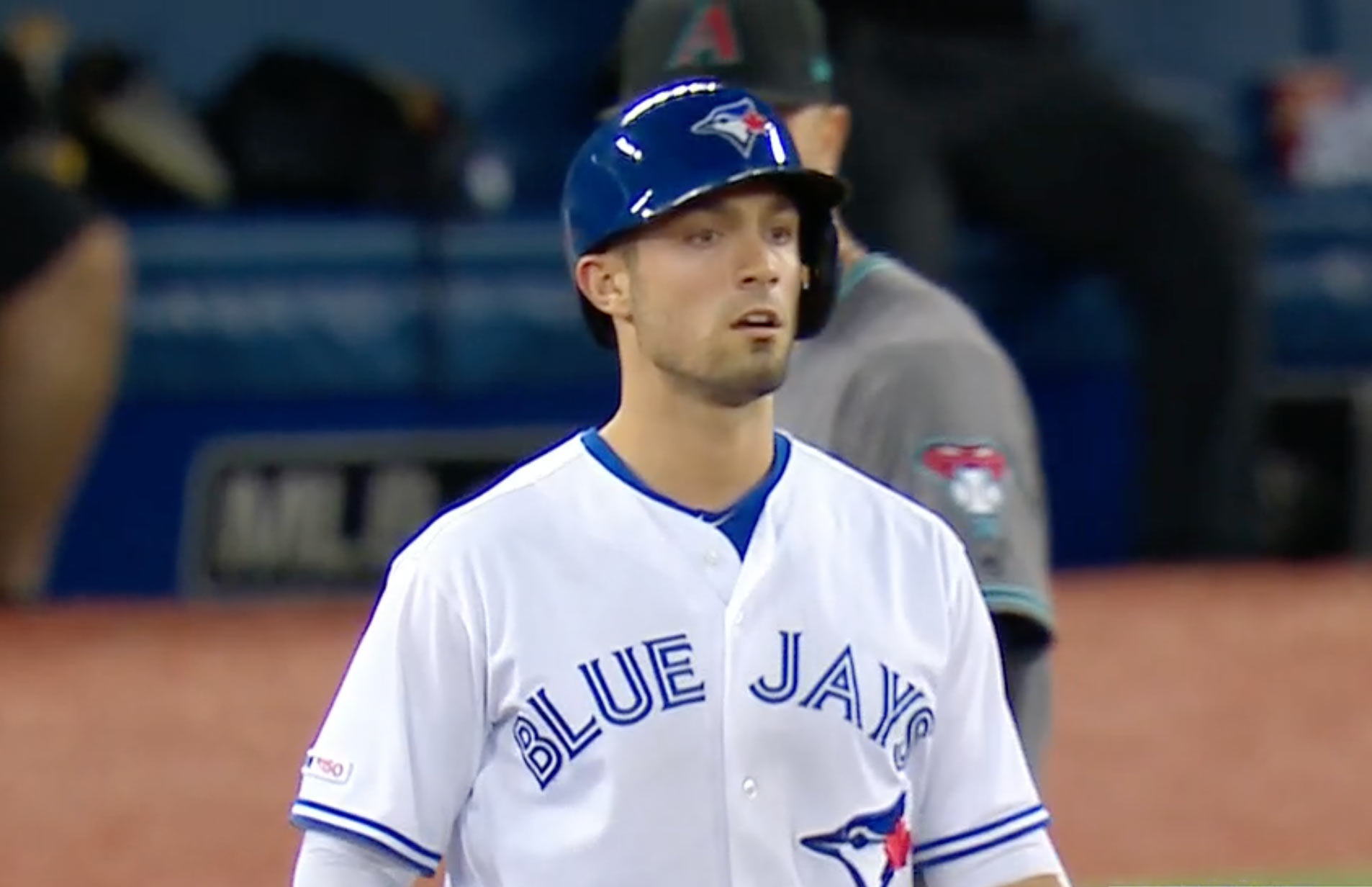 A propensity to swing and miss has always been an element of Grichuk’s game. So naturally you’d think his struggles were the result of a further decline in plate discipline. Not so. 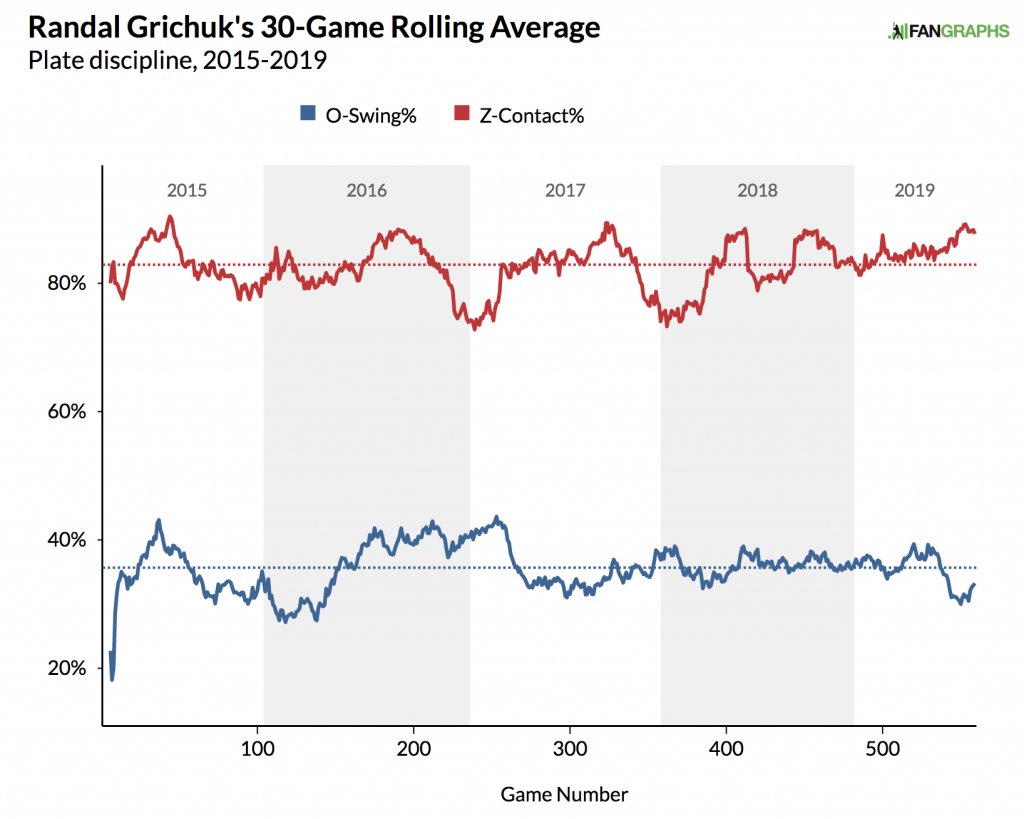 His contact rate on pitches in the strike zone (Z-Contact%) is at a career high. His swing rate at pitches outside of the zone (O-Swing%) hasn’t been this low in three years. Huh. Ok.

On a recent Blue Jays broadcast, the announcers mentioned how Grichuk has been working to be more selective at the plate this year. I don’t recall them elaborating and getting into specifics (a shocker for Sportsnet, I know) but my interest was piqued. These recent trends indicate that his hard work might be paying off.

Don’t offer at bad pitches, swing at good ones. Sounds simple, but it can take years to improve at this. Sometimes players never do.

But if Grichuk has become more selective at the plate, why aren’t the traditional statistics reflecting that? A .222/.263/.433 triple slash line in the month of June is nothing to write home about. Part of it might be simply due to bad luck.

From the beginning of the season through May 31, his average on balls in play on pitches in the strike zone was pretty good. Seven of the nine sections had a BABIP of .286 or higher, as you can see below. 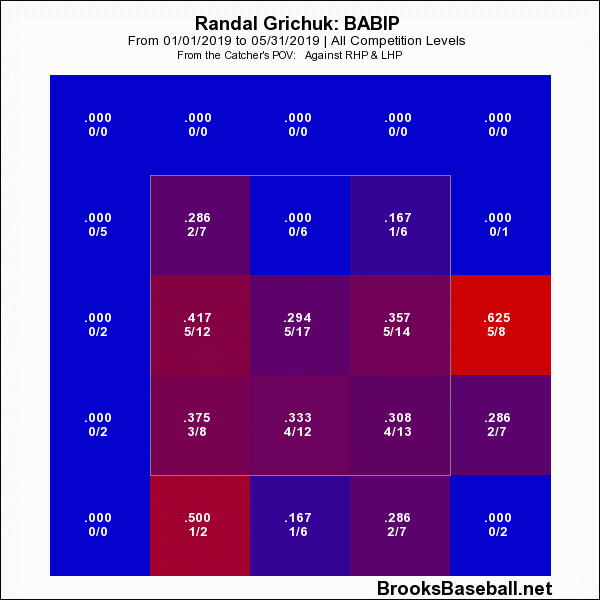 From June 1st through today, it’s a different story. 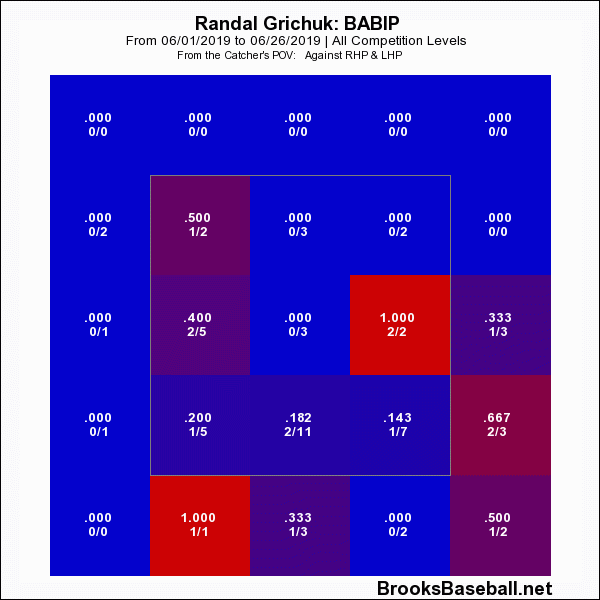 He hasn’t seen much success on pitches inside the strike zone this month, most notably dead centre and in the lower portions. I expect this to improve because A) obvious small sample size and B) he’s always been a good low ball hitter, as these career averages indicate: 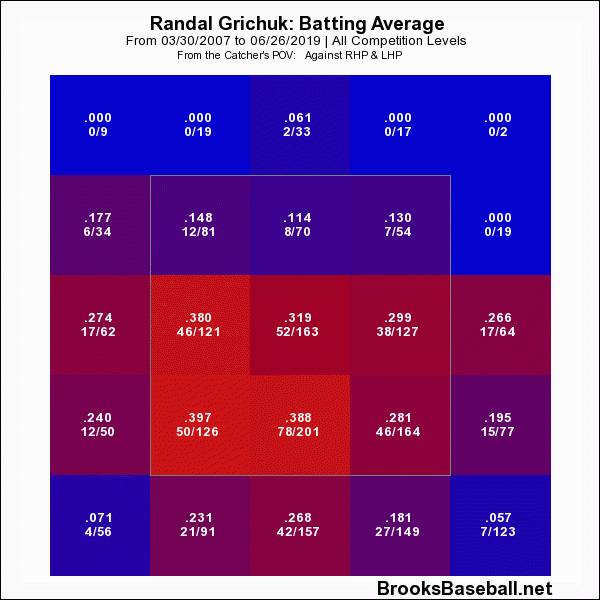 So, one last chart before moving on to some GIFs. Graphs might not be what you came here for, but I promise this one’s important.

This is a 45-game rolling average of batted ball direction, and it makes me wonder if some changes under the hood are taking place. Grichuk’s been going up the middle at a rate like he never has before.

What does this mean? Well, maybe nothing. A small round object thrown at varying speeds, hit with another round object, results in a lot of noise. And every time Grichuk’s spray pattern became extreme, it didn’t take long to regress to the mean. This is almost certain to happen again, but to what extent?

Video from earlier in the year confirms that he has, in fact, been hard at work.

The first clip is from April 3rd.

And this one is from June 20th:

The most obvious difference is the angle of his bat. In April, it was pointed down prior to the pitch and in June it’s more upright. When the bat head is pointed down, it has farther to travel to get up into position when the swing begins. Another less obvious difference that goes hand-in-hand (pun intended) with the change in bat position is the height of his hands.

The following two screenshots are from the moment when Grichuk starts to distribute his weight to his back leg, just before his front heel lifts off the ground. The first is from April, the second from June. 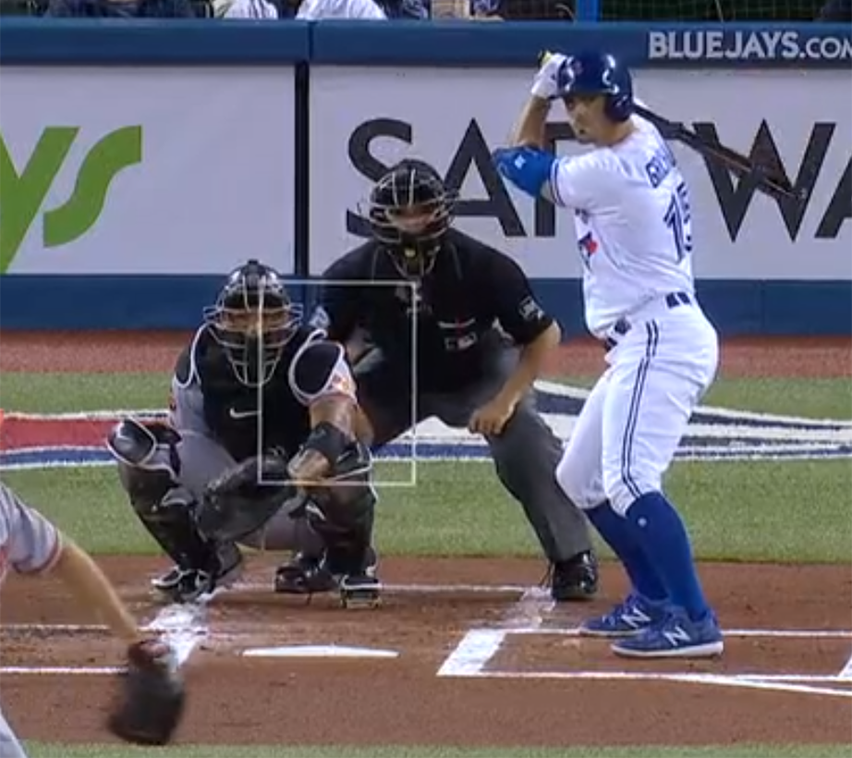 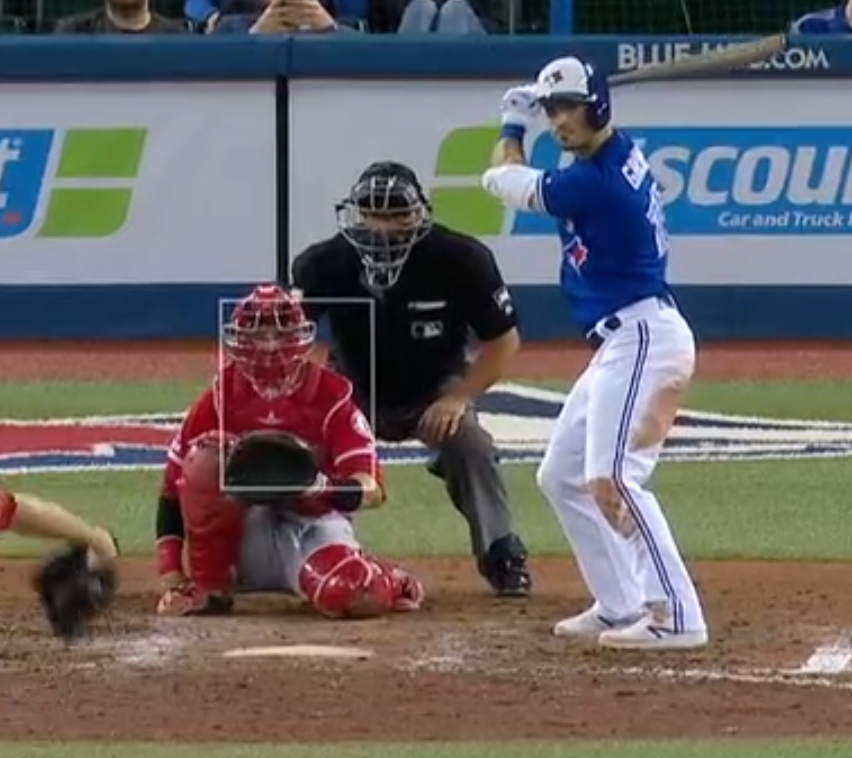 His hands were higher in April and his wrists were bent back. In June, his front arm and wrists are much closer to the position they need to be in a fraction of a second later when his leg is in the air and weight begins transferring forward: 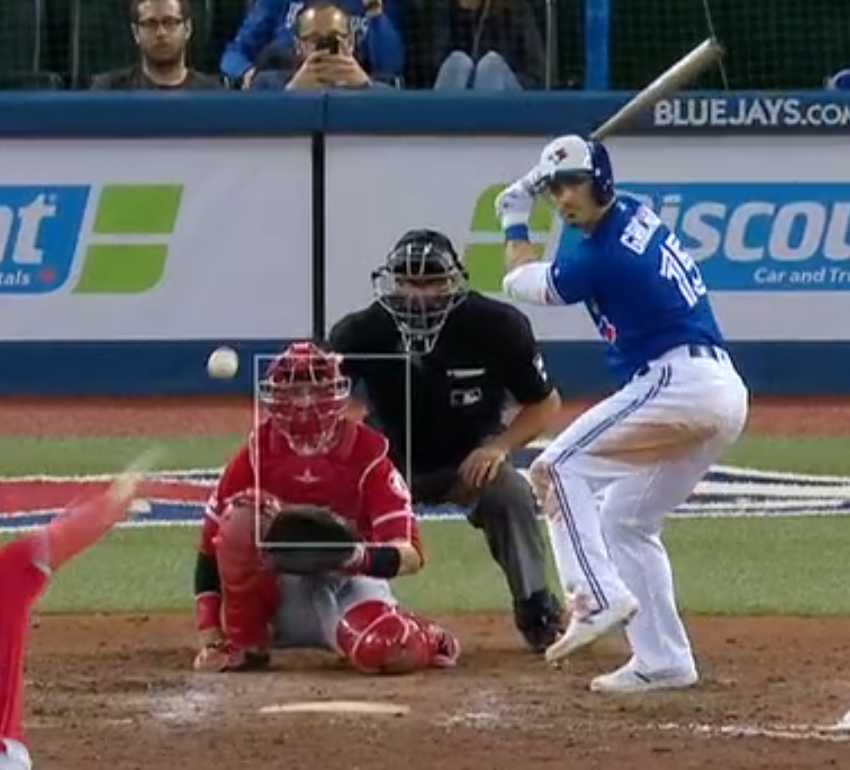 I guess this is a long-winded way of saying that Randal Grichuk made some positive swing changes. He eliminated unnecessary movement and is hitting more balls up the middle than ever before. And a change in spray pattern should have a positive impact on his production considering…

He’s seeing a lot more infield shifts this year. And consider league averages on ground balls by right-handed hitters into shifts: To the pull side it’s a .175 batting average. No surprise there, since three infielders on the left side will have that effect. To the centre of the field in shifts, it’s a much higher .292. I don’t know if Grichuk’s swing change was specifically done to combat shifts or just to give him a better chance at hitting the ball with authority. Either way, it’s positive.

His offensive ceiling is limited by his low contact rate and poor results on breaking balls. We shouldn’t be surprised when he has the odd rough stretch. But you have to feel optimistic that, eventually, a quieter swing will produce better results.

Making adjustments in the middle of a season can be challenging. But don’t be surprised if a hot stretch is right around the corner.