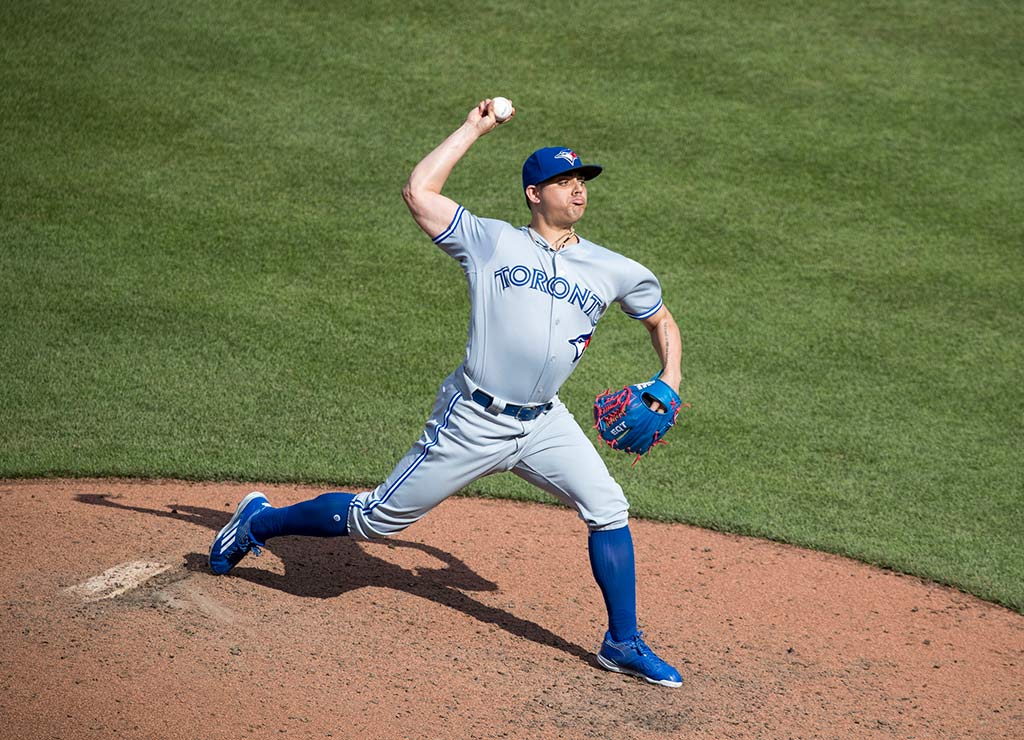 Tuesday Morning Blue Jays closer Roberto Osuna was arrested and charged with domestic assault of an unnamed woman. According to Hazel Mae of Sportsnet, a police source confirmed it was his girlfriend. MLB took action and immediately placed Osuna on administrative leave according to Shi Davidi. Obviously this is horrible news and thoughts go first and foremost to the victim. If previous domestic violence cases in baseball are any indication (Aroldis Chapman and Jose Reyes come to mind) Osuna might be facing a lengthy layoff via suspension – as he should if the allegations are true.

Reactions to this news today are of shock and disappointment among the Toronto fan base. Last season Osuna endeared himself to fans by revealing he was dealing with anxiety. The overwhelming reaction among fans was positive. Affectionately nicknamed “Bob”, the then 22-year old felt like our little brother; the kid we wanted to protect and offer our support to during a challenging time. The awareness and discussion surrounding mental health on social media also picked up, a positive consequence of an otherwise difficult situation. Because of what he went through and how important he has been to the team, Osuna had become one of the most beloved members of the Jays.

Today, our perception of him has changed.

Growing up in a poor village in Sinaloa, an area of Mexico dominated by drug cartels, it was remarkable that Osuna ever made it to professional baseball. But a feel good story of overcoming adversity has turned into an all-too familiar tale of violence against women. This news should turn the stomach of any Jays fan (and anyone, for that matter) with a moral compass. And while “innocent until proven guilty” is an essential tenet of the court system, we’ve seen this movie far too many times to sit idle and not talk about it.

It’s a reminder that icons and celebrities will break your heart. They’re flawed humans – some are decent people who make bad decisions and others are simply awful people. I don’t know Kevin Pillar personally, but at minimum he made a bad decision last season when he directed a homophobic slur towards an opposing player. He was subsequently suspended for two games. As diverse a city as Toronto is, Pillar’s words hurt a great deal of people. How we reconcile reprehensible behaviour with our fandom and affection for the team and players is often difficult. But it doesn’t have to be.

We don’t have to yell at Osuna if we see him on the street. We don’t have to burn his jersey or demand he be traded. If he is truly as good a kid as those around him say he is, then hopefully he feels awful, and will learn from this to become a better person. I hope that’s the case. But he’ll have to work through that while the victim works through her own, much more difficult, circumstances. Circumstances she didn’t ask for, nor deserve.

The next time Roberto Osuna takes the field (which might not be soon) fans might feel conflicted. We can choose to boo him, write messages on signs, or simply not watch or attend in boycott. The level of outrage expressed, if any at all, is up to the individual fan. But all of us can choose to support our local women’s shelters. We can support victims. Lead by example as kind and loving partners. Seek help and talk about the challenges that lead us to commit these crimes in the first place. If we want more athletes to cheer for who are good human beings, we should damn well take an active role in making that happen.

The domestic violence statistics in Canada are appalling. No profession or demographic is immune from it. And sometimes as a sports fan, the human element becomes more important than the entertainment element. The passion and bond we have for the game is not immune to being suppressed or severed by external factors. Domestic violence may not be what we want on our minds when we’re at the ballpark on a sunny afternoon, or when we turn the TV on with friends. Baseball, and sports at large, is an escape. But as long as these crimes occur in our society, we don’t get the privilege of tuning it out and ignoring it. We haven’t earned that yet.

If you’d like to learn more, volunteer or donate to women’s shelters in Canada, visit endvaw.ca.