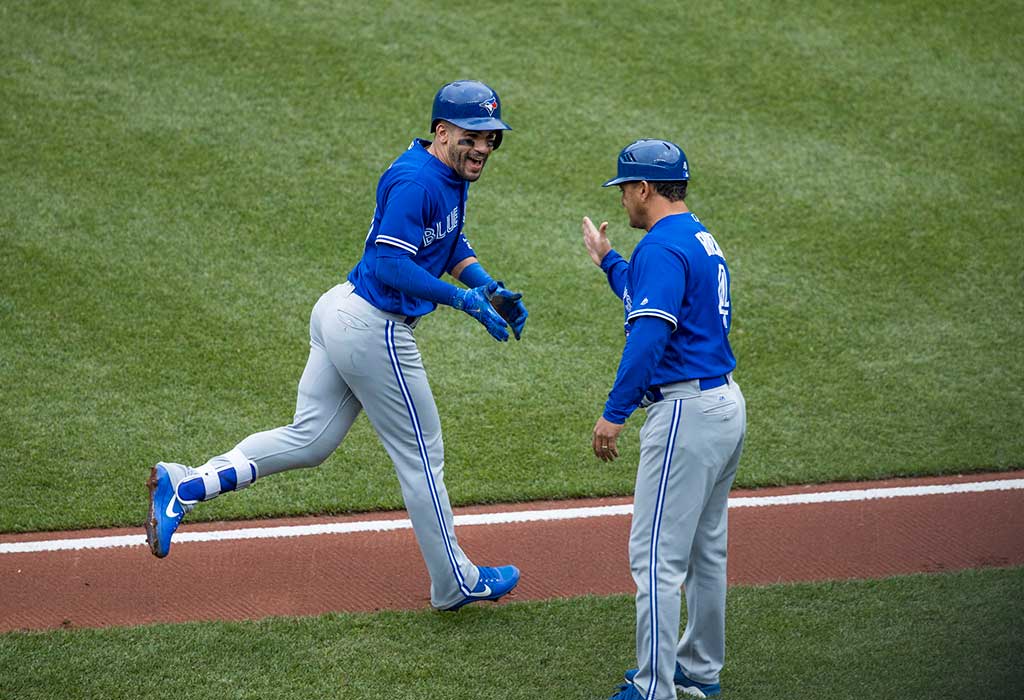 After an awful start to his 2017 season, Devon Travis started hitting the cover off the ball in mid-May. Finally appearing to be healthy, Travis was playing like the potential star the Jays thought they’d landed from the Tigers in the Anthony Gose trade (Gose, recently converted to a pitcher, was waived by the Astros on Monday). So it was especially disappointing when Travis’ surgically-repaired right knee gave out on him again and ended his year in early June.

Indeed, Travis was hitting well. He posted a .474 wOBA (4th best) and .408 AVG (2nd best) in the three week stretch of May 14th through his final game on June 4th. If we look at graphs of 30-game rolling averages, we can clearly visualize the ebbs and flows of his seasons. His hot streak in 2017 is hard to miss: 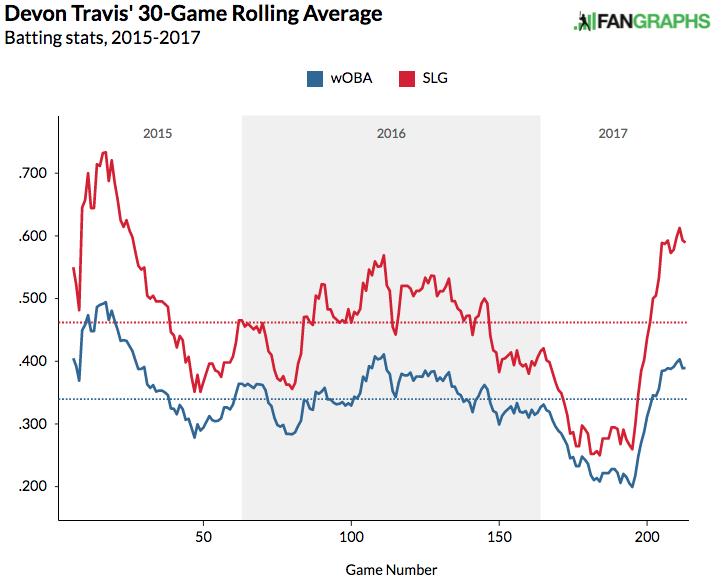 Leading up to the season-ending injury, he was hitting for extra bases more than he had in the past two calendar years. How long this streak would’ve lasted is anyone’s guess, and there was evidence of some good fortune propelling him to such a lofty level of production.

Line drives fall for hits far more often than fly balls or ground balls do, and once his BABIP caught up to the favourable batted ball type, his production spiked. 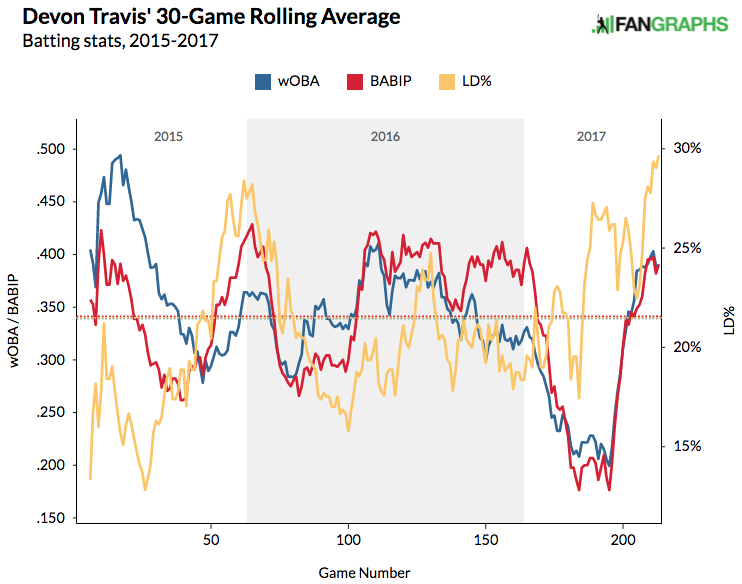 A line drive rate approaching 30% and a BABIP near .400 aren’t sustainable numbers. But he did make a real change in his approach between April and May which may have been the catalyst to finding his swing. As reported by The Athletic, he started standing a bit farther away in the batter’s box.

The impetus for this was his awful start to the year. He hit just .130 in March and April with just three extra base hits and hitting coach Brook Jacoby was probably more than willing to tweak some things. But there was another good reason for a tweak, intended or not – Travis’ plate discipline had always been below average.

Having a low O-Swing% (chase rate) usually indicates an ability to have a good eye at the plate and be able to lay off tough pitches. And a high Z-Swing% is a good thing as long as the player is able to make enough good contact. And while Travis has always had above average contact rates on pitches in the zone (Z-Contact%), the poor differential between chase rate and in-zone swing rate has limited his on-base abilities.

But by looking at another graph, we actually see a positive change in this very thing last year: 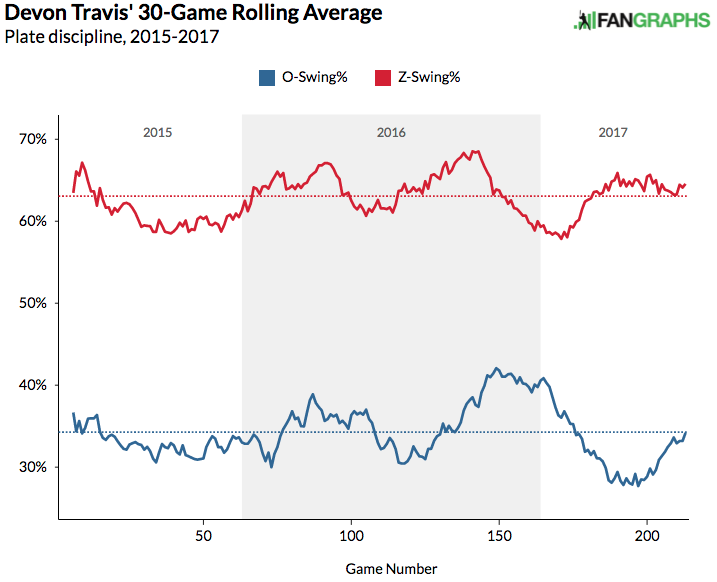 The widening gap between swings inside vs. outside of the zone compared to his career rate is a positive sign. To get a more precise measure of this, let’s calculate the differential between Z-Swing and O-Swing on 30-game rolling averages and isolate that on its own graph. The peak in 2017 below represents a career-best rate of swinging in zone vs. out of zone.

The red line is May 14th, when his production took a leap forward. What’s notable is that his plate discipline improvement occurred prior to that breakout. Even though the production hadn’t followed suit, an underlying trend was emerging. Travis may have been developing a more disciplined approach at the plate. It’s possible that changing position in the batter’s box was a key to this.

“But aren’t these sample sizes too small?” I hear you say. Fair question, so let’s refer to the work of Russell A. Carleton on stabilization points. As he outlined at Fangraphs in 2011, swing and contact metrics actually stabilize at a very low number of plate appearances (50 PA). That is to say, O-Swing% and Z-Swing% rates can offer reliable data fairly quickly. And this makes sense. They are less prone to luck and more a measure of things like pitch recognition or bat control. In other words, underlying skills.

Our rolling 30-game averages (about a month’s worth of data) include over 100 plate appearances. So our samples would appear to be sufficient in the context they’re being used.

Not to throw cold water on this, but it’s worth pointing out that his walk rate did not improve along with better plate discipline. Logically, you’d think swinging at fewer balls out of the zone would equal more walks. But that shouldn’t torpedo our optimism from the previous paragraph. Travis has always been a hit-to-contact guy. He’s not going to strike out a ton and he’ll put the ball in play. Even if his more selective approach doesn’t lead to more walks, it could lead to better quality contact in the zone.

Finally, we need to address the regression clearly shown in the above graph leading up to the point his season prematurely ended. His selectiveness at the plate started coming down closer to his career average. Was the new Travis a short lived mirage? Maybe. I’m not so sure though.

It’s a shame Travis got injured, for many reasons. One being that we don’t have more data after the point at which he made some changes. Baseball is a game of adjustments, and we never got the chance to see what might’ve happened to his swing rate once he inevitably cooled off.

But based on what we do have, my hypothesis is that once the hits started coming he gained more confidence and consciously decided to get into swing mode. After putting up a dismal March and April, wouldn’t he want to ride the good fortune suddenly befallen upon him? 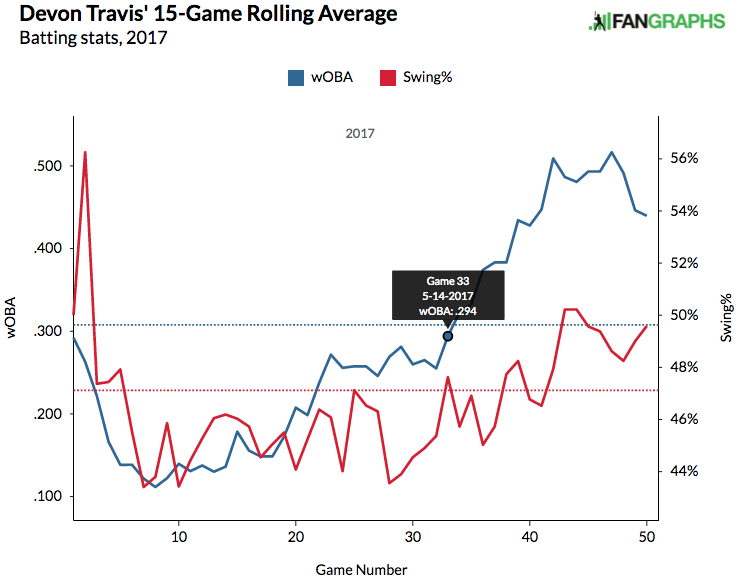 Sure enough, his swing percentage started to creep up shortly after his bat woke up on May 14th. And why wouldn’t he continue to swing? As per Statcast, he had a .365 wOBA against pitches out of the zone from May 14th on. League average last year was .299. But when the hits stopped falling, what would he have done? Continue to chase pitches or return to a more selective approach again to put pressure on the pitcher? I guess we’ll find out in a couple months.

The most important stretch of Travis’ season may have come without any fanfare, before his injury-shortened hot streak occurred. He showed he could do something for the first time, and that’s notable. Whether or not this will be just a blip contained to 2017 remains to be seen. But the small adjustment in the batter’s box coincided with a new ability to be selective at the plate.

What makes Travis the player he is are his contact skills and ability to hit to all fields. In an age of Three True Outcomes, he’s a refreshing throwback in this regard. And despite his slow starts and injury history, I doubt he wants to change much about his game. After all, he has posted 6.0 rWAR in 213 career games. Put another way, that’s a 5 win player per 650 plate appearances.

Can he shrink the zone again in 2018 and maintain it for longer than a month? That’s an exciting thought. Because it’s possible we haven’t seen the best of Devon Travis yet.