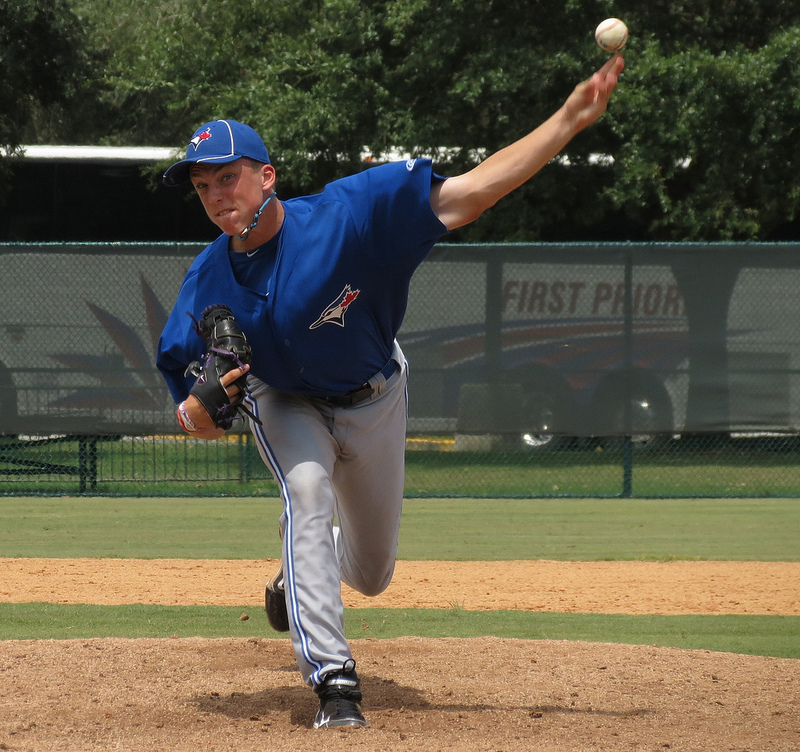 Three of the four prospects below have a good chance to contribute in 2018 at the major league level. Whether or not they do largely depends on their health and who’s blocking them on the Jays.

2018 could be an interesting year as fans have some MLB-ready talent to finally look forward to. Alex Anthopoulos’ blockbuster trades in 2015 cleaned out the upper levels of the system. But the next wave of prospects are now poised to show their stuff in Toronto.

Suddenly the Jays have a plethora of pitching and up-the-middle position players with upside. The following is just a portion of that talent, but it’s talent that could have an impact sooner rather than later.

Jansen exploded in 2017, going from a fringey top 30 organizational name to potentially the Blue Jays catcher of the future. There’s still work to do but the future looks bright.

Sitting comfortably ahead of Max Pentecost and Reese McGuire on the catcher depth chart, Jansen will need to do two things in 2018 to take the next step.

The first is to stay healthy. Jansen missed two months in both 2015 and 2016 with hand injuries, limiting his time on the field. Healthy in 2017, he appeared in 104 games across three minor league levels. But perhaps the most impressive statistic was his 41 walks to 40 strikeouts.

A capable defender behind the plate with on base abilities, he has a fairly high floor. If nothing else, Jansen should have major league seasons in a backup capacity.

How much more he has and how soon is unknown, but the Jays could opt to be aggressive and have him start the year as Russell Martin‘s backup. Working with a major league pitching staff and a mentor like Martin might be the next step for the 22-year old.

He threw out just 24% of base stealers in 2017 but that was across three different levels with a ton of different pitchers on the mound. He’s got a 50 grade arm on the 20-80 scouting scale and his top pop times in his draft year were 1.85, near the leaders of his class.

Some of the hype has dissolved since the Jays signed him as an International free agent in 2016. He’s 24 years old and struggled with minor league pitching. But the Jays signed him to a 7-year contract and will be patient with him. Richard Urena is ahead of Gurriel on the depth chart at middle infield, and Bo Bichette might soon be as well. The acquisitions of Gift Ngoepe and Aledmys Diaz further push Gurriel down the ladder.

If Bichette gets the lion’s share of playing time at shortstop in New Hampshire next season, Gurriel might have to get his reps at Triple-A Buffalo. That seems like a challenging request given his less-than-stellar 2017 stat line, but the tools are there for him.

Gurriel’s track record in Cuba suggests that he’ll eventually hit well in the minors. And sample sizes being what they are, it’s possible that shows up early in 2018. If he can play at multiple positions it will further enhance his value to the Jays. It’s also possible his injuries earlier in the year depressed his offensive numbers.

With Toronto’s middle infield depth suddenly strong, Gurriel will need to maintain if not improve upon his 2017 to remain relevant in the Jays’ system. But even though there is a crowd of names at his positions, his upside remains as good as any of them not named Bo Bichette.

Borucki was impressive at three minor league levels in 2017 and is a candidate to start for the Blue Jays in 2018. Not bad for a 15th round draft pick out of high school. He proved he can handle a starter’s workload and his plus fastball and changeup has served him well against both lefties and righties.

What Borucki’s 2018 season looks like could be determined by Ross Atkins’ interest in adding a free agent pitcher. He has expressed confidence in Joe Biagini, Borucki and Thomas Pannone, along with other minor league starter depth. And having those three pitchers contribute quality major league innings would allow the team to allocate money elsewhere this offseason. But an acquisition of a big name starting pitcher figures to push Borucki into a bullpen role.

Baseball Prospectus cautions that health and his ability to use an effective breaking ball could hinder his transition to the next level. His development of the slider will be one area to keep a close eye on in Spring Traning.

Alford is capable of making the biggest impact by a Blue Jays rookie in 2018. He’s consistently been ranked among the best in the farm system and will look to put injury concerns behind him.

That might be easier said that done, however, as health has been a major hinderance in the past. Alford has the instincts, tools and athleticism to play centre field in the majors, even if nothing else develops. If his power shows up in games, he can make an even bigger impact.

After playing in just 77 games across four levels in 2017, the Jays sent him to the Mexican Winter League for added reps.

Alford might be the Jays centre fielder of the future, and maybe even their right fielder of the present. However a major free agent acquisition could make Alford’s path to playing time in 2018 more difficult. But his raw power and speed combo is the best in the organization. And if he can hit major league pitching even at an average rate, he’s a valuable MLB player.

2018 Goals: Stay healthy. The rest will take care of itself for this premium athlete.

It’s easy to dream on an outfield with Pillar and Alford, an infield with Donaldson, Bichette, Travis, and Vladdy Jr on the right side or as DH. Maybe Pearson develops into an elite closer and Borucki and Pannone follow Stroman and Sanchez in the rotation. We all know prospects bust and that scenario is unlikely to materialize. But it shouldn’t dampen the optimism in this farm system. There are legitimate every day MLB players in it and we could see some as soon as this Spring.