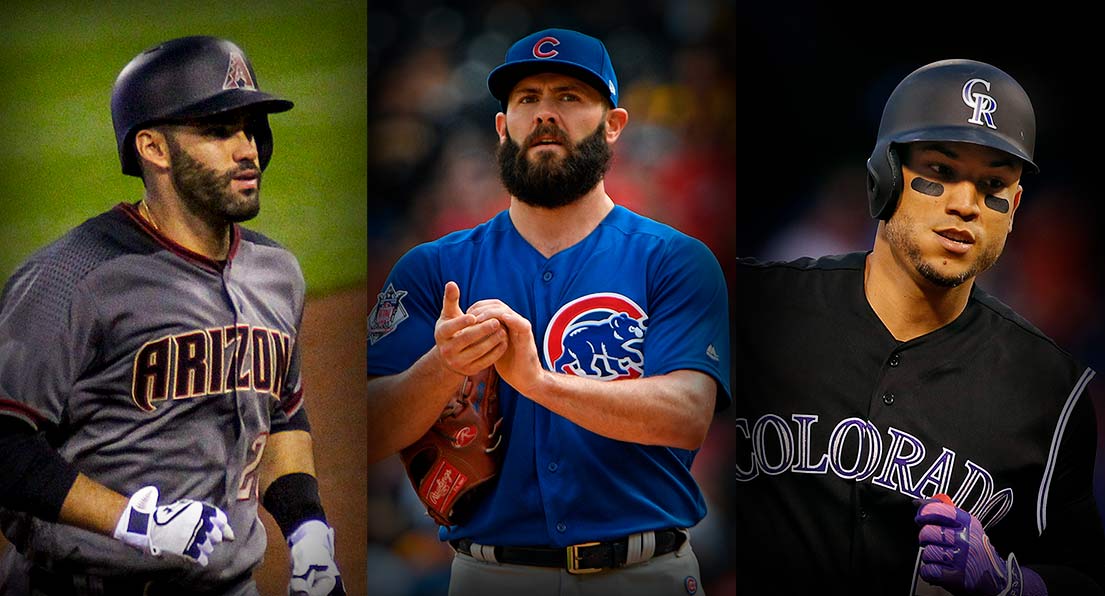 If you’re a fan of projection systems (I am) then you probably know that the Blue Jays are projected to win 83 games next year according to the ZiPS model. That would put them 9 games back of the division winning Yankees but well within spitting distance of a Wild Card berth. What ZiPS is partially banking on is a return to health from some key players. According to Spotrac, Blue Jays players combined to spend 2,172 days on the Disabled List in 2017, the highest total in Major League Baseball. And yeah, their roster will again be one of the oldest in baseball in 2018, but it’s hard to imagine getting hit that hard by injuries two years in a row.

The goal, obviously, is not to get close to the one-game play-in Wild Card, but to clinch it. Or, ideally, win the division. But that’s probably not happening unless they spend to the luxury tax threshold and make some major additions. And fall into some good luck.

So what’s it going to take to earn a playoff berth? Well, over the last five years the second Wild Card team has averaged 88 wins. So the front office probably needs to add about 5 wins, on paper, to this group. Without a massive payroll increase coming, this is going to take some creativity.

Last month, Andrew Stoeten estimated that the Jays have between $20 and $25 million in available payroll after arbitration cases for eligible players. That may seem like a lot, but it will get eaten up very quickly.

Recall last offseason, if you will, when the Astros had similar holes on their roster to fill as the Jays do this year. They signed Charlie Morton as a back-end starter and Josh Reddick to play right field. Neither player was expected to make a huge impact but they still combined for $20 million in 2017 salary.

How the Jays allocate money in free agency will be interesting.

There is a case to be made for signing J.D. Martinez, as he has had seasons of 4.0 WAR and 5.0 WAR over the past four years. It’s possible that he alone could make up the difference in team wins and cost under $25M.

But let’s burst this bubble right now. Steamer Projections peg him as merely a 2.5 win player next season with a 129 wRC+. Maybe that’s selling short one of the elite power hitters in the game – he’s only dipped below 140 wRC+ once in the past four years. But if we’re trusting projection systems for team wins, we also need to trust them for individual players.

At a salary that likely pushes $25M (and maybe higher if we are to believe his agent Scott Boras) this might not be the best use of funds. If they’re targeting a power hitter, I made the case that Giancarlo Stanton will provide better production at a similar yearly salary.

Again though, that’s tying up all available payroll in one player. What do they do about a 5th starter or bullpen additions?

Turning attention to a lower tier of free agent position players, I see a couple options.

The time has come for Carlos Gonzalez to become a platoon player. Once a fearsome middle of the order bat, his awful production against lefties can’t be glossed over by playing home games at Coors Field anymore. That 49 wRC+ and .253 OBP against lefties since 2015 doesn’t come close to cutting it. If the Jays could sign him as the strong side of a platoon in right field with Teoscar Hernandez, they’d add a much needed left-handed bat to the order against right-handed pitching.

MLBTR predicts a one year, $12M deal. The downside is that may only be adding 1 win of value to the team if the man they call CarGo doesn’t experience some kind of bounce-back in a new setting.

Instead of bringing in a new face in RF where there are already some internal candidates (Anthony Alford, Hernandez, Steve Pearce and even Dalton Pompey), why not sign a second baseman? Neil Walker is projected for 2.5 WAR next year across 581 plate appearances and might come in at 2 years and $20 million. Between the eventual injuries to Troy Tulowitzki and Devon Travis, Walker should find playing time, although probably not 500+ PA’s. They could, however, try moving Travis to left field in the event that everyone’s healthy at once.

$10M for a couple wins is good value. This would also allow the Jays to non-tender Ryan Goins, a replacement level player who is estimated to earn $1.8M in arbitration.

They could then turn to the pitching staff, adding value arms like Doug Fister as their 5th starter and lefty Boone Logan to the bullpen.

Meanwhile, pitchers with significant injury risks like Lance Lynn and Alex Cobb are looking at multi-year deals for around $50 million. Their respective Steamer projections are 1.3 and 1.7 WAR. Those are pretty uninspiring totals.

Jake Arrieta, predicted to sign a $100M contract, was worth just 2.4 WAR last season and is projected for 2.8.

Clearly there are value deals to be found and reasons to avoid the big name arms.

In relief, Boone Logan is one of the more underrated pitchers in my opinion. Despite playing two of his last three seasons at hitter-friendly Coors Field, his numbers were excellent:

Stats & ranks among relief pitchers since 2015:

All while pitching 2 yrs at Coors Field

Aaron Loup hasn’t always gotten the job done as the high leverage lefty, and Logan could be a good option for late inning matchups. He earned $5.5M in 2017 with a team option for 2018 (which Cleveland declined). A similar deal is probably in line for the 33-year old now. Steamer projects him to be worth 0.4 wins in 40 innings of relief, but I find wins above replacement is a poor way of judging relievers. If he can provide a high K rate, solid ERA and work in high leverage situations, I’m happy.

Alternatively, the marquee relievers on the market like Greg Holland and Wade Davis may earn $50 – $60 million commitments. Sure, the upside in Logan is not nearly the same as Wade Davis, but it doesn’t need to be with the enormous difference in salary.

So with Walker, Fister and Logan added, and Goins subtracted, we’ve found 4 more wins at a total of $22.7 million. We’re getting pretty close to that 88 win threshold and the Jays would still have a bit of payroll wiggle room to use mid-season.

They would start the year as an 87-win group on paper and see how things go. If by July it looks like they’re in the playoff race, cheap rentals are always available to squeeze an extra win or two out of the roster.

If things fall apart like they did in 2017, the front office hasn’t saddled the club with any long-term commitments. And they would have some appealing players of their own to move at the trade deadline for future assets: Marco Estrada, J.A. Happ, Doug Fister, Boone Logan, Aaron Loup and maybe even Josh Donaldson will be on expiring contracts.

Ok, so it’s a long shot. But the Jays have as good a chance at landing Japanese two-way superstar Shohei Otani as most teams do. If they managed to pull off the feat, this would change everything. Adding 3 wins (as Fangraphs estimated) in a player who only costs the league minimum salary of $545,000 would allow the Jays to use that $20 – $25 million in a completely different way.

Instead of $9M going to Fister, they could sign Lorenzo Cain to play right field. His 4-year $70M contract predicted by MLBTR works out to an average of $17.5M per season. Steamer projects Cain to be worth 3.2 WAR in 2018.

So with $7.5 million to spare, the Jays are now close to being a 90-win team. Plan the parade!

Yeah, not so fast. Of course, adding theoretical wins is not exactly linear, and this is simplifying things to be sure. But the point is, landing Otani would almost single-handedly put the Jays in the mix for a playoff spot. And maybe even the division race with another big signing.

Alas, the chances of that happening are slim. Otani will probably go to the damn Yankees, because why not, right? Ross Atkins will need to be a wizard in free agency and hope for some good health.

But if nothing else, the exercise outlined above should help silence the crowd that wants to blow everything up and trade Donaldson this winter. When you have a legitimate superstar on your team, a top 5 payroll and a healthy farm system, a massive tear-down isn’t necessary when you’re this close to a postseason birth.

At least there is a path to 87 or 88 wins. And this supports the front office’s goal of 2018 being a year of contention, at least on paper. When the games begin, who the hell knows what to expect.