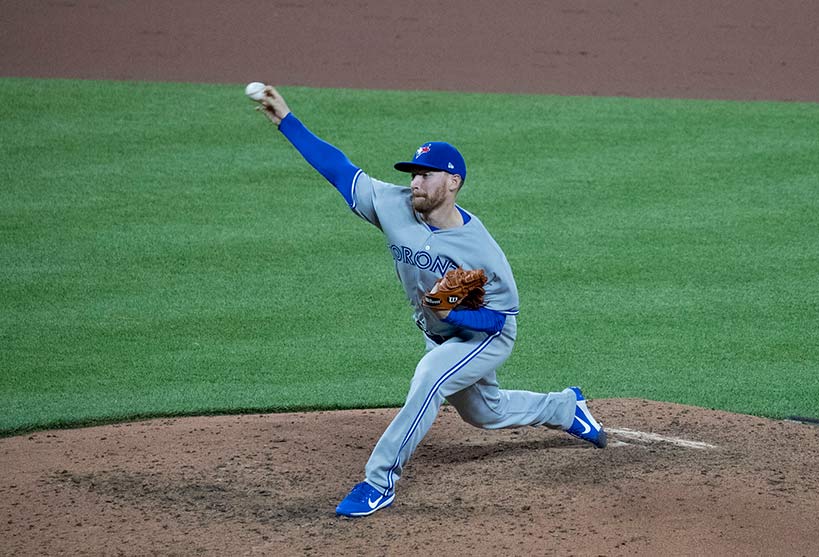 The role of a relief pitcher can be one of thanklessness and irrelevance.

The former can manifest in mundane contract considerations like service time or remaining options. Sometimes a reliever who is pitching well is optioned to the minors instead of an inferior pitcher who would need to clear waivers first. It’s not fair, but it’s reality. And pitchers who provide innings in low leverage situations are easily replaceable, cheap, and often found on the waiver wire mid-season.

The issue of relevance can often be chalked up to the physical demands put on a human arm. It’s a violent motion, thus pitchers go down to injury at a relatively high rate. And the ones who stay healthy but struggle anyway might have an absurdly small number of opportunities to turn it around. Sample sizes of a half dozen innings pitched are sometimes all a reliever has before getting demoted.

So you’d be forgiven if you paid little attention to 27-year old Danny Barnes earlier this year.  He had barely any major league track record and was not considered a notable prospect. When the carousel of relief arms finally stopped moving at the end of Spring Training, Barnes was not included on the Opening Day 25-man roster. It was veterans Joe Smith, Jason Grilli and J.P. Howell who were tasked with insulating the closer, Roberto Osuna. (And yet, perhaps predictably, all three veteran pitchers ended up on other teams’ rosters by mid-season)

Barnes was recalled from Buffalo in the third week of April after injuries struck the Blue Jays’ staff. He had appeared in a mere 12 games for the Jays in 2016, in low leverage situations, and not much was expected of him in 2017.

But as the season went on, manager John Gibbons showed more and more confidence in Barnes. In the season’s 2nd half, only Roberto Osuna saw more higher leverage situations when entering a game:

*inLI is defined by Fangraphs as “a pitcher’s average Leverage Index at the start of each inning.” Further reading: https://www.fangraphs.com/library/misc/li/

Barnes finished the season with a 3.55 ERA and stranded 81.6% of base runners in 66 innings pitched. Respectable production, albeit not very interesting. But if we look past the basic run prevention numbers, we find something worthy of further analysis.

Danny Barnes is doing something extreme

Only four qualified relief pitchers this season generated a higher fly ball percentage than Barnes. Being at the extreme end of a scale is not always a good thing, but in Barnes’ case it is. Opponents hit just .163 on fly balls which was good for 28th lowest among 196 relievers who faced 40 or more batters.

Barnes’ four-seam fastball generates the highest percentage of fly balls among his three pitches (fastball, changeup, slider) so we’re going to take a deeper look at that pitch. There’s an interesting disparity between his results (wOBA) and expected results (xwOBA) of four-seam fastballs resulting in fly balls:

Barnes is in the 86th percentile in xwOBA-wOBA difference. So in other words, when exit velocity and launch angle are factored for, On Base Average on fly balls should theoretically be even better.

His .206 expected wOBA on fly balls from a 4-seam fastball would be the 17th lowest of the 369 pitchers to qualify for this leaderboard, or in the 96th percentile. That’s exceptional! And surprising. This is Danny Barnes after all. But it makes some sense when you consider the below data: Barnes induces one of the highest average launch angles on his 4-seamer and a below average exit velocity on fly balls. If a pitcher is going to give up a lot of contact in the air, this is the kind he wants.

This reminds us of another Blue Jays pitcher, doesn’t it? Marco Estrada has routinely outperformed his peripherals due in part to his ability to generate a lot of weak contact in the air. His combination of fastball and changeup has given hitters fits for years and his four-seamer spin rate has been well documented.

Danny Barnes doesn’t have the same spin rate. Nor does he get strikeouts from as high in the zone from his fastball:

But there are similarities. Barnes won’t overpower batters with velocity. In fact, his 4-seamer’s perceived velocity of 90.6 mph ranks 172nd out of 194 relievers who threw 200 or more fastballs this year, as per Statcast. He also throws mostly changeups for a secondary offering.

And, like Estrada, his strikeout and swinging strike rates are about league average.

So what’s the deal here? A slower fastball, a changeup and a rarely-used slider isn’t the kind of repertoire you’d expect to be exceptionally effective. But it is, as batters are hitting just .190 off Barnes’ fastball and .198 against his changeup.

How much does luck play a part? After all, 66 innings isn’t a huge sample size and relievers who look good one year can often fall apart the next. If you believe Barnes’ 4.58 FIP, 4.89 xFIP and .222 BABIP suggest major regression is coming, there will be others who agree with you. I, however, am not one of them. Pitchers who induce an extreme type of ball in play often outperform their peripherals (see again: Estrada, Marco). It’s possible that if Barnes can continue generating weak contact at high launch angles, what he’s doing will be sustainable.

A key reason for Barnes’ success isn’t found in the Statcast data. As John Gibbons mentioned earlier this year, there is deception to Barnes’ fastball.

“The one thing he’s going to do, you know he’s going to throw strikes and he’s got some deception. I don’t think they pick up the ball that well on him.”

The pitcher agrees, alluding to what is referred to in the sabermetric community as “tunnelling” pitches:

I think it’s harder for the hitter to pick up the spin,” he said. “If they’re looking for a changeup, they need to wait a little longer and read the ball more before they can decide whether to swing or not

Of course, this is also what makes Estrada so effective with the two-pitch combo and low velocity – two different pitches look the same out of the hand but do completely different things on their way to the plate. The hitter is left with very little time to react.

And finally we’re here. This is where Danny Barnes is the best in baseball at something. Turning to Baseball Prospectus, a site that has quantified tunnelling and pitch sequencing, we see Barnes at the top of a 2017 leaderboard containing 303 names.

If we select the pitch sequence of fastball (1st pitch) and changeup (2nd pitch) Barnes leads MLB pitchers in Break:Tunnel ratio, which is defined as:

This stat shows us the ratio of post-tunnel break to the differential of pitches at the Tunnel Point. The idea here is that having a large ratio between pitches means that the pitches are either tightly clustered at the hitter’s decision-making point or the pitches are separating a lot after the hitter has selected a location to swing at. Either way a pitcher’s ratio can be large.
–BaseballProspectus.com

This is his deception. This is why 92 mph can surprise a hitter. And this is why Danny Barnes has a chance to play a big role in the Blue Jays bullpen next year and beyond.

Let’s close with some visual evidence of his fastball and changeup.

The first video is of a high 93 mph fastball getting on a hitter faster than expected.

The second video is of some filthy changeup movement. The break, the double digit speed difference and deception out of the hand is what fooled Danny Valencia. Barnes can even get away with missed location from time to time (as he did here, by almost a foot) because the movement is so significant and the hitter’s timing is off.

Danny Barnes may not be a household name but if he continues to display these underlying skills and stays healthy, he will be in 2018.