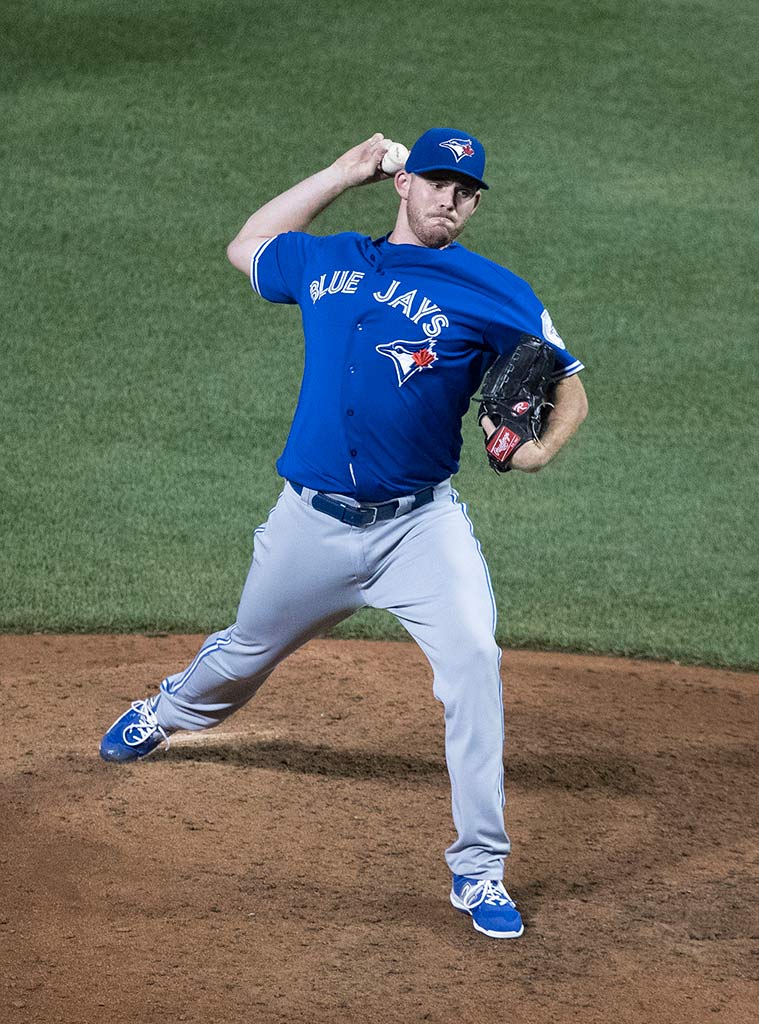 After a wobbly end to Joe Biagini‘s 2017 season, much of the talk among the fan base has turned to whether or not Biagini’s long-term role is in the starting rotation or back in the bullpen. After all, the results have been noticeably different.

That seems extremely premature, however, considering Biagini has made just 18 career starts above the Double-A level (all with the Jays this year). He has a four-pitch repertoire and was being developed as a starter in the San Francisco Giants system before the Blue Jays claimed him in the Rule 5 Draft. There’s no reason to abandon that development now, especially since one of the team’s priorities this offseason is to add more starting depth beyond the top four.

Due to injuries or underperformance, teams will often need to use 10 to 12 different starters throughout the course of a season. This year the Blue Jays started 14. Biagini still has three option years left so they could send him to AAA Buffalo to begin the year in the Bisons’ rotation and recall him when needed. This would give him a chance to refine a few things with less pressure.

While the results to date have clearly not been there, we can find some underlying numbers that paint a more positive picture.

Biagini has the major’s worst strand rate among starters with 80 or more innings, at 59.2%. While he could have legitimate issues pitching from the stretch with runners on base, that still seems like an abnormally poor rate. Even a slight uptick in stranding runners could make an impact on his ERA moving forward.

His 4.47 FIP and 4.22 xFIP as a starter also suggest he’s pitched better than his 5.75 ERA has indicated. And his 30.6% hard hit rate as a starter and 29.4% as a reliever aren’t very different, even though his results as a reliever have been much better.

If we break down his pitch selection as a starter vs reliever we don’t see a substantial change either.

His 53.2% fastball usage as a starter is very similar to his 55.5% as a reliever. His curveball usage is nearly identical. And while he’s flip-flopping with the cutter (FC) and changeup (CH), he’s still using a healthy four-pitch mix.

About that whole strand rate thing

So let’s go back to that. Is Biagini maybe pitching differently with men on base? If a process is flawed, like pitching out of the stretch, it could be a reason for the difference in results. Which are significant.

Let’s look at Statcast’s xwOBA metric (expected on-base average), as it incorporates exit velocity and launch angle to estimate what a player’s wOBA should be, based more on their skill level.

This is interesting. With runners on, Biagini might be getting the short end of the stick. A .361 wOBA still isn’t great, but it’s better than .411. The ERA-FIP discrepancy was the first sign that some bad luck may be to blame for Biagini’s results. This is the second.

It’s true that Biagini is throwing harder with runners on base as a starting pitcher:

Added velocity can be a good thing but not at the expense of command. Overthrowing could be an issue, as his walk rate skyrockets to a 5.0 BB/9 with runners on in games he starts.

Below is his wOBA against by pitch type with runners on base as a starting pitcher.

Ok, now we’re getting somewhere. And that ‘somewhere’ is probably a place where he stops throwing the cutter. It only accounts for 6.6% of the pitches thrown with runners on, but hitters are doing some other-worldly damage against it. Bye bye cut-fastball.

Next up is the four-seamer. Those are getting hammered too. The fastball accounts for 51.9% of the pitches he throws out of the stretch and he obviously can’t abandon that. But he could tighten up his command. Observe a chart of his four-seamer location with exit velocity on balls put in play:

Given the location of a lot of these, it’s no surprise that his fastballs have been hit hard. Ideally, we’d like to see him painting the edges of the zone more rather than clustering them over the heart of the plate.

It appears he really does have an issue pitching the same way with runners on base. In theory, this is fixable. But until we see some real world adjustments, he should remain no more than a fringe option for a 5th starter’s spot.

So What’s Next for Joe Biagini?

Biagini’s pitch arsenal looks like it has the makings of a major league-caliber repertoire. His four-seam fastball is unique in that it elicits an extreme number of ground balls. Among the 142 starters who have thrown 1,500 pitches or more this year, Biagini has the 4th highest percentage of ground balls on four-seam fastballs. He has a good swinging strike rate on his changeup and a curveball with some good depth that’s been hit to just a .190 batting average as a starter. Here, he decides it’s time for Brett Gardner to return to his dugout:

Some will point to Biagini’s advanced age as a red flag – if he hasn’t established himself at 27 years old as a major league starter, chances are he never will. And that’s fair to point out. But there are other pitchers who made their full season debut at 27 who have gone on to be serviceable starters like Collin McHugh and Mike Fiers of the Astros, Matt Shoemaker of the Angels and Tom Koehler, currently of the Blue Jays.

None of them will be mistaken for front-of-the-rotation arms, but even a 5th starter can be more valuable to a team than a relief pitcher. It’s worth sticking out the growing pains with Joe Biagini and seeing where he goes. If that means using a minor league option next year and having him bounce from AAA to MLB as needs arise, so be it. But the Blue Jays’ priority should be seeing if he’s able to improve in the areas noted above, and remain a starting pitcher.