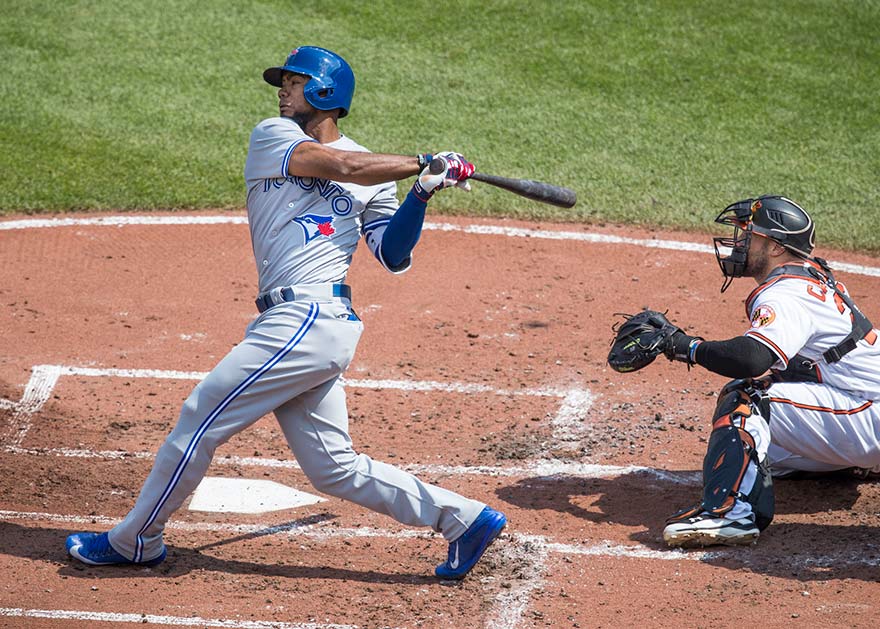 One of the newest Blue Jays, 21-year old shortstop Richard Urena, went 3-for-5 last night and won the game on a walk-off single in the bottom of the 9th. Needless to say, Jays fans were a tad excited.

His plate coverage and ability to get the bat on the ball is phenomenal. Future .300+ hitter.

You bring some energy and youth to this team, if the jays were smart they would have you here opening day! @BlueJays

Love Richard urena should be the starting ss for the jays for years to come. @RichardUrena_ can't believe he is the same age as me. https://t.co/ivyiGhnV2Y

First walk off for #RichardUrena. Few 1st's down, more to come. He's our newest powerhouse 🙂 https://t.co/V2NtMnx5SW

Don't tell me not to be happy about Richard Ureña in a season filled with disappointment. Who cares if it's unsustainable. It's something!

So the Richard Urena hype train is in full swing. All aboard?

I guess it all depends on your expectations.

In the minor leagues, he’s been a light-hitting shortstop who filled in at second base from time to time. His 73 wRC+ at that level in 2017 looks poor on paper for someone thought to be one of the organization’s more interesting prospects. But remember that he is just 21 years old playing at Double-A. The average age at that level is more than 3 years older than Urena. The fact that he was able to hold his own and play adequately defensively is a testament to his natural talent.

His walk rate improved at AA New Hampshire from 3% in 2016 to 5.4% this season. His fielding percentage rose from .949 in 2016 to .960 this year. Interestingly, Urena only attempted one stolen base all season long at New Hampshire. It’s clear from his brief time with the Jays that he possesses good speed, so maybe his minor league coaches simply didn’t prioritize this part of his game. MLB Pipeline put a 55 grade on his speed, which could translate into double digit stolen base totals per year in the majors.

We can’t overstate how young Richard Urena is. He doesn’t turn 22 until February 26th. And a look at other shortstops who have played full seasons at the Double-A level before their 22nd birthday reveals some top 10 organizational names (all ranks are from MLB Pipeline).

According to Fangraphs.com, these are the only shortstops under 22 years of age with 400 plate appearances or more in the last three years in the three Double-A leagues. For Richard Urena to be included is an accomplishment in itself.

So that gives us some hope. But what should we expect from him at the major league level? Is he the starting shortstop of the future? My feeling is that yes, he can be a league average regular if he continues to make gains defensively. He has the athleticism to be good in the field and if he can cut down on some mental errors his glove should carry him to a major league career.

Will he hit? That’s a bit more of a mystery. Being so young, he still has a lot to learn about pitch recognition and will be facing some elite secondary pitches – something he wouldn’t have seen much of in New Hampshire. He’s also a switch hitter, which comes with its own unique learning curve.

Everyone loves comparables so I’ll throw a couple out there, one at each end of the spectrum.

The first is at the lower end. Alcides Escobar. He’s carved out a major league career for himself in Kansas City based on his value defensively and on the base paths. But he’s been one of the worst hitters in baseball. He can’t take a walk, doesn’t hit for power nor average. This is a potential outcome for Richard Urena too and the glove and speed might not be as good as Escobar’s.

For a comparison closer to home, Richard Urena might end up being Ryan Goins.

On the high end, I’m looking at a shortstop like Didi Gregorius. Like Urena, he never hit for much power in the minors, had only a smattering of stolen bases, but could make good contact and held his own defensively at a premium position.

What makes Gregorius so valuable now is that he’s been able to tap into a new level of power. And I think it’s possible Urena has more pop than his minor league track record suggests.

Observe his first career home run against Alex Wilson of the Tigers on September 8th.

The home run had an exit velocity of 99.8 mph – but more impressive was the fact that it was to the opposite field. Urena stayed back on the fastball and flicked it without much effort over the left field wall. That’s an impressive bit of hitting from a 21-year old facing a 5-year major league veteran with a career 3.03 ERA.

Will he turn into a 20+ home run and 4 WAR player like Gregorius has this season? Well, probably not, as that’s one of the best case scenarios for a player with Urena’s profile. But there appears to be untapped potential and in the last two weeks Blue Jays fans have been treated to a hint of it.

Good shortstops don’t just grow on trees and this Dominican native could prove to be one of former GM Alex Anthopoulos’ more savvy international free agent signings. In the short-term, he should offer the Jays a backup option to the oft-injured Troy Tulowitzki next season. Longer-term, he might be stealing Tulo’s every day job.