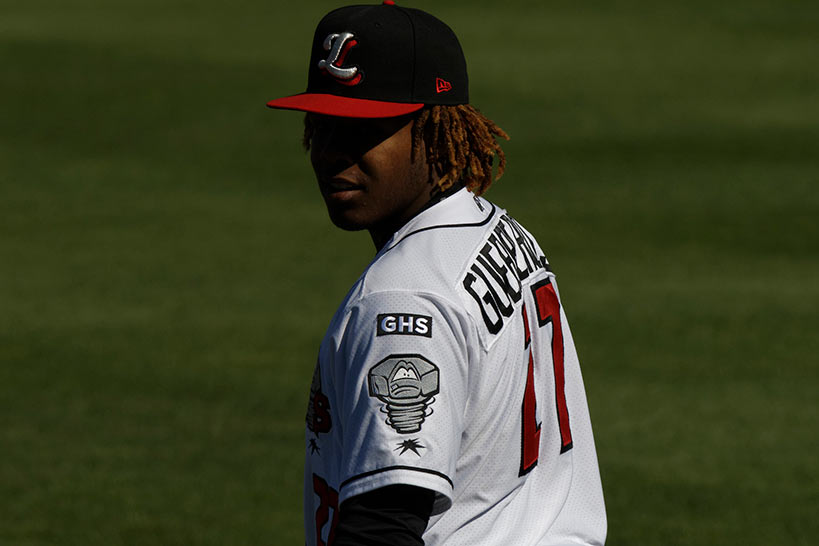 There are quite a few remarkable elements to Vladimir Guerrero Jr‘s rise from 15-year old International prospect to one of the most exciting hitters in the minor leagues. Whether its his legendary home run derby in the Dominican Republic in 2014…

To his insane combination of plate discipline and hitting ability as a teenager in his full season league debut, his rise through the ranks has been almost flawless.

What’s remarkable about his latest promotion, however, is his production in a pitcher-friendly league. A few years ago MiLB.com looked at run environments in the minors and noted that the Florida State League had the lowest average Runs per Game, Home Runs per Game, Slugging Percentage and OPS among all the full-season minor leagues. It was as pitcher-friendly as it gets.

This year, among players in the FSL with 150 or more plate appearances, Guerrero ranks 1st in BB/K rate. Notice the ages of his peers too.

His swinging strike rate is just 7.5%, 18th lowest among the 157 players who have reached the 150 PA threshold. And his 180 wRC+ ranks 1st among that group. The next best wRC+ for a teenager in that league with more than 100 plate appearances? His teammate, Bo Bichette, with a 148 wRC+.

Oh, and if you’re wondering how long it’s been since a teenager had a 180 wRC+ or better (min. 150 PA) in the Florida State League, it was eight years ago.

Historically speaking, Guerrero’s current pace is impressive. His .456 OBP leads FSL players (min. 150 PA). The last time a teenager posted a higher OBP in the FSL was 19 year old Nick Johnson of the Yankees system in 1998, nearly two decades ago.

And if we expand our comparison to the other two Advanced-A leagues, the only other teenage prospects to post an OBP of .400 or better at that level in the last 12 years are:

It’s a small list that includes MLB All Stars. And only Montero had a lower strikeout rate than Guerrero’s current 14.4%. What he’s doing is not just notable, it’s downright amazing. As an 18 year old he’s making baseball look like an easy game. It’s not.

Vladimir Guerrero Jr’s production might not dip much even after a promotion to Double-A New Hampshire (which looks like it’ll happen next season) as it’s a hitter-friendly environment relative to other Eastern League ballparks. So even if we need to take his offensive numbers in 2018 with a grain of salt, he’s already proven to solve a pitcher-friendly league in the FSL.

The jump from single-A to double-A has confounded many prospects in the past. And it’s extremely rare for a teenager to reach AA and play a considerable amount of time there. Only 4 position players in the last 4 years have made 100 plate appearances in AA before their 20th birthday – Ronald Acuna, Ozzie Albies, Raul Mondesi and Jake Bauers.

Vlad Jr. is poised to spend the season there in 2018 as a 19 year old and join that list. There is also a chance he sees time at AAA and it’s not even out of the realm of possibility a September call-up is in his future next season.

It’s been a while, but it finally looks like the Blue Jays have a position player prospect who is the real deal.