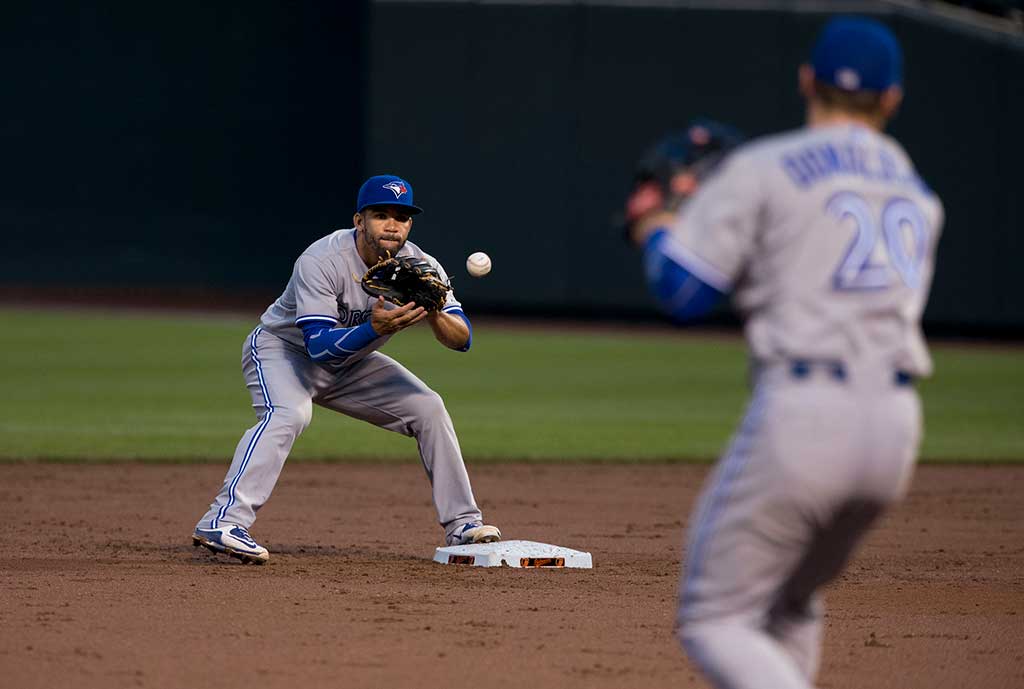 With the news that Devon Travis’ season may be all but over as he recovers from another knee surgery, the Jays will need to turn their attention to the trade market to fill his spot in the lineup. A lot can happen between now and the non-waiver trade deadline of July 31st, and it would appear that GMs around the league don’t have much interest in making significant trades yet. It’s still relatively early and teams haven’t decided if they’re buyers or sellers.

That shouldn’t stop the Jays from making calls though. The status quo of Goins starting and Barney off the bench isn’t going to cut it.

Perhaps the perpetually rebuilding Oakland A’s would be a good match for the Jays. The Tigers have lost three straight and are in danger of falling out of the Wild Card race. The Pirates are still hanging around in what’s been a weird NL Central race but six games under .500 suggests they’ll struggle to remain in the thick of things.

Below are some potential second basemen the Jays could target, along with their contract status and team’s standings heading into action tonight.

Lowrie’s seen a significant uptick in his production this season and the A’s are going nowhere. However, the team option for 2018 might be tempting for the small market A’s to pick up as it would be a bargain if he were able to provide them with similar production next year.

If they decide to try and sell high instead, the Jays should listen. He’s running a .358 OBP this season which would be a improvement over Pillar in the leadoff spot. While defensive metrics haven’t loved his work at second base (-10 Defensive Runs Saved and -4.4 UZR/150 for his career) his bat would be a major upgrade over Goins. His contract is such that it shouldn’t handcuff the Jays from making more moves before the deadline should they choose.

The Pirates might want Harrison’s salary off the books in 2018 (and for the rest of 2017 for that matter) if they don’t plan on contending. He’s owed a pro-rated $7.75M salary this season and $10.25M next season. Aside from his outlier 2014 when he was worth 5 wins above replacement, Harrison has mostly been a serviceable second baseman who brings speed and batting average. He’s not a spectacular player but he wouldn’t be much of a drop off from Travis’ production either.

GM Neal Huntington found a match with the Jays last season when he dealt Francisco Liriano and his contract to Toronto, which also had a year and change remaining on it. Maybe the Jays don’t get the same prospects along with the player this time, but Harrison would be enough of an improvement on his own to make it worth it. He also has the ability to play some outfield and third base – flexibility that could be useful as the season wears on.

The Mets season has been a complete disaster and it’s only a matter of time before they throw in the towel. Walker has been a consistent producer throughout his career, with above average power and on base skills. Before hitting the DL last week, he was putting together another typical season, slashing .270/.352/.468 with 9 home runs and a 10.2% walk rate.

But complicating things is the hamstring injury he suffered. It didn’t look good, and he’s expected to miss about a month. Hamstrings have a way of lingering and he would have to look 100% by late July. But the Mets have a number of pending free agents and will probably try to ship them out for prospects while looking towards contending next season.

The Tigers aren’t out of the race yet and will probably wait until much closer to the deadline to make any significant roster moves. If they’re within striking distance of a Wild Card spot (as most AL teams are right now) it’s unlikely they move Kinsler. He’s their leadoff hitter ahead of a potent lineup that features Miguel Cabrera, J.D. Martinez, Victor Martinez and Nick Castellanos. Kinsler’s positional backup Andrew Romine would be a significant downgrade as the every day second baseman.

Further complicating things is Kinsler’s no trade clause, which he apparently used last season as leverage to insist on a contract extension from teams that were interested in acquiring him. A trade obviously never materialized and the scenario could very well play out again this summer. If an extension is a hard requirement for Kinsler to move teams, the Jays would almost certainly be out.

The Padres have bottomed out and the rebuild is well under way. But that doesn’t necessarily mean General Manager A.J. Preller is finished adding more prospects. Solarte isn’t the most obvious trade candidate because of his very team-friendly contract and solid production. The Padres can keep him around for another three years, presumably within the timeline of being a competitive club.

But if a team is willing to offer a top pitching prospect, the thought of adding a third name next to Anderson Espinoza and Cal Quantrill on the prospect list might be too tempting to pass up. Padres starters this year have combined for a 4.96 ERA which is 5th worst in the majors. The most promising young pitcher on the staff right now might be 24 year old Luis Perdomo (4.97 ERA, 4.53 FIP) and he profiles more as a middle-to-back of the rotation starter.

As good as Solarte is, he’s not a star as his career slash line of .271/.334/.420 indicates. But if one season plus an option of Logan Forsythe garnered one of the Dodgers’ top pitching prospects in Jose De Leon over the winter, Solarte might be worth a prospect close to that pedigree given his contract and team control.

A long-term commitment at second base doesn’t appear like a fit in Toronto but if the Jays don’t have plans to extend Donaldson past his final contract year in 2018, Solarte has played third base and could move over there eventually.

Dozier seemed like a more likely trade candidate before the season when the Twins were projected to be awful. To the surprise of almost everyone, the Twins are currently holding the second Wild Card spot in a tie with the Tampa Bay Rays and are above .500. Yeah we didn’t see that one coming either. Paul Molitor’s group has performed better than the sum of their parts. But that negative 44 run differential portends an eventual fall down the standings. Expecting a team giving up an average of 5.31 runs a game to make the postseason probably isn’t realistic, and if they slide prior to the deadline Dozier’s name will come up in trade rumours again.

The Dodgers wanted him over the winter but wouldn’t meet Minnesota’s asking price. Would the Jays give General Manager Thad Levine what he wants? It would be a short-term gamble for Toronto and wouldn’t be a popular move if the Jays went on to miss the postseason. They would most likely need to part with one or two pitching prospects like Sean Reid-Foley, Jon Harris, Conner Greene or T.J. Zeuch.

Dozier is under contract for 2018 too, which would complicate things if and when Travis is healthy in the lineup. The only other position Dozier has played with any regularity is shortstop, but that was five years ago and the position is blocked by Troy Tulowitzki anyway.

Eric Sogard is hitting the ball extremely well and I have no idea why. Nothing in his career numbers indicates he had this ability. He’s running a .180 isolated power mark which is almost 100 points higher than his career rate. His walk rate has doubled and his strikeout rate has remained excellent. There’s an element of luck in his .350 batting average as evidenced by that .386 BABIP but that doesn’t explain the plate discipline gains. And even if/when some balls stop dropping for hits, he still has room to be a positive contributor.

The Brewers as a whole are probably the biggest surprise in baseball this year. If you had them leading their division this close to the All Star break I would’ve called you a liar, or assumed that the entire Chicago Cubs roster were abducted by aliens. But, here we are. And as long as they remain competitive it’s unlikely they move players. Sogard’s rest-of-season projections via ZiPS and Steamer don’t think he’s for real either, so the Brewers probably aren’t getting anything of value in a trade for him anyway.

Those are some names that could be targets for the Jays but it’s a group bereft of a perfect fit. There isn’t much of a market for position players this year and the Jays may try to fill Travis’ absence through Goins, Barney and AAA middle infielder Jason Leblebijian. I’m not sure that’s a wise gamble though. The organization doesn’t seem particularly high on Leblebijian and at 26 he’s old for a prospect.

Ryan Goins is performing worse than a hypothetical replacement level player (-0.4 fWAR, -0.6 rWAR) and filling his spot with even just a league average player could result in an extra one or two wins in the standings. Given the tight state of the AL Wild Card race, those might come in handy in October, no?

But they need an improvement now. Waiting another 4-5 weeks and hoping Goins plays over his head is foolish. And as long as hitters like Martin and Pearce keep getting on base ahead of Goins in the 9th spot, he’ll continue to be a rally killer. Having Kevin Pillar hit 9th and slotting in a new second baseman to hit leadoff is the ideal scenario. Whether or not Ross Atkins can pull it off without parting with significant prospect capital is another story.