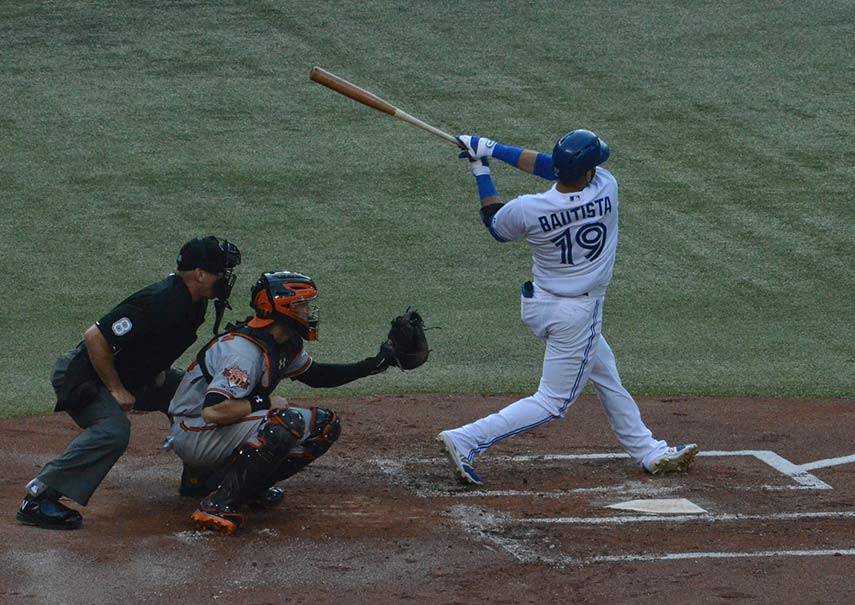 The phrase “good pitching always beats good hitting” is one of the more common oversimplifications in the baseball lexicon. It states the utter obvious, that the most common result of an at bat is an out. It gets a lot of play in the postseason especially, when the games are important and narratives need to be squeezed out of small sample sizes. A few good performances by a team’s pitchers is usually enough to uphold this generalization.

No better example of that in recent memory was last year’s ALCS. The Jays’ strong regular season offense was rendered useless by Cleveland’s pitchers and their steady diet of curveballs, sliders and change-ups. It wasn’t just the Jays who struggled either, as the Cubs would find out in the World Series.

Russell Martin especially had trouble. 12 plate appearances ended on breaking balls or offspeed pitches in the ALCS. Here were his results:

In fairness to Martin, pitchers like Andrew Miller and Corey Kluber have breaking balls that are an unholy brand of nasty. But it was other, not as good, pitchers like Josh Tomlin and Jeff Manship who also gave the Jays fits:

The ball actually bounced in front of the plate and was never close to being in the zone at any point.

Edwin Encarnacion had 10 at bats end on breaking/offspeed pitches. He had 1 hit, 1 walk and made outs in the other 8.

All six of Jose Bautista’s at bats that ended on breaking/offspeed pitches were outs, with 4 Ks (3 swinging).

Melvin Upton Jr., Justin Smoak and Devon Travis all combined to go 0-for in their 6 at bats to end on breaking pitches (with 4 strikeouts).

You get the point. Middle of the order bats were stymied. Michael Saunders and Josh Donaldson were the only key hitters to fare well against breaking stuff (.671 wOBA and .427 wOBA respectively). The Indians clearly had a game plan to throw a lot of breaking balls, especially on 2-strike counts, and it worked perfectly. The Jays weren’t able to adjust in time despite being one of the better hitting teams most of the year.

Now, in small sample sizes these numbers don’t always mean much, if anything. Unfortunately, it looks like these troubles have carried over into the first two and a half months of 2017.

Turning to the Fangraphs leaderboards for Pitch Type Value, we see the Jays have a bit of a problem.

For an explanation of Pitch Value, read this: http://www.fangraphs.com/library/offense/pitch-type-linear-weights/

Curveballs and sliders have not been friendly to Jays hitters and the team ranks near the bottom of the majors in production against those pitches. Drilling down further, we can see the individual numbers.

Their struggles may not be lost on the opposition either. Martin is seeing the highest percentage of sliders since his rookie season in 2006. 13.8% of the pitches Morales is seeing are curveballs, which is well over his 10.4% career rate. 20% of the pitches Tulo is getting are sliders, the highest mark since 2011. Pearce is getting 26.4% sliders, way up from his 17.8% career rate. Slider and curveball usage against Pillar are both up from last season.

So this makes sense. The Jays have historically been a great fastball hitting team and now pitchers are throwing them fewer fastballs. It could be a coincidence that so many players haven’t hit offspeed pitches well and the numbers will adjust over time – after all, we’re not even in July yet – or it could be a team-wide approach that needs to be fixed. Perhaps part of the responsibility falls at the feet of hitting coach Brook Jacoby. It’s not like it wasn’t recognized earlier in the year either, as a few players made a point to take extra reps in the cage against curveballs in the season’s first two weeks:

With the bats ice cold through a 1-7 start to the regular season, several veteran Jays, including third baseman Josh Donaldson, right fielder Jose Bautista, and catcher Russell Martin, were in the cage getting some work.

The dial on the pitching machine was changed from fastballs to curve balls however giving Jays hitters a look — albeit slower — than the breaking balls that have been bothering them early in the season.

The Indians’ advanced scouting prior to the ALCS last year proved superior and it’s possible that other teams are following that blueprint this year. The Blue Jays’ walk rate is also way down – they rank 11th in the AL – after leading the league in each of the previous two seasons. And against left-handed pitching their 91 wRC+ ranks 9th in the AL. Hitting lefties was always a specialty of this group.

There are many familiar faces on the team this year yet so many unfamiliar results. Another contributing factor could simply be age. Players like Bautista, Martin and Tulo don’t appear to be the same as they were in their primes. Skills diminish, bat speed wanes, and past levels of production just aren’t possible. If age is at play here there isn’t a whole lot the players can do about that. But if there are patterns and habits they can recognize from opposing pitchers, maybe some extra time in the video room instead of the cage will cure what ails them.