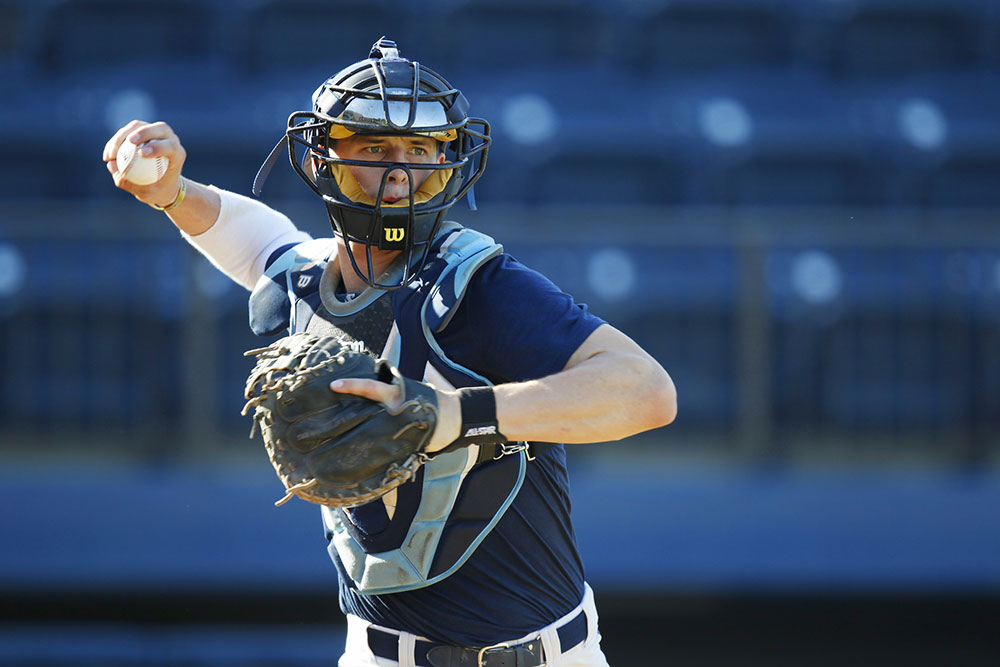 Riley Adams is a 6’5″ catcher from the University of San Diego. Athletic behind the plate, he still needs refinement. His obvious calling card is the 60/70 grade raw power.

Adams was a solid catching prospect coming out of high school, a very flexible athletic backstop who is a black belt in karate. While some worry that he’s lost some of that behind the plate, some success with his bat, coupled with the usual dearth of college catching, should help this University of San Diego backstop come June.

A Cape Cod League All-Star, Adams has shown some ability at the plate and he’s increased his power output in each of his three years as a starter at San Diego. Some of that has come because he’s a good guess hitter and pulls balls out of the park, but some scouts feel he has become too spread out at the plate with his Kris Bryant-like stance.

In the past, he has shown solid defensive skills and a solid arm, though reports out of the Cape and this spring about his defense have not been overwhelmingly positive. Adams is big and strong; the raw power is legitimate. The team that feels it can get him back to tapping into it with a better setup at the plate, not to mention helping him refine his defensive play, will take him off the board in the top three rounds.

Baseball America had this to say about him in May:

“He has so many tools that the pro people are just dreaming on him,” Hill said. “He’s 6-foot-4, 225 pounds getting off the bus and looks like Adonis. Start there.

“Then there’s the arm strength and the power and the makeup. He’s got everything. When he walks through the gate, all eyes are on him.”

While professional observers note Adams for his athleticism and plus arm strength, they also see a need to polish his receiving and presentation behind the plate.

Offensively, Adams displays above average power and a good sense of the strike zone. Adams has been putting up better numbers than any USD player not named Kris Bryant, who hit a school-record 31 homers with 62 RBIs in 2013 on the way to being named College Player of the Year.

John Sickels even mentioned that he expected him to garner late 1st or 2nd round consideration:

Adams did enough this spring to move into second round consideration, although a team that believes in his defense and ability to maintain his hitting at higher levels could be tempted to take him in the back half of the first round. Finding catchers who can hit is never easy.

2080 Baseball has some video of Adams from March: