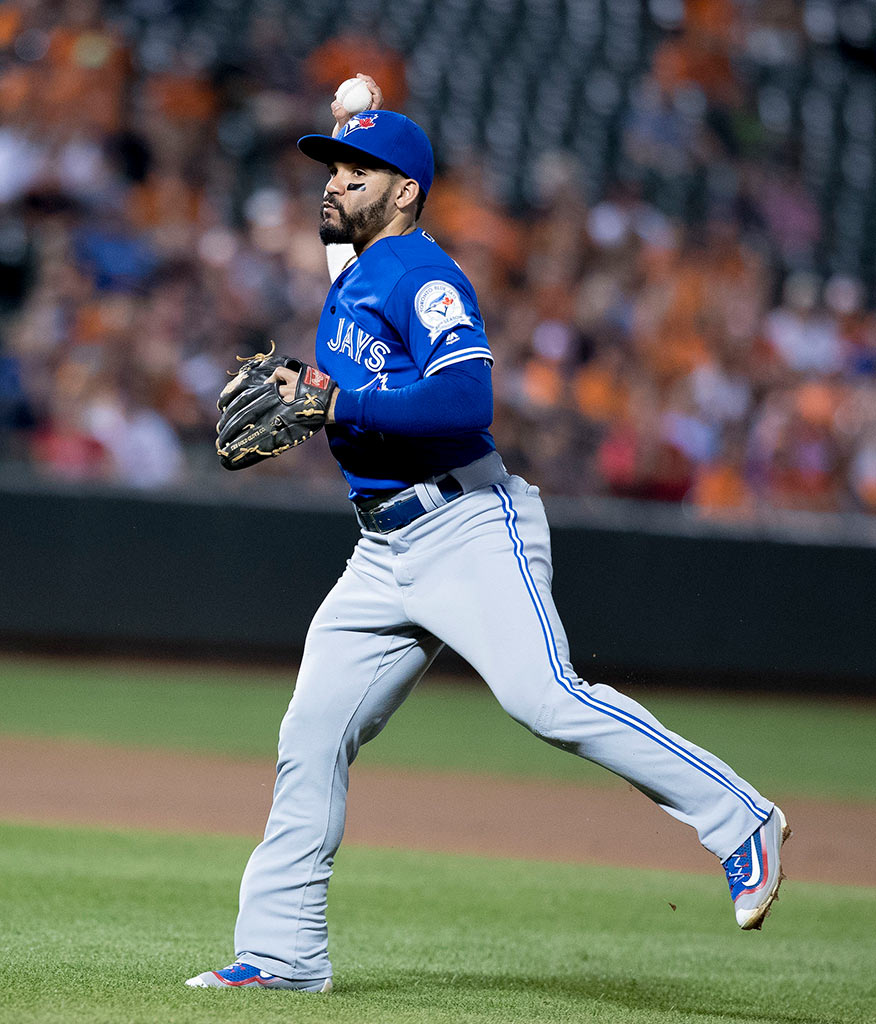 Devon Travis landed on the DL (again) today with what is described as a “bone bruise”. How concerned should the Jays be and do they need to make a trade?

Update (June 13, 2017): According to John Gibbons, Travis underwent a surgical procedure “today or yesterday” to clean up cartilage and that “It’ll be a while”.

You might recall his season-ending knee injury in October last year was also described as a bone bruise. And, because Travis seemingly has no luck at all, it is noteworthy to point out today’s diagnosis is of that same right knee. Not good.

Travis had surgery in November last year and was shut down for the entire winter. Fingers are crossed that he doesn’t suffer a similar absence this time around but initial word isn’t promising.

Devon Travis says the bone bruise, and the pain that comes with it, is similar to his issue from last year. Will next see a specialist in NY

This is a significant loss for the Jays regardless of how much time Travis misses. After a dreadful start to the season Travis put together a 13 game hitting streak in May and had a slash line of .408/.427/.718 over his last 45 plate appearances.

No, it wasn’t a sustainable run – as evidenced by poor plate discipline (1 BB to 15 K) and a .472 BABIP begging for regression. But even when Travis would have slowed to a more realistic pace at the plate, good production could still be expected from him.

Not so for his backup, Ryan Goins.

To say that Goins is a “glove first” player is an understatement. His glove, in fact, is the only reason he’s on a Major League 25-man roster. And even then, that’s a stretch.

Defensive metrics are not perfect. Even the most ardent proponents of things like UZR or DRS can’t claim them as the be-all and end-all of defensive measurements. We’ve long since moved on from valuing stats like Errors or Fielding Percentage, but there’s still work to do (Statcast, to the rescue!)

Until that time, people may not agree on the value of a player like Ryan Goins. That’s fine. But one thing that’s plainly obvious is that whatever his value is, it is derived entirely from his work in the field. His offensive statistics have been, literally, the worst in baseball.

No, that’s not hyperbole! See for yourself. Among all qualified MLB players since Goins came into the league in 2013, he ranks 311th in wRC+. Last place. His .264 wOBA is tied for last place with Alexi Amarista.

For a team with postseason aspirations, running a player like Goins out there every day isn’t going to cut it. That might fly on a rebuilding team like the Padres or White Sox, who don’t really care what their record is today and might even be secretly hoping for losses to improve their 2018 draft position. But how can the Jays justify saying that Goins’ glove is enough to keep him in the lineup? In my opinion, any benefit his defense brings is completely wiped out by his inability at the plate. Fangraphs’ Wins Above Replacement agrees, as evidenced by his career 0.2 WAR.

Carrying a replacement level player on the roster to backup such an injury-prone starter as Travis seems irresponsible.

The Blue Jays have climbed back into the postseason picture (going into games on Tuesday June 6th, they were 2.5 GB of a Wild Card spot). Now with a healthy Tulowitzki and Donaldson back, they can’t afford to trot out a back end of the lineup with Carrera, Goins and Maile. In order for this club to overcome the blisters and arm troubles of the starting rotation and consistently win games, they’ll need all the help they can get at the plate.

I’m not suggesting they sell the farm for a temporary upgrade. Sending the Twins a top prospect for Brian Dozier, for example, would feel like a knee jerk reaction. But Travis has a history of injuries and it’s inconceivable to think there isn’t an upgrade somewhere out there to be had over the worst hitter in baseball, currently employed by the Jays.

Help appears thin on the farm but 26-year old Jason Leblebijian has played 19 games at second base for AAA Buffalo and is currently hitting a healthy .313/.383/.525 in 201 plate appearances for the Bisons. However he is not on the 40-man roster and a move would need to be made in order to promote him.

Jed Lowrie of the Athletics is having a solid year – his 1.6 fWAR is 5th among qualified MLB second basemen – and the Jays have a trade history with Oakland. He’s under team control through 2018 via a $6M team option ($1M buyout) and it’s possible that the A’s would jump at the chance to cash in on his trade value, as minimal as it might be.

Ian Kinsler doesn’t seem like he’s long for the Motor City, what with an expiring contract (plus 2018 option) and his best days behind him.

There aren’t many more obvious trade candidates, which is understandable given that the season is still fairly young. But the Jays don’t have the luxury of waiting until the trade deadline if Travis is on the shelf for an extended period of time. They’ll need an improvement far sooner than that.

Goins’ slick glove in the field is a joy to watch. And he genuinely seems like a great teammate and person. But the numbers speak for themselves and it’s time to end this experiment. This probably won’t be the last time Travis hits the DL either and the Jays need a more capable second basemen to step up in his absence.