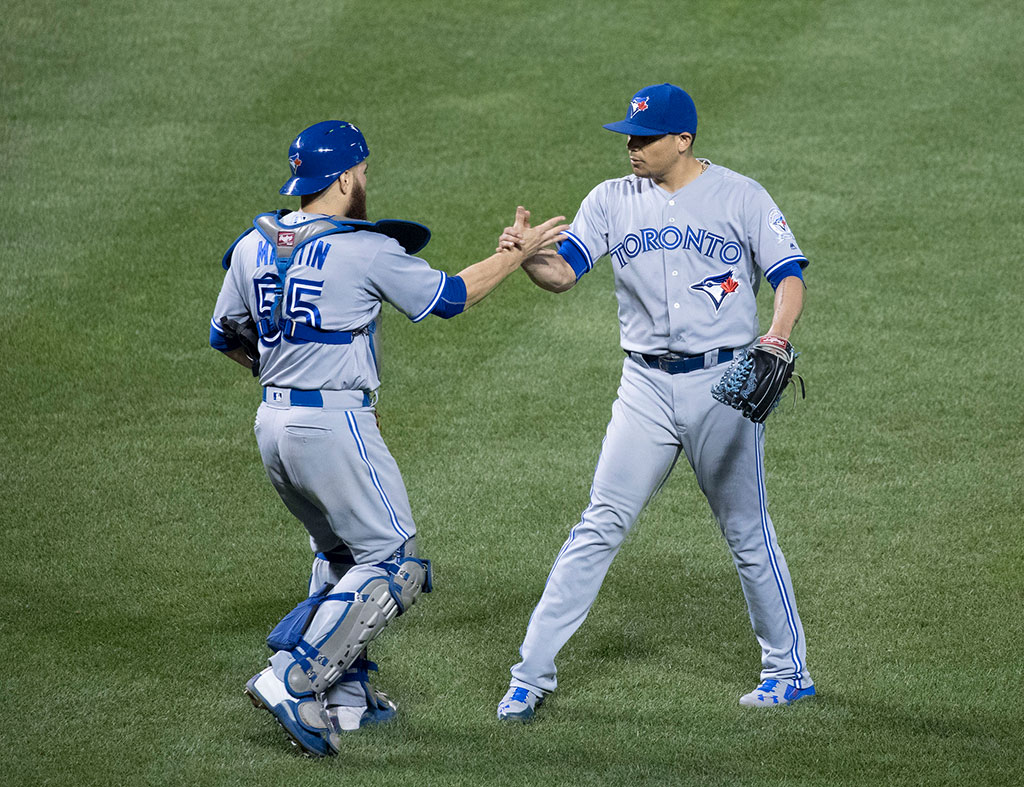 It’s early, but one (of the many) Blue Jays who hasn’t gotten off to the start he would’ve wanted is closer Roberto Osuna. His 5.63 ERA through the first 8 games and 50% success rate in save opportunities has cost the Jays games in the standings. Since he broke into the league as a 20-year old in 2015, he’s been one of the better relievers in baseball. So should we be concerned with his early struggles?

While the ERA looks ugly he’s had worse 8-game stretches in the past: And he’s clearly been able to quickly right the ship. He could do the same thing again in short order. Hitters’ exit velocity against him is actually 1.4 MPH lower in 2017 than it was in 2016. And his 2.63 FIP this season is below his career average of 3.09. So maybe he’s just been a bit unlucky. Maybe.

There are some differences worth pointing out, however.

He started using his sinker a lot more in October last year and that trend has continued. The sinker has a 6.6% usage rate for his career but it’s gone up to 32% in 2017.

I’m not sure that pitch warrants such high usage either – its swing and miss rate is the lowest of all his pitches at 11.1%. Let’s look at velocity now, which may be the most concerning change for Osuna: It’s worth noting that only six other relief pitchers accumulated more than Osuna’s 143.2 IP across the previous two regular seasons (he also added 17.1 postseason innings for good measure). That’s a pretty heavy workload for any reliever, especially one who went under the knife for Tommy John surgery four years ago.

To put it in further perspective, Osuna logged 141 innings in four years between 2011-14 and 161 innings in just the next two seasons (including postseason). He is throwing far more than he’s even been used to in his young career.

Some of his postseason appearances have been high stress situations too. In 2016 he made 4 appearances in 5 days against the Indians in the ALCS. In his previous 3 postseason outings (1 vs the Orioles, 2 vs the Rangers) he was asked to get more than three outs each time.

The Blue Jays cannot afford to have a mediocre version of Osuna this season or, at worst, an injured version. He already experienced what the Jays called a “cervical spasm” in April and did not have a good showing at the WBC.

Many pitchers have come back from a Tommy John surgery and had long careers. But his health and velocity in the early going of 2017 suggests that some caution is needed with their young reliever. That might be easier said than done as John Gibbons hasn’t had a very good bullpen to rely on – the Blue Jays 4.35 FIP among relievers is 11th in the AL. Passing on Osuna in occasional save situations would be difficult to justify. Jason Grilli has the next most recent closing experience but something doesn’t look right with him either (10.38 ERA, 7.3 BB/9).

Ryan Tepera saved 18 of 20 games for the Bisons at AAA last season. Joe Smith has 26 saves on his resume since 2014. Joe Biagini remains a reliable option even though he’s never been used in a regular closer’s role.

Now I’m sure the Blue Jays’ High Performance and Medical staff have far more data and better ways to measure risk factors than the public does, especially when it comes to their own pitchers. So it should be interesting to see how they handle Osuna and whether he can bounce back or not. The Blue Jays are certainly counting on him.