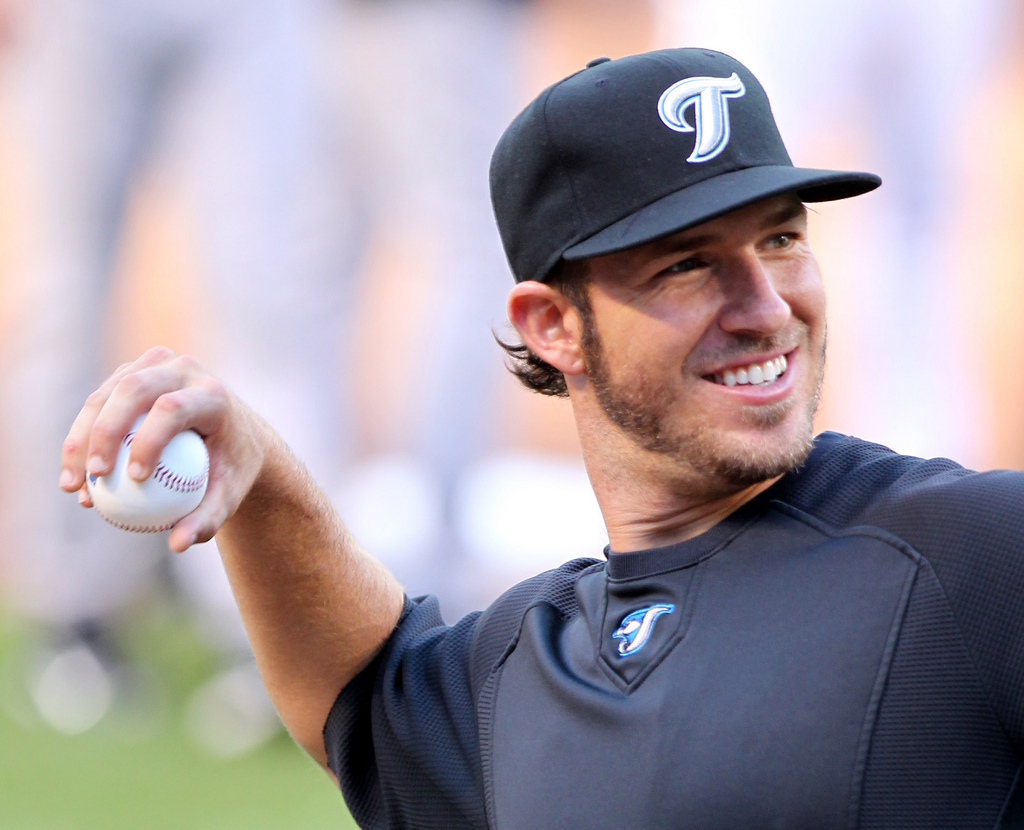 Hyperbole in the title, you say? Perhaps. But I’m going somewhere with this.

With news of JP Arencibia hanging up the cleats and calling it a career, one can’t help but think back to how he entered the league. It was a moment that every kid who has ever stepped onto a diamond has dreamed of: On August 7th, 2010, with Edwin Encarnacion standing on second base in the second inning, Arencibia stepped up to the plate batting 9th. He promptly put one over the left field wall on the very first pitch he saw.

Arencibia finished the day with one of the most ridiculous MLB debuts ever – 4-for-5 with two home runs and two doubles.

The Jays thought they had found their catcher of the future. After John Buck, their starting catcher in 2010, had moved on as a free agent to the Marlins after the season, Arencibia was given the starting job. He had a decent season for a rookie, slashing .219/.282/.438 and a slightly below average 91 OPS+. But instead of improving upon those numbers he followed it up with an almost identical 2012 season, going .233/.275/.435 with a 90 OPS+.

The low batting averages and poor plate discipline were concerns. His work behind the plate also had its warts but he was still just 26 years old.

That offseason then saw a franchise-defining four and a half weeks that would shape the club for years to come.

At the time, Alex Anthopoulos had done an excellent job accumulating pitching talent in the minors in a very short period as GM. Feeling the time was right to parlay some youth into experience and make a push to compete in the AL East, he made a blockbuster deal with the Marlins, getting Josh Johnson, Mark Buehrle and Jose Reyes. Not long after, Jays fans were hit with another blockbuster, this time with the Mets.

The Mets wanted a catcher and a pitcher, both young enough to grow into their roles on a rebuilding Mets ballclub. Travis d’Arnaud and Noah Syndergaard were the main pieces that netted the Jays R.A. Dickey, the reigning NL Cy Young Award winner.

Now it stands to reason that the only reason the Jays were comfortable parting with d’Arnaud was because they felt confident in Arencibia’s future as a major league starting catcher. d’Arnaud was a top prospect, both in the organization and across all of Major League Baseball. Baseball America ranked him 17th overall before the 2012 season, the third best catching prospect in the majors. Teams don’t give up on that type of upside at a premium position very often. Arencibia’s presence almost certainly factored in to that decision.

He was below replacement level that season and was no longer looked at as a long-term solution behind the plate.

But what if this downturn happened a year earlier? Do the Jays part with d’Arnaud for Dickey in the offseason? If talks between Anthopoulos and Mets then-GM Sandy Alderson had turned towards a catcher, I don’t imagine Arencibia would’ve moved the needle much. (I’m not sure he did anyway in reality)

Without a top catching prospect going to the Mets, it’s hard to imagine the Dickey trade happening at all. In which case maybe Noah Syndergaard, he of the highest average fastball velocity and current contender for the “best pitcher in baseball” title, might still be in Toronto.

The Blue Jays non-tendered Arencibia after that season and he never played another game for the organization. Three years later, he has retired from the game altogether.

This isn’t a criticism of Alex Anthopoulos’ tenure in Toronto. Although one could find holes in several of the trades and decisions he made, AA gave Jays fans postseason games for the first time in two decades. The man probably never has to buy a drink again in Toronto, and rightly so.

The hypothetical future could’ve gone completely differently. Maybe with a disappointing 2014 season and a young potential ace in Syndergaard still in the organization, Anthopoulos wouldn’t have pushed his chips all-in a season later when he traded for Troy Tulowitzki and David Price. Perhaps recognizing that he had a potential rotation full of studs (Noah + Stroman, Sanchez, Norris and Hoffman) he took a more patient approach.

Of course it’s anyone’s guess how things might have unfolded. Maybe instead of back-to-back ALCS appearances, the Jays are still trudging through the postseason drought today. Maybe they didn’t feel a need to sign Russell Martin in free agency and maybe they didn’t trade for Josh Donaldson. Who knows?

Or, maybe they managed to get a taste of playoff baseball anyway and now look ahead with one of the most feared rotations in the game.

The point of this exercise isn’t to necessarily say the Blue Jays would be better off had they not dealt for R.A. Dickey. But the swing of potential realities in the time since the 2012-13 offseason is vast.

Trades and signings don’t happen in a vacuum. Every decision a GM makes is within the context of what’s happened before, where the team is currently at and what its future looks like. It’s a fun exercise to speculate but ultimately we’re all just guessing.

And hey, maybe the Marlins trade never happened either if such an important position as catcher was so uncertain in 2012. If that was the case, the chances of a different path being taken are far more likely.

Regardless of where the Blue Jays are right now in these parallel universes, JP Arencibia may have unwittingly played a major role in shaping the team’s future. I’m sure he doesn’t care. He’s probably planning now for a life after baseball and hopefully he is successful in his endeavours. But for fans who choose to look back and ask “what if”, Arencibia’s quick rise and fall is an important sign post at a fork in the road of the franchise’s history.