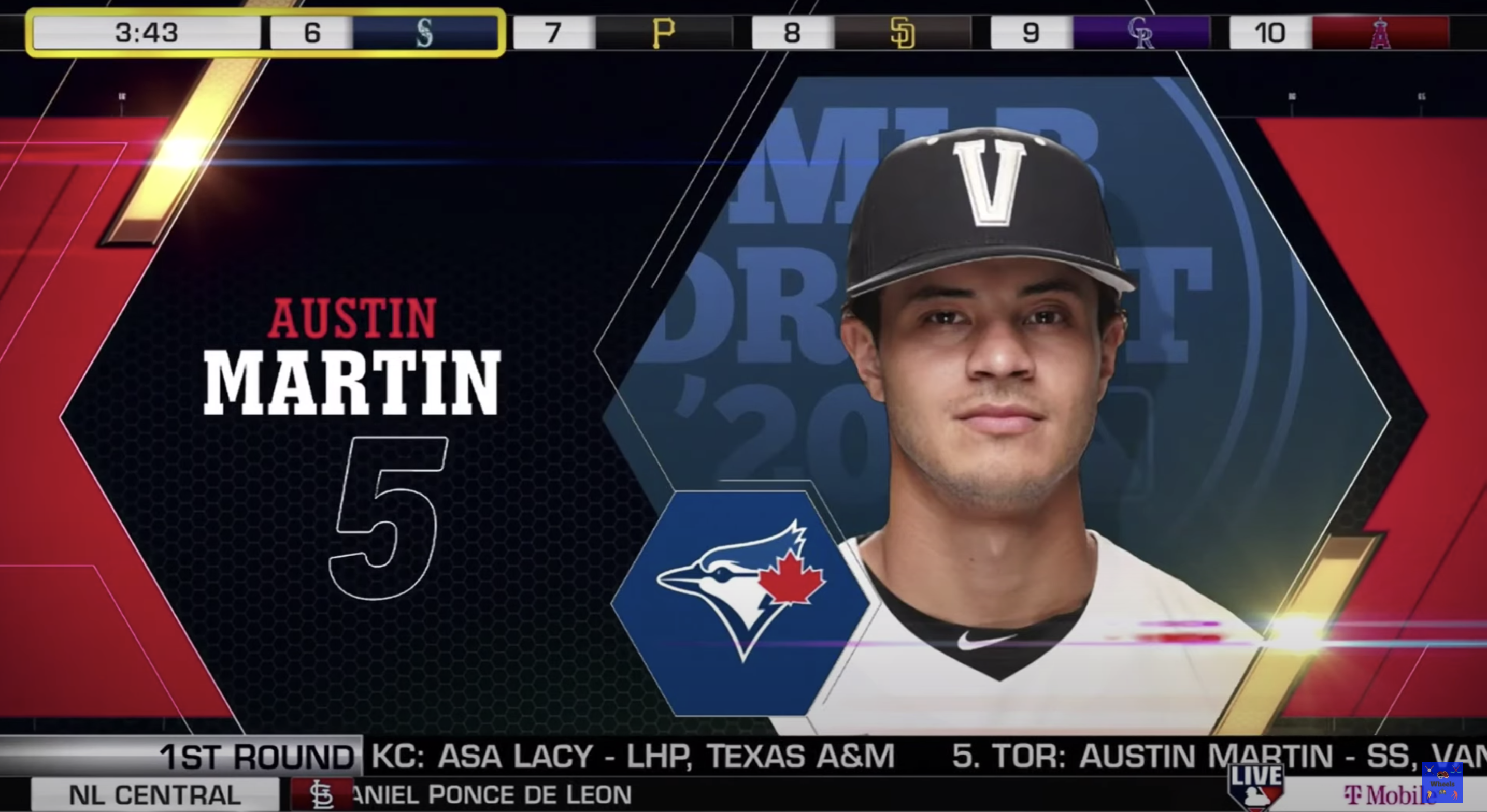 In what was a shock to Blue Jays fans, and most observers, Vanderbilt’s Austin Martin was available when Toronto came calling with the 5th overall pick. Mock drafts started getting torn up by the second pick after the Orioles went under slot and chose Heston Kjerstad, but I didn’t expect Martin to be available three spots later. Yet here we are!

And here are the reactions from some notable baseball people. Let’s start with what Baseball America had to say (subscription required) immediately after the pick, as it also includes Martin’s scouting report for those not familiar with him.

Instant Analysis: The strength of the Blue Jays’ young talent is position players, but it’s hard to pass on Martin when the No. 2 player in the draft (and one who wouldn’t be out of place going 1-1 overall) is available with the fifth pick in the draft. Martin is one of the most accomplished, polished players in the draft, offering a promising mix of upside and safety amidst a draft that’s been filled with uncertainty. Where Martin fits best in the field is still in question, but he’s one of the elite hitters in the class with power trending up.

Scouting Report: A first team All-American and Golden Spikes semifinalist after an outstanding sophomore season in which he hit .392/.486/.604 and was third in the country in hits, Martin has long been one of the favorites for the first overall pick in the 2020 draft. Martin has some of the best pure hitting ability in the class, with eye-popping bat speed, excellent contact ability and impressive plate discipline as well. Martin also appeared to be increasing his power production. He hit eight home runs as a sophomore after tallying just one in his freshman season. He hit three in 16 games in 2020 before the season was canceled, with the best isolated slugging percentage of his career (.286). Some people have thrown Dansby Swanson comparisons on Martin, as both are at the top of their respective classes and Vanderbilt products, but without spending any time at shortstop, it’s perhaps more misleading than accurate. There aren’t many 1-1 candidate prospects who made position changes during their draft-eligible seasons, so perhaps Ian Happ is a better comparison in terms of tools and defensive versatility, though Martin’s contact ability and presence in the box are superior to Happ’s at the time. After spending most of his time with Vanderbilt at third base, Martin moved to center field after a few games this spring. He also played center field with USA Baseball’s Collegiate National Team, and while he doesn’t have elite speed or the best first step, he has the instincts and athleticism to handle the position. Martin is more of a plus runner than a true burner, and while teams would have liked to see him handle shortstop, it is concerning for his pro potential at the position considering he wasn’t the shortstop on his college team. Even if Martin doesn’t wind up at shortstop, he has the defensive ability to become an asset at a premium position, whether that’s in center field, third base or second. While there are questions about his future defensive home, Martin’s offensive resume is as impressive as any in the country, with the ability to hit for high average, draw plenty of walks, hit for extra bases and also be a disruptive runner on the bases. His profile is as complete as it gets in the 2020 class.

The surprise wasn’t felt just by fans, either.

.@keithlaw ranked Martin as the draft's top prospect over the weekend. Just now on MLB Network, Dan O'Dowd says #BlueJays got the best player in the draft.

.@austin_martin99 on being picked by #BlueJays:

"Once I heard my name selected, I went numb for a little bit."

"I'm a former teammate of Bo Bichette's when I was younger."

Keanan Lamb of Baseball Prospectus highlighted his exceptional ability at the plate:

Those traits [versatility, athleticism, and an advanced hit tool] still rang true this spring, with multi-hit games in half his games played in the shortened season. The power appeared to be developing, too, using a naturally lifting swing that he doesn’t have to increase effort to generate bat speed. The single-best ability Martin possesses is an uncanny knack to recognize pitches with laser precision of the strike zone. In 15 games before the shutdown, he struckout only twice and had a grand total of four swinging strikes.

Keith Law, who some feel still has a grudge against the Blue Jays (insert eye roll emoji) loved this pick for the Jays.

"I think they've got the best chance to get an offensive superstar — certainly of any college player in the draft."

And more from Law (who thinks Martin could even start next year at Double-A New Hampshire):

Austin Martin slipped to No. 5, but @keithlaw says he's the best player in the 2020 #MLBDraft class.

Get to know Martin, selected by the Blue Jays ⤵️ pic.twitter.com/VrGslWhKkU

Dan Connelly of The Athletic did a rundown of the newest Blue Jay (subscription required) and heaped praised on Martin’s character and leadership abilities.

Last fall, Martin had the opportunity to become a leader and work with Vanderbilt’s younger players. He was held out of scrimmages because of a minor knee issue, but instead of watching from the dugout, he was in the coach’s box, instructing his teammates.

“Just him being there, coaching, helping, talking to guys, talking them through different situations,” said Ray, Vanderbilt’s senior second baseman and Martin’s former youth teammate. “I just saw him truly mature, truly saw what he could do as a leader with that opportunity. It was pretty cool for me to just sit there and see like the 6-year-old I knew and then truly see him turn into this great player, this great person and great leader.”

While Martin deserves all the ink he’s getting for his bat and makeup, it’s worth nothing how much positional versatility the Jays are getting. FanGraphs calls Martin a “Swiss Army Knife who plays several” positions. The Jays already have a couple potential-core players capable of playing both infield and outfield in Biggio and Gurriel. Martin adds to that flexibility in a big way.

How his development path from here on out will go has yet to be decided. But the school he’s coming from is on the leading edge of incorporating tech and analytics into player development, according to Eno Sarris:

Here was a major-league prospect, talking about how he couldn’t wait to return to his collegiate program so he could access the best technology to shape his swing. How is that possible? Wouldn’t you assume the multi-billion-dollar industry would have the best of everything? Yet at least three college programs — the University of Missouri, Vanderbilt, and Wake Forest — are on the cutting edge, ahead of plenty of MLB teams.

Vanderbilt is currently the toast of college baseball after winning its second national title in six seasons this past June. Wake Forest, a regional champion in the 2017 NCAA tournament, is ranked 17th going into this season. Missouri has 104 wins in the three seasons since it joined the SEC, managing a .370 OBP on the back of coach Steve Bieser’s tech-forward approach.

This was the highest the Blue Jays have picked in the draft since they took a Texas high schooler by the name of Vernon Wells in 1997 (You might have heard of him!). So this was a pick they really needed to hit on. And even though it’s easy to get caught up in the early hype and excitement on draft day – MLB Network did comp him to Mookie Betts and Anthony Rendon – all signs are pointing to the Jays acquiring another stud hitter and franchise building block.

The moments after the #BlueJays selected Austin Martin, including a conversation with his college coach, Tim Corbin, on @MLBNetwork:https://t.co/y2oDKVtY82

The @BlueJays are going to be an exciting team for a long, long time. They select Austin Martin of the @VandyBoys. Toronto *already* had one of the best position player cores in @MLB. Great night for baseball in Canada. 🇨🇦 @MLBNetwork

The Blue Jays selected shortstop @Austin_Martin99 with the 5th overall pick in the 2020 MLB Draft. @ArashMadani, @ShiDavidi, @bnicholsonsmith, and @ArdenZwelling tell you all you need to know about the Jays’ newest addition. pic.twitter.com/XcD6r5JImI

So rejoice, fellow Jays fans. And go watch some highlights of your new (Vandy) Boy! (and follow him on Twitter)