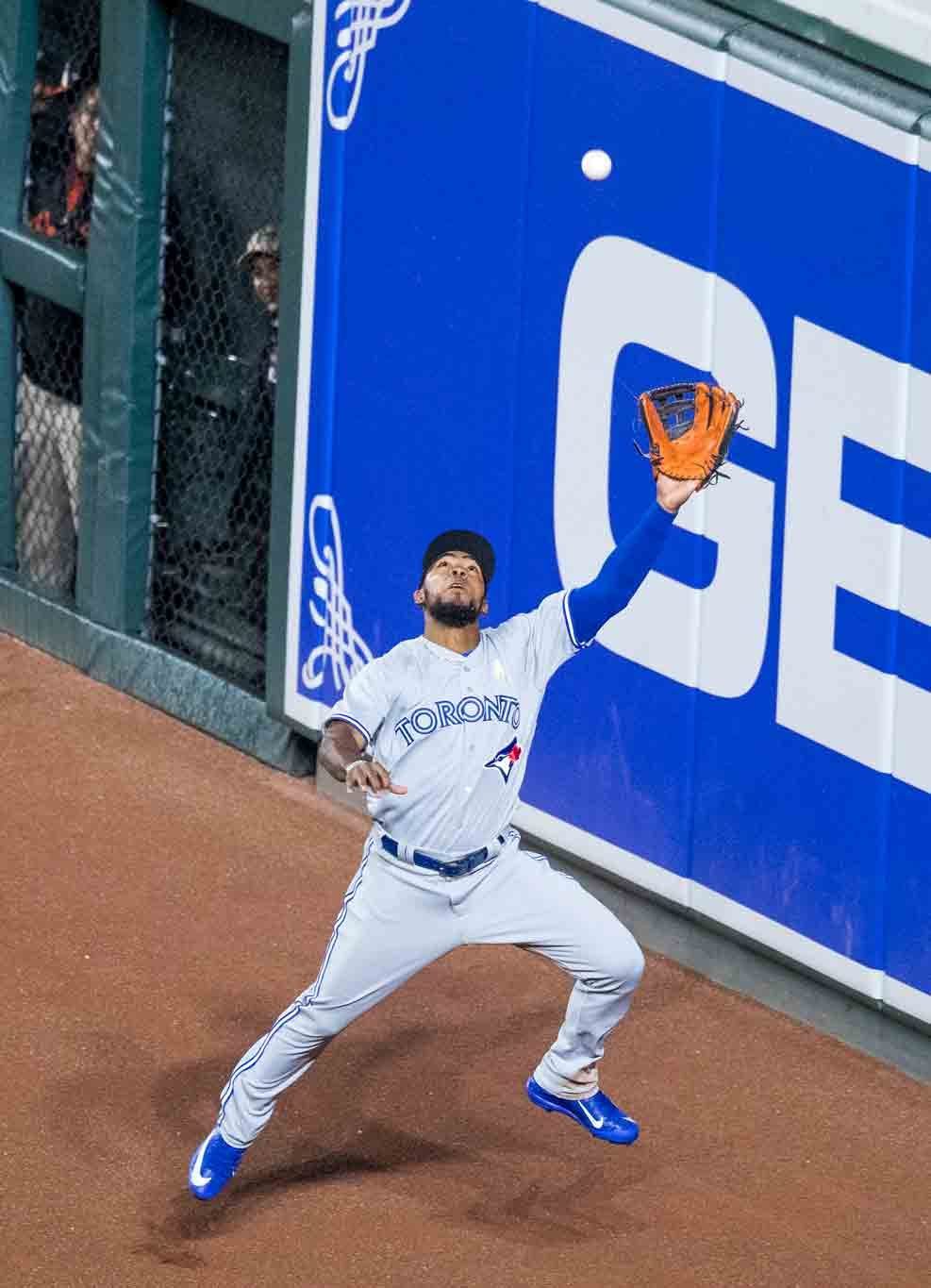 Not since the days of Reed Johnson have the Toronto Blue Jays been blessed with a plus, every day left fielder. Rajai Davis turned in an adequate 2012 season but was gone a year later. The mere mention of Danny Valencia, Melky Cabrera, or Ezequiel Carrera may elicit unsavoury memories of fielding misadventures. The Chris Colabello Experience (or Experiment, if you prefer) ended in a performance-enhancing drug suspension and a sudden inability to hit baseballs. It has not been pretty.

So bear with me for a moment and take in this sad table, sorted by Defensive Runs Saved (DRS).

By DRS or UZR/150 (Ultimate Zone Rating per 150 games), the Jays haven’t had much in the way of competent fielding at the position for the past five full seasons. It doesn’t appear like Teoscar Hernandez is going to change that either. Fans have been subjected to head-scratching moments when he’s been required to play balls hit in his direction – here are merely a few.

Joe Mauer hit the ball hard, but this was still a very catchable ball. As you’ll see later, the data suggest that going back on balls hit behind him is not Hernandez’s strong suit.

We get two for the price of one here. Like the last play, the ball was struck well but Hernandez gets to the spot in plenty of time. Not only does the ball clank off his glove but he heaves it in the general direction of the diamond, seemingly unconcerned with whatever happens next. Hitting the cutoff man is optional, right?

Hernandez misjudges the ball off the bat. Adam Jones hit it somewhere in between a line drive and a fly ball, a “fliner” if you will, but nothing about this play should have been particularly difficult.

This one is more of a line drive. Outfielders will tell you that a hard liner directly at you is one of the toughest plays to read, so we could cut Hernandez some slack here. But it’s still a mistake. And when he realizes his mistake, the ball has travelled too far for him to recover.

His body is even turned the wrong way, requiring a twist to his left before retreating.

It’s plays like these that lead some to question if Hernandez has the instincts necessary to play every day in the outfield. However, there is one attribute he possesses that helps him in the field. He can run. Fast.

Statcast measures his Sprint Speed in the 92nd percentile, and tied for 2nd fastest among 37 left fielders (min. 25 opportunities). That closing speed is what allows him to make straight line plays like this one on May 2nd in Anaheim.

According to Statcast, this 102 mph line drive from Luis Rengifo had an expected Batting Average of .630. Diving catches make highlight reels while plays like this do not. But Hernandez’s speed is what allows him to catch this and remain upright. It’s also the reason he made this sliding grab.

If we know that Hernandez can cover ground in the outfield, are his mental mistakes really enough to pull down his defensive value to such awful levels? Statcast suggests there’s something else at play.

Outs Above Average (OAA) is a relatively new fielding metric that Statcast defines as the following.

In 2018, Hernandez posted a -7 OAA. Of 91 outfielders with 150 or more fielding opportunities, that mark ranked near the bottom at 78th. OAA can be broken down further by direction, which is helpful in this analysis. A visual representation of Hernandez’s OAA last season in one graphic: 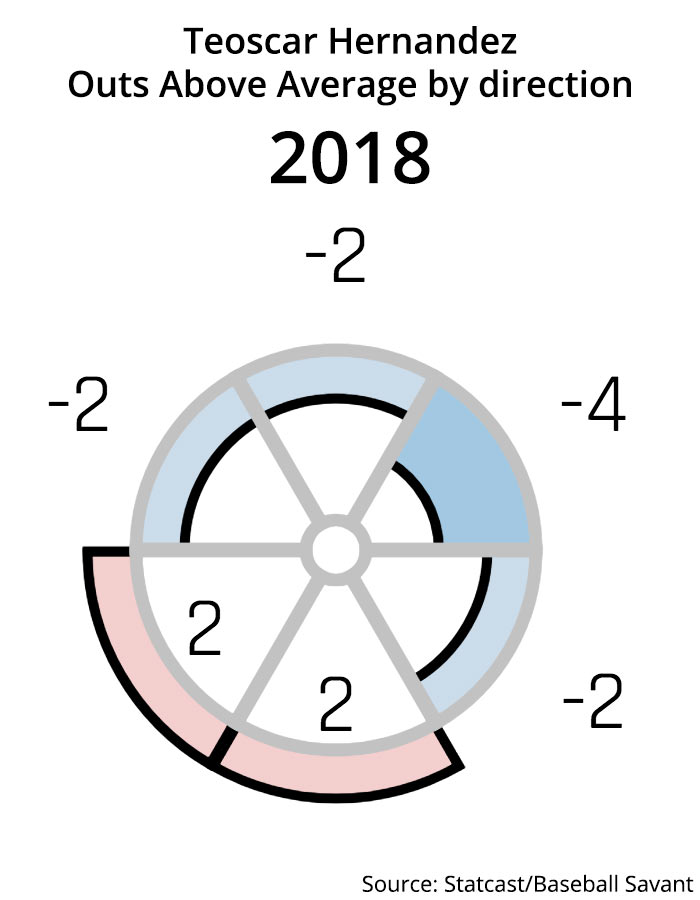 It’s clear that he was making more of a negative impact on balls hit behind him than ones hit in front of him. Could this have been partially due to a positioning issue? Charlie Montoyo thought so, and implemented a change as first-year manager that had all three outfielders playing deeper than they were in 2018.

That wasn’t the only issue. Hernandez’s -4 OAA on plays back and to the right was tied for the worst mark among MLB outfielders in that direction. So naturally, Montoyo has had Hernandez playing five feet farther to the right on average this year to compensate for the perceived weakness. 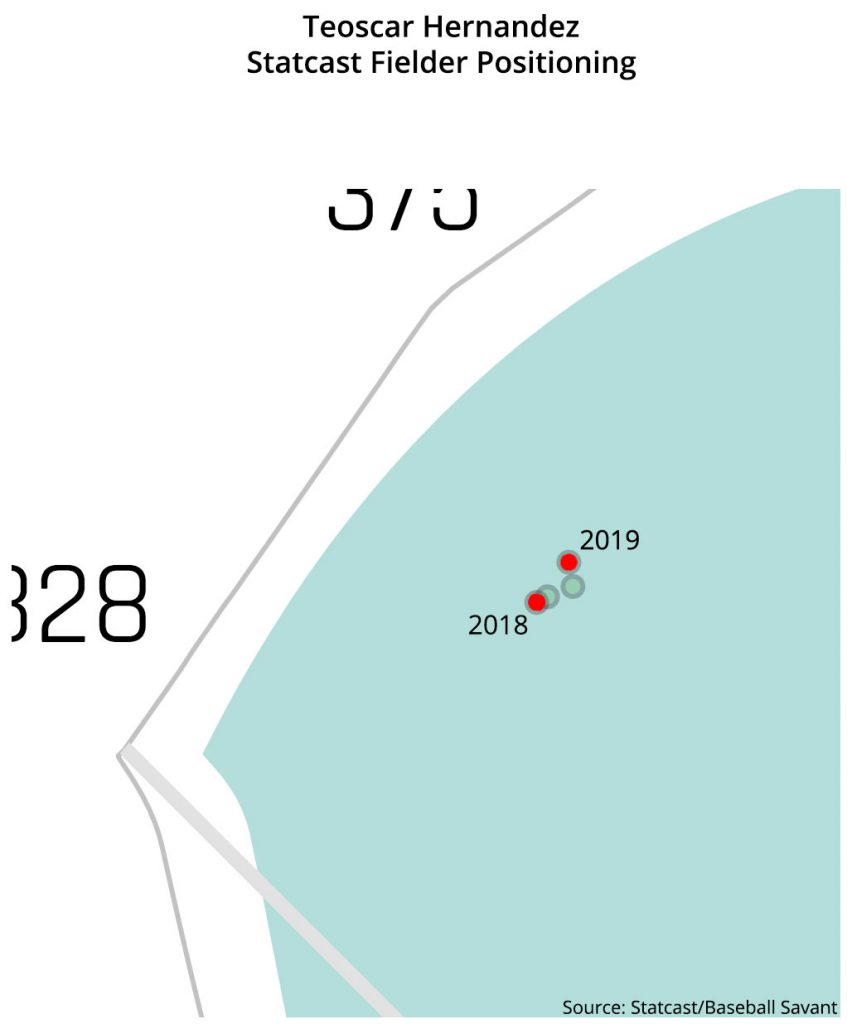 It appears to have helped. While he’s amassed less than half the number of innings he did last year, his 2019 OAA is much improved. 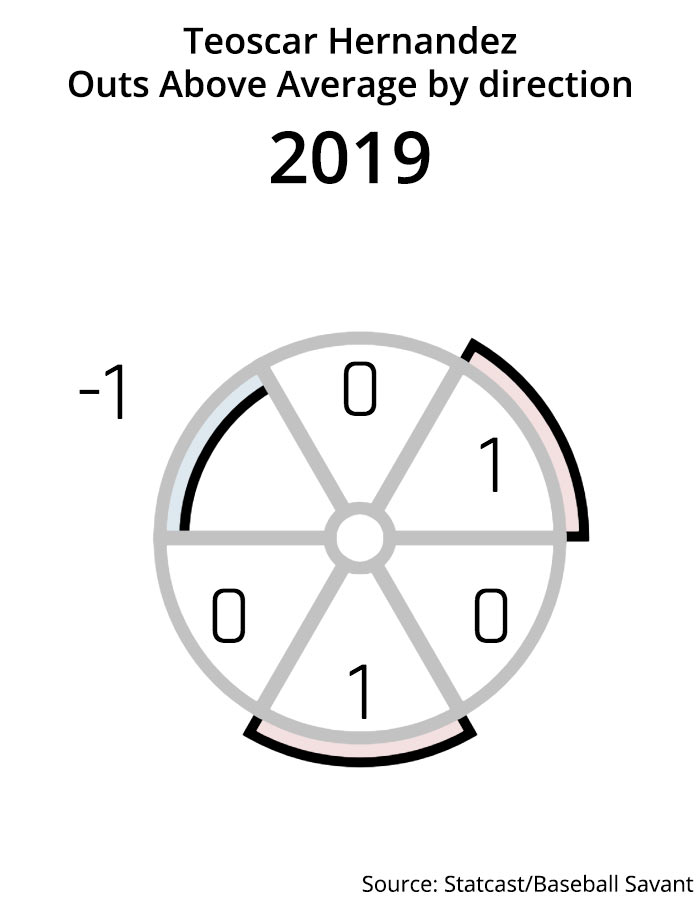 We have to be careful with defensive metrics in small sample sizes. Fielders haven’t had many opportunities and so the reliability of the stats is questionable. That said, OAA isn’t the only measure that produces a positive outlook for Hernandez. His 1 DRS ranks 7th and his 20.2 UZR/150 ranks 1st among 23 left fielders as of May 31st (min. 250 innings).

One component of UZR also has Teoscar at the top of the left fielder leaderboard, and that’s his 3.5 ARM (Outfield Arm Runs Above Average). Scouts always liked his throwing abilities enough to put a 50 or 55 future grade on it, and it’s been an asset for him in 2019. This double play in April against the Twins was ruled safe, but overturned on video review.

Was that a smart play by Max Kepler to try and tag up? Definitely not. But give credit to Hernandez for being aware and making a good throw. Next up is a play against the Rays this year where Avisail Garcia tries to tag up and score.

No, he’s not suddenly an elite left fielder. But there are reasons for the big statistical improvement.

The real Hernandez is likely somewhere in between his 2018 and 2019 stats. Improved positioning in the field has helped. The added experience might have made him more comfortable and confident. There’s reason for optimism, and his defence might not drain him of whatever value he ends up providing at the plate.

He is still a work in progress, evident by his demotion to Triple-A Buffalo in mid-May. The organization has made positional flexibility a point of emphasis with its young players, so relegating Hernandez to a traditional DH role is unlikely. And the fact that he’s being challenged in Buffalo by starting more in centre field (7 games) than left field (4 games) suggests that the Blue Jays are far from giving up on him as an outfielder.