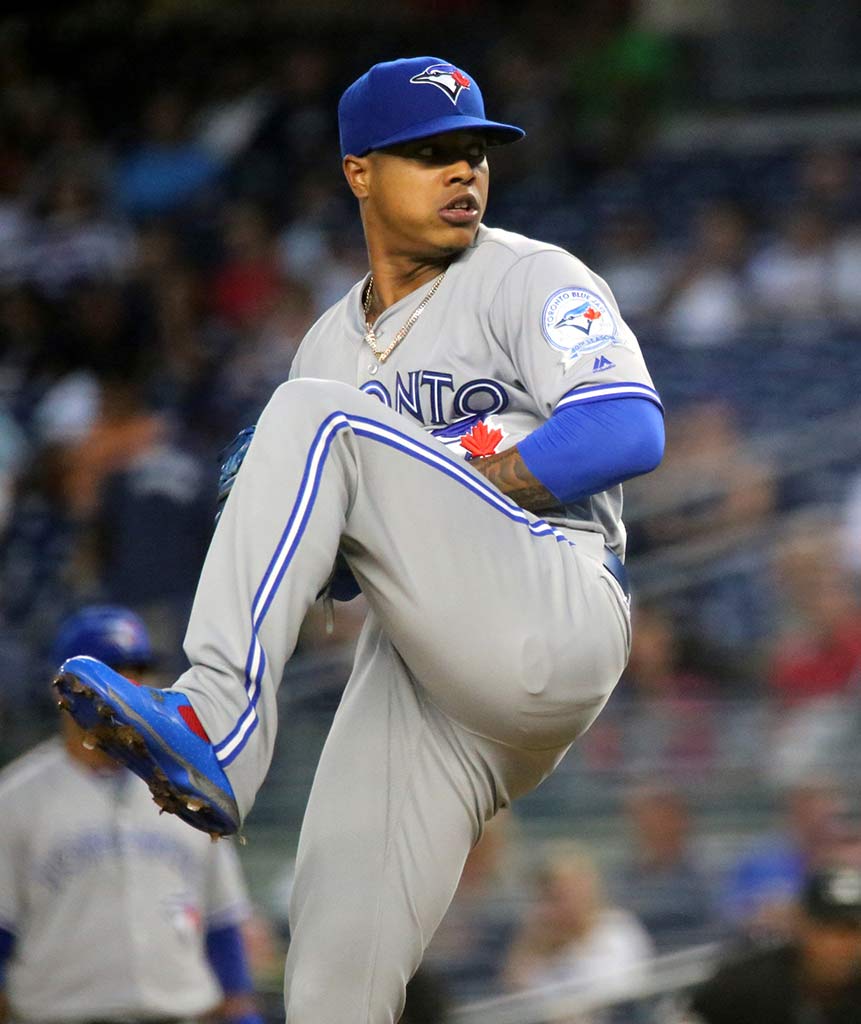 You’ve probably heard by now that Buster Olney thinks Marcus Stroman is the “logical choice” to market if the team is sellers at the deadline. If that sounds like a crazy idea, don’t worry. You’re not alone.

Generally, teams that are out of the playoff race as they approach the July 31st non-waiver trade deadline are most interested in moving players on expiring contracts instead of letting them walk for very little*. It’s in their best interest to get something of value while they can. Players like Stroman on the other hand, who have three more seasons of team control before hitting free agency, are moved less often at trade deadlines for obvious reasons. They’re good, they’re cheap and under contract for a while longer.

*the new Collective Bargaining Agreement signed last winter lessened the penalty teams have to pay in order to sign free agents who turn down qualifying offers. Teams under the luxury tax would need to surrender only a 3rd round pick. The old system required them to surrender their non-top 10 first round pick. More info: http://m.mlb.com/glossary/transactions/qualifying-offer

There would be a lot of teams lining up to ask the Blue Jays what the cost would be to acquire Stroman. The Pirates’ Gerrit Cole and the A’s Sonny Gray have been the subject of trade rumours as well. Both pitchers have two more seasons of club control. But if Stroman’s name is out there as potentially being available as well, it’s likely that his name goes to the top of that list. Both Cole and Gray have ace upside just like Stroman, but have been inconsistent recently.

Who wouldn’t want Stroman? He’s a fierce competitor, pitched the game of his life in the World Baseball Classic Final, is 26 years old, has a 3.80 ERA and 3.51 FIP for his career, and doesn’t have a history of arm problems.

If the Jays do shop players who are under contract past 2017, we can assume it’s a sign that a rebuild of some kind is coming. However, it may not be a traditional “let’s tank and draft high” multi-year plan. The Astros, after dropping the 2005 World Series to the Chicago White Sox, went through a lengthy period of losing before finally becoming a legitimate contender in 2015. That’s probably not going to be the Blue Jays’ plan. After growing the fan base and leading the American League in attendance this season and the last one, finishing poorly for the next 3-5 years would erode that momentum.

If the Jays do take a step back, they’ll hope to follow the script of the Brewers who, after trading veterans like Carlos Gomez, Mike Fiers and Jonathan Lucroy for prospects, are surprisingly competitive in just the second year of their rebuild.

But would trading Stroman be the best way to approach a change in direction? The first question they’ll need to ask themselves is will they be competitive before 2021, the year Stroman is eligible for free agency? If they don’t see that happening, then they’re wasting Stroman’s best years on a losing club. Might as well trade him sooner rather than later, while he’s healthy and productive.

But I tend to think the Jays could contend again sooner than that. The timeline for Vladimir Guerrero Jr. and Bo Bichette appears accelerated. Sean Reid-Foley, despite dropping out of Baseball America’s top 100 midseason list, remains in my eyes a mid-rotation starter if he can harness his command. Perhaps as early as 2018. Pitching prospects T.J. Zeuch and Conner Greene might end up in the bullpen, which wouldn’t necessarily be a bad thing. Having a couple youngsters who can touch 97 and 98 with their fastballs in short outings would fit with the growing trend of filling the back-end of bullpens with fireballers who can miss bats.

There’s a considerable amount of risk with prospects, and penciling in a lineup a year or two in the future is a fool’s errand. Don’t believe me? Just have a look at the projected lineup Baseball America did in 2012.

We dreamed of a 2015 rotation headed by Ricky Romero with Sergio Santos as the closer. Yeah. That didn’t work out.

The organization today is not overflowing with young talent. At least not talent at the higher minor league levels where the risk is lower and you can project their future with a little more confidence. So some trades will obviously need to happen. Turning the expiring contracts of Jose Bautista, Marco Estrada, Francisco Liriano and Joe Smith into futures would be a start.

But if I were the Jays, trading the younger pitchers like Stroman, Aaron Sanchez or Roberto Osuna would be at the bottom of my to do list. And if I were to rank those three in terms of “untouchables”, I would have Stroman at the top, followed by Osuna and Sanchez.

We all love Osuna, but a good starting pitcher is generally more valuable to a team than a good reliever. And Sanchez? Well, he’s represented by Scott Boras, an agent with the hardline reputation of squeezing the most money out of teams and favouring free agency instead of signing extensions. And while the Jays were throwing cold water on the critical comments Boras made prior to the season about how the team handled contract negotiations, one has to wonder if this will factor into a decision as he approaches free agency in 2021. The likelihood Sanchez remains a Blue Jay may be pretty low.

The final reason I wouldn’t be in a hurry to shop Stroman at the deadline would be that there could be more teams in the offseason showing interest. A team like the Mets, who are enduring a nightmare of a season but still intend to contend next year, could have interest in the winter. Or perhaps the Giants, a team also in the midst of a disappointing season, would look to refuel in the offseason and make a push for another title with Stroman in the rotation. An elite ground ball pitcher like Marcus would certainly do well with an infield defense of Crawford, Panik, Belt and Arroyo behind him.

There are certainly scenarios where a return for Stroman would fit into the Blue Jays’ plan for the future. But pitchers this good, and this healthy, don’t just grow on trees.

If the front office thinks that fans will stomach three or more years of losing to achieve a rebuild, a Stroman trade is all the more likely. But I don’t think they do. I think the strong fan support is a tool Shapiro and Atkins will use to keep payroll high and the team competitive through any retooling phase. A period that Stroman will likely be a part of.