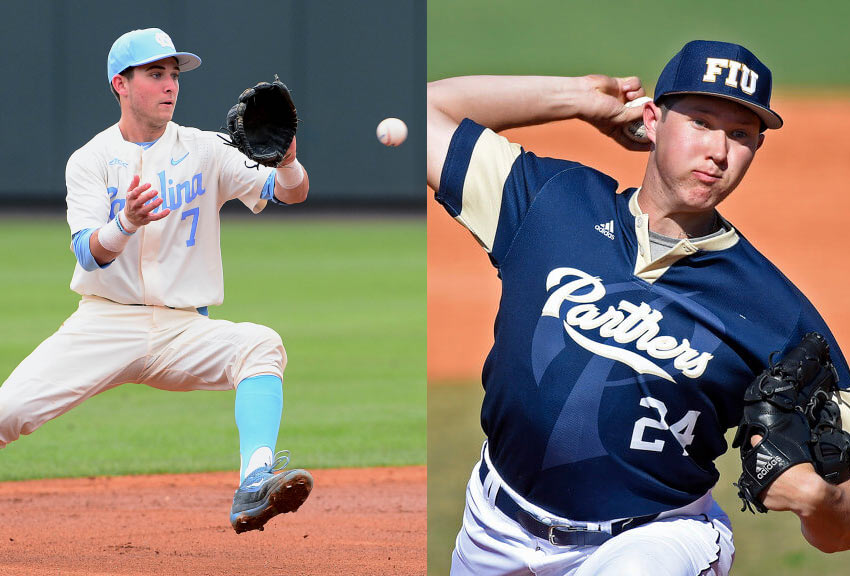 In the First Round of the 2017 MLB Draft, the Blue Jays selected Logan Warmoth at 22nd overall and Nate Pearson at 28th (the compensatory pick for Edwin Encarnacion signing in Cleveland).

Warmoth is a shortstop playing at the University of North Carolina, who many think can stick at the position long-term. A mix of good all-around tools and a polished approach, his stock has risen consistently to push him to the top of the college SS ranks.

ESPN’s lead prospect analyst Keith Law thought of him as a potential top 10 pick in the draft. The Jays may have another hard hitting bat in their lineup one day, and one that plays a premium position.

MLB.com had this to say about him:

Warmoth took over North Carolina’s shortstop job a month into his freshman season and hasn’t relinquished it. After a solid summer offensively and defensively in the Cape Cod League last summer, he has stepped up his game this spring and should be the first college middle infielder drafted. He has a good chance to go in the first round, which would make him the sixth Lake Brantley High (Altamonte Springs, Fla.) product to do so, following big leaguers Jason Varitek, Felipe Lopez, Rickie Weeks, Jemile Weeks and Nick Franklin.

While Warmoth doesn’t have a standout tool, he also doesn’t have any obvious shortcomings. He’s a gifted hitter who controls the strike zone, handles good velocity and uses the entire field. He started to show some power toward the end of his sophomore season, and has enough to hit 12-15 homers per season in the big leagues. Warmoth has solid speed and the savvy to use it on the basepaths. His instincts and quick hands help him make plays at shortstop, and he’ll get the chance to play there as a pro. With average range and arm strength, he’s probably better suited for second base.

Here’s some video of him:

At 28th overall, the Blue Jays took the flame-throwing 6’6″ right-handed pitcher Pearson. As a senior in high school, his fastball was sitting in the low 90s. As a JUCO, the velocity shot up to triple digits, which he can hit consistently. His slider is his second best pitch after the 70 grade fastball and he profiles more as a bullpen arm who could move fast through the system and make an impact in the major leagues.

Pearson still wants to develop as a starter, and I’m sure the Jays will give him that opportunity. But current grades on his secondary pitches are below average so he’ll need to make some big gains in that department.

He also had a screw inserted in his elbow in high school so there is the obvious injury-risk disclaimer.

Here’s what MLB.com had to say about him:

It’s a good year for hard-throwing pitchers in the Florida junior college ranks, with a few who have the chance to go in the top three rounds. Pearson put up video-game type numbers at Central Florida this spring, raising his Draft profile in the process, then created a huge amount of buzz by hitting triple digits consistently in a bullpen session in late May. There is no question about the quality of Pearson’s fastball coming from his 6-foot-6 frame. He was consistently up to 97 mph all spring and has shown an ability to throw strikes with it as well.

His secondary stuff, however, has been inconsistent. He throws both a slider and a curve, though the latter is his fourth pitch, and on some days he has two distinct, effective breaking balls. At other times, they run together, and it might serve him well to focus on just one at the next level. His changeup has improved, but it also comes and goes.

There is an injury history with Pearson — he had a screw put in his right elbow in high school — but he’s been nothing but healthy and durable in junior college. There’s some debate over whether his future lies in the rotation or out of the bullpen, where his stuff would play up, but there’s bound to be a team that believes he can start that will take him in the early rounds.